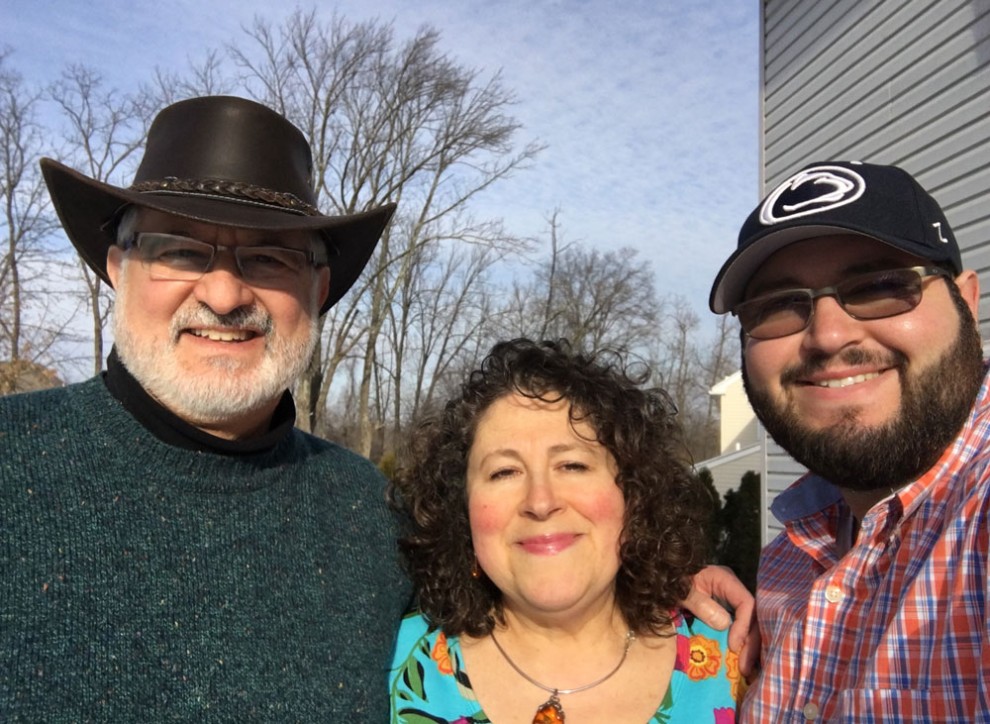 Five years ago, a miracle happened in Philadelphia on the last night of Chanukah. Brian Zionts-Bernstein still carries a dreidel in his pocket every day to remind him of the gift that he has received—a double lung transplant which saved his life.

“My miracle happened on Chanukah, and the dreidel I carry is an Israeli dreidel—it says a ‘Great Miracle Happened Here.’ That’s why I carry it as a reminder every day of the miracle that I received. I try never to forget to put it in my pocket,” said Zionts-Bernstein, noting that he purchased the dreidel in the gift shop of National Museum of American Jewish History in Philadelphia, so its inscription rings true for his situation.

Zionts-Bernstein, now 55, is from Philadelphia originally, but has lived in the Lehigh Valley for many years with his wife, Kym, a lifelong member of the Lehigh Valley Jewish community. It was on a hike with their son, Sam’s, Boy Scout troop that he first noticed he was having a hard time breathing. That day eventually led to a diagnosis of idiopathic pulmonary fibrosis, or IPF, a disease of the lungs.

Sam’s Bar Mitzvah was only a year away.

“What do we do?” asked Zionts-Bernstein, recalling how he and his wife weren’t sure how much to explain to their son as they prepared for this milestone. “Because this disease has many different paths it can take, but all of them, it’s terminal. There’s no cure.”

They ended up telling Sam just the bare minimum—that Zionts-Bernstein had issues with his lungs and that they were dealing with them.

The Bar Mitzvah came, the party was thrown, and the family even did a tour of Israel to celebrate. Zionts-Bernstein went on with life the best he could. He kept working as an IT specialist, volunteering with the Boy Scouts and traveling with his family. He was one of the lucky ones. His disease progressed slowly, but for many others, the decline can be much quicker. Even so, after several years of living with the disease, his lunchtime walks were traded for naps, and he started doing pulmonary rehabilitation to prepare him for his transplant and using oxygen. He worked up until the day of his transplant, with a 50-foot hose connecting him to an oxygen concentrator so he could move freely about his office.

“I pushed myself,” Zionts-Bernstein said of his rehab work, “because I knew every bit of that was going to help me in my recovery post-transplant. I didn’t let [needing more and more oxygen] discourage me.”

Finally, in December of 2014, Zionts-Bernstein received his miracle.

“I had just left work and was on my way to pulmonary rehab on this Tuesday afternoon, and my phone rang,” said Zionts-Bernstein. “And it said ‘no caller ID,’ so I chose not to answer it, not thinking it could be ‘the call.’”

Driving on the ramp to the interstate, Zionts-Bernstein checked his voicemail. The first words he heard were, “Brian, we have lungs for you.”

“I started crying, with joy and fear for myself, for Kym, for Sam, for my in-laws, and with sadness, too, for the donor and donor family.”

Zionts-Bernstein, who now regularly speaks at schools and hospitals in support of organ donation, doesn’t take the gift he received lightly.

“The donor family made a decision to honor their loved one’s choice to be a donor. To give the gift of life, and I happen to benefit from that, and I am so appreciative, we are all so appreciative,” said Zionts-Bernstein. “That donor is my hero, but all donors are heroes.”

It wasn’t an easy recovery for Zionts-Bernstein. His surgery went well, but complications arose which led him to spend two weeks in a sedated state at the hospital. Fearing he may has had a stroke, he was subjected to many CAT scans and MRIs. Finally, he was able to start physical therapy and build up his strength again.

This didn’t happen without a fair bit of vomiting first, however.

“My physical therapist in the ICU was a super guy, I had a great time with him,” recalled Zionts-Bernstein, “but one day after I had just finished throwing up, he came in and said, ‘Brian, finish up, we’re going for a walk.’ I gave him a look with daggers in my eyes.”

The PT did indeed get Zionts-Bernstein leaning on a high-rise walker, and held a basin in front of him while his wife followed behind with a chair just in case he needed to suddenly sit down.

“I walked 65 feet that day, but for me, it was a tremendous walk,” said Zionts-Bernstein.

The next day, he went 145 feet, and a month later, that same PT sent a video to the hospital staff on the ICU to show how much progress Zionts-Bernstein was making in his new stepdown unit, where the nurses were ordering him to slow down.

That was five years ago. Now, Zionts-Bernstein is doing things like competing in the Transplant Games of America, an annual multi-sport festival event where donation recipients, living donors and donor families compete to help promote the need for organ, eye and tissue donation, and flying in airplanes—no oxygen needed.

And, of course, he is actively promoting organ donation with the Gift of Life Donor Program.

“Being a speaker for them is very cathartic for me,” Zionts-Bernstein explained. “I feel like I’ve been given this gift and I’m paying it forward. I want people to be able to make an educated decision and hope that people will choose to check the box and choose to register and, most importantly, share that with their loved ones so they know your wishes so that they can honor it. Only 47 percent of people in Pennsylvania are registered as organ donors. We need more people to be registered.”