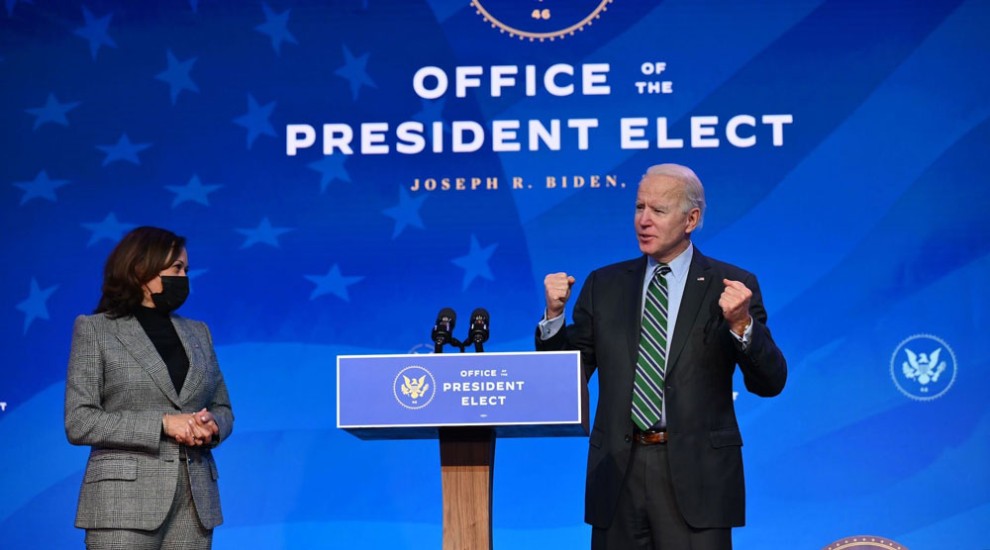 When Joe Biden and Kamala Harris took office as U.S. president and vice president on Jan. 20, they made history in all sorts of ways — including Jewish history.

Some of the historical firsts are obvious: Biden is the oldest person ever to occupy the White House, and Harris is the first woman or person of color or person of South Asian descent ever to serve as vice president.

Their Jewish bona fides are also notable:  Biden’s three children who survived into adulthood all married Jews, making him a grandfather to several Jewish grandchildren. (Biden’s first wife and infant daughter were killed in a car accident in 1972.)

Harris’ husband, Doug Emhoff, is Jewish, and the couple celebrate Jewish holidays together. Their 2014 wedding featured the traditional Jewish breaking of the glass, and Emhoff’s two children from his first marriage refer to Harris as “Momala” — a mashup of Kamala and the Yiddishism “mamaleh.”

This past Chanukah, Harris and Emhoff posted a video on Twitter of the couple lighting the menorah.

“I love Chanukah because it really is about the light, and bringing light where there has been darkness,” Harris said, pronouncing Chanukah with the guttural “chet” sound – rather than the Americanized “hey.” “And it is a celebration of, always, tikkun olam, which is about fighting for justice and fighting for the dignity of all people, and it’s about rededication.”

The blended Jewish families that will lead the new U.S. administration are not an anomaly — they are emblematic of the story of American Jewry.

Most American Jews marry outside the faith – 58% according to the most recent national survey, conducted in 2013 by the Pew Research Center. However, rather than abandoning Judaism, these interfaith couples increasingly are raising their children as Jews, or celebrating Jewish traditions alongside those of other faiths. Some 45% of intermarried Jews are raising their children in the Jewish religion, according to Pew, up from 28% in 1990.

While half a century ago Jews who intermarried were looked upon as a loss for the Jewish community, today interfaith families are part and parcel of the American Jewish community. In the Reform movement, the largest U.S. Jewish religious denomination, rabbis officiate at interfaith weddings, many synagogues have non-Jews as members, and certain ritual roles during synagogue services are open to non-Jews.

The Reconstructionist movement, which is the smallest of America’s liberal Jewish denominations with about 100 affiliated synagogues, made history in 2015 when it dropped a ban against accepting intermarried students to the movement’s rabbinical school.

In the Conservative movement, more than one-quarter of all homes include a non-Jewish family member, according to the Pew survey. Even among many Orthodox Jews, it has become more common to take a welcoming approach toward interfaith couples in the hope that a non-Jewish spouse ultimately converts rather than to ostracize intermarried Jews.

By the same token, the prevailing attitudes of Americans generally toward Jews have warmed over time. In the 1950s and ’60s, large swaths of Americans disdained Jews in one way or another: In 1958, only 62% of Americans said they’d be willing to vote for a well-qualified Jewish political candidate, compared to 91% in 2015, and a 1964 survey found that 43% of Americans held Jews responsible for the death of Jesus, compared to 26% in 2004.

While 2019 saw a 40-year high in anti-Semitic incidents in the United States, it’s common for non-Jews with Jews in their families to express pride about their Jewish relatives. Biden, a Catholic, is one example.

“I’m the only Irish Catholic you know who had his dream met because his daughter married a Jewish surgeon,” Biden quipped about his Jewish son-in-law, Howard Krein, at a political event in Ohio in 2016.

“A ketubah was signed. The couple got married under a beautiful chuppah, made of natural branches with a cloth covering,” Forman, rabbi at a New Jersey congregation, Or Chadash, told the Forward. “The wedding ceremony started with the traditional baruch haba and included the priestly blessing and the sheva brachot. The groom stepped on a glass at the end.”

At the reception, Biden danced the hora.

Biden’s son Beau, who died of cancer in 2015, also married a Jew: Hallie Olivere, whose Jewish mother Biden had known since his own childhood. At a 2015 event in Delaware, Biden joked that he had had a crush on Olivere’s mother as a kid.

“I was the Catholic kid. She was the Jewish girl. I still tried. I didn’t get anywhere,” Biden said.

Biden’s second son, Hunter, recently married for the second time — this time to Melissa Cohen, a Jewish documentary filmmaker from South Africa. Within days of their meeting, Hunter Biden got a “Shalom” tattoo to match one that Cohen had. The couple had their first child, a son born in Los Angeles, last March. That brought the number of Biden grandchildren with a Jewish parent to three, adding to Beau and Hallie’s two children.

When Harris was sworn in as vice president, it marked the first time a Jew has lived in one of the top two official U.S. residences: the U.S. Naval Observatory, official home of the vice president.

There’s another American Jewish storyline that Harris and Emhoff embody: the interracial couple. A growing number of American Jews are marrying outside their race — including both whites and Jews of color, who comprise somewhere between 6% and 15% of American Jews.

Lior Zaltzman contributed to this report.