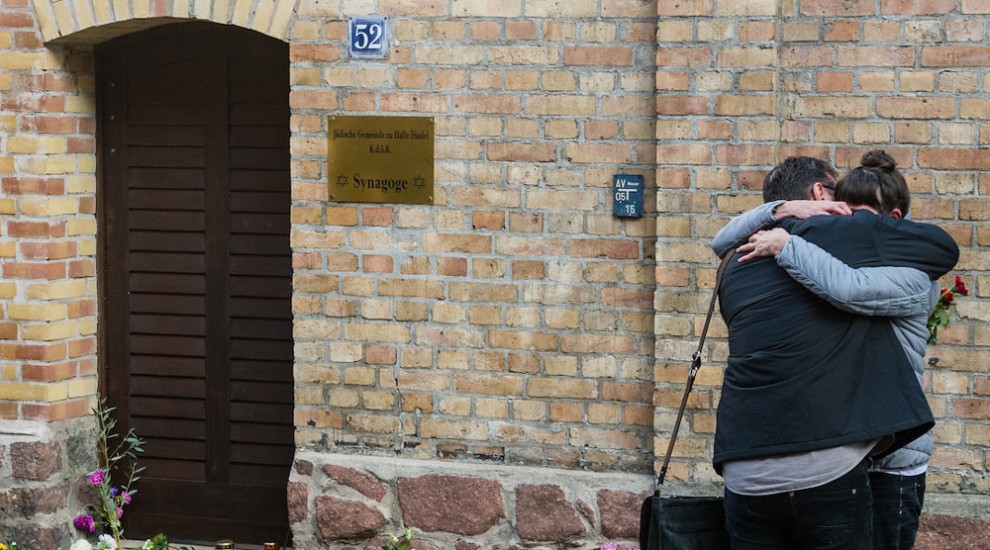 Just two days after a deadly anti-Semitic attack here, this city in eastern Germany slowly stirs to life.
On this morning, a woman walks a small dog along the sidewalk, crossing the street to avoid the police tape and masses of candles melting down. A mother passes by pushing a baby in a stroller.

Memorials now flank the doorway where a gunman tried to force his way inside a synagogue using explosives and homemade weaponry. Media crews and cameras still linger across the narrow street. A police van with two officers idles.

For a city with an aging populace often described as calm, where services like Uber are still largely unavailable, the attack comes as a shock.

“Everyone is quiet, turned into themselves. You can tell everyone is in deep mourning,” Nicole Wiedemann, a Halle resident, said while paying her respects before work. “We were shocked. We didn’t understand at first. That only came later, when we weren’t allowed to leave our buildings.”

The attack by a 27-year-old perpetrator, now in custody, left two dead and two injured — and a community in fear. While the synagogue’s hefty doors protected those inside, the pious Yom Kippur atmosphere for this synagogue in a city of some 240,000 residents, including 555 Jews, was shattered. Halle has now been put on the international map.

The voices of those who were behind the doors of the synagogue on Humboldtstrasse during the attack resonated loudest in the days following.

Karen Engel, who attended the Orthodox service with a visiting group from the Base Hillel center in Berlin, described an emotional gathering with singing and prayer that included Jews of many denominations.

A rabbinical candidate at the Conservative movement’s Zacharias Frankel College in Potsdam, Engel found herself thinking about “how wonderful it was that this was able to take place.”

“We know how difficult it is to have meaningful services in Germany in small communities,” said Engel, an American who has lived in Europe for 30 years. “And then in the middle of this singing we heard an explosion and then the shots.”

The perpetrator began his attack at approximately noon on Yom Kippur, the holiest day on the Jewish calendar. According to various media reports, there were 50 to 80 worshippers inside at the time, including about 10 Americans living in Germany and participating in the Base Hillel program sent to Halle to add to the small community’s Yom Kippur service.

The gunman, reportedly wearing combat gear and a head-mounted camera, was unable to shoot his way into the synagogue after trying multiple doors and hurling explosives. He then shot a non-Jewish female passer-by, as well as a non-Jewish customer at a nearby Turkish kebab shop while making his escape.

He was taken into police custody about an hour and a half later, according to Der Spiegel. The assailant was later identified as Stephen Balliet, 27, who lives in a town less than an hour from Halle.

Ezra Waxman, a 31-year-old postdoctoral student living in Berlin, was among the group of Americans who came to Halle and recalled the confusion as the group heard a series of loud sounds. Security personnel inside barricaded the doors from the inside. Eventually the worshippers gathered in a backroom and upstairs.

Despite the uncertainty, panic did not ensue, Waxman said.

“I have no logical explanation as to why I kept as calm as I did,” he said. “Maybe just my nature in some sense. I was impressed slash taken aback, there was no one that seemed to be immediately traumatized or freaking out or collapsing, none of that. People were just kind of waiting for instructions.”

For hours, the group remained inside the synagogue, even continuing with prayers. The police arrived and told them they would soon be evacuated. As the group waited it came time for mincha, the afternoon service. Many decided to go ahead with it.

“There was an added sense of spirituality or religious fervor amongst all of us,” Waxman recalled.
Eventually the congregation was evacuated to the local hospital for evaluation. They asked permission to continue their Yom Kippur service in the cafeteria.

“We had four or five machzorim [prayerbooks], and we were singing and chanting,” said Christina Feist, 29, who is studying at the Sorbonne in Paris and the University of Potsdam near Berlin. “It was intense and emotional.”

She added that one worshipper “had his shofar and took it with him when we were evacuated.”

Some hospital staff stopped to watch the service; some even filmed it.

“It was not a weird kind of ‘watching those crazy people,’” Feist said. “It was, ‘They are celebrating!’ … They were baffled, amazed and just interested.”

Hospital staff provided food for infants and the elderly, and the chief physician treated them all to beer after the service, Feist said.

Rabbi Elisha Portnoy, who practices in Dessau as well as Halle, said he was proud of his community’s bravery in reacting to the tragedy. He said the biggest surprise wasn’t the attack itself but the location: Such violence may have been expected in larger cities like Berlin or Munich, but not Halle.

Portnoy said he has felt an increase in hostility toward Jews in Germany, which is supported by data gathered by organizations like the Center for Research and Information on Anti-Semitism, or RIAS Berlin.

“It’s not in Halle, not in Dessau, it’s basically Germany in general,” Portnoy said of the rise in anti-Semitism. “But not in such small communities. So it was really a surprise. Nobody could imagine such a thing could happen to us.”

“I hope people will come to synagogue to pray … slowly but surely it will be better,” he added.

In the wake of the tragedy, politicians and Jewish leaders offered words both of condolence and warning.

“We need to do more to guarantee these types of attacks do not happen again, by combating radicalization, creating tougher law enforcement measures and putting more resources into educating towards tolerance,” Moshe Kantor, head of the European Jewish Congress, said in a statement from Brussels.

Ronald Lauder, head of the World Jewish Congress, said in a statement the same day that it had become unfortunately obvious that “all Jewish places of worship and Jewish communal sites need to have enhanced round-the-clocksecurity provided by state security services.”

A solidarity rally held Oct. 10 in nearby Leipzig was organized by the local German-Israel Society. And the European Union of Jewish Students held a rally the next morning in front of the German mission to the European Union.

Katharina von Schnurbein, the European Commission coordinator for combating anti-Semitism, told the crowd at the Jewish Students’ rally, “We often say anti-Semitism has no place in our society. Yet two days ago we saw once again that anti-Semitism murders in Europe.

“Today we will send out letters to all 28 member states reminding them to scale up security and better collaborate with Jewish communities.”

Others have shared frustrations about a lack of action.

Elio Adler, the founder of a Jewish nonpartisan group dubbed the Values Initiative, echoed von Shnurbein as well as other leaders in asking why there was no police protection for the synagogue on Yom Kippur.

“It is high time for Germany to decide how to deal with anti-Semitism and other forms of hatred,” he wrote in a news release. “The steps previously taken are obviously not enough.”

The suspect Balliet comes from a small community of 2,000 near Eisleben, an eastern German town whose population has fallen nearly 50 percent since the mid-1960s. The decline mirrors the same demographic collapse that much of East Germany suffered following unification in 1990.

Some observers suggest that economic stress coupled with the influx of more than a million refugees in Germany — many of them Muslims from war-torn countries since 2015 — have contributed to support for right-wing parties. In this society on edge, there has been a recent rise in anti-Semitic incidents.

The areas suffering population loss and economic stress have also proven to be strongholds for Germany’s anti-immigrant AfD party, some of whose representatives have belittled the Holocaust. Critics have warned that the AfD is close to neo-Nazi ideology.

Following the party’s election successes in September, Josef Schuster, president of the Central Council of Jews in Germany, said in an interview that the AfD is closely interwoven with right-wing extremism, inciting fears and promoting an anti-minority atmosphere.

Despite concerns about anti-Semitism among the many Muslims in Germany, the far right remains the greatest threat to Jews, he said at the time.

“We cannot simply go back to normal,” von Schnurbein said Friday morning. “The attack in Halle must be the wake-up call.”