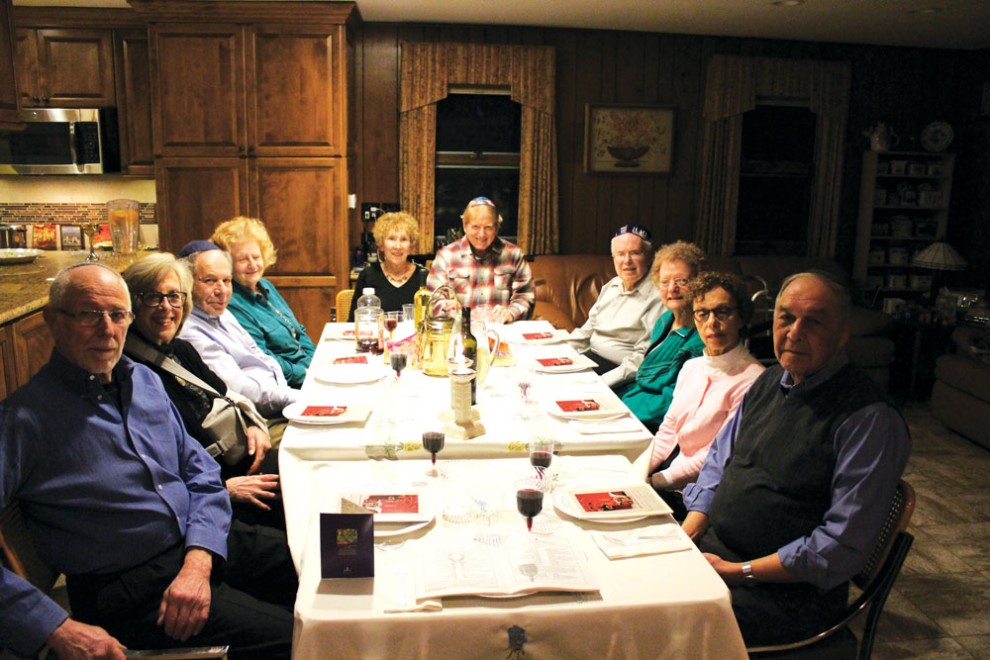 By Aaron Berger
Special to HAKOL

Carol and Lloyd Berrin, Jeanette and Eduardo Eichenwald, Susan and Arthur Hochhauser, Elaine and Paul Langer, and Barbara and Arthur Weinrach have been having dinner together for the past 47 years. These regular dinners have become an important tradition to all of them.

“Our dinner club first met each other in the early 1970s at the ‘Young Couples Club,’ a program at Sons of Israel to recruit congregation members under the age of 30,” Arthur Weinrach said. “We were all new to Allentown and became friends.”

Arthur and his wife Barbara have been in Allentown since 1973. Allentown did not have a kosher restaurant anywhere nearby at that time, so the Young Couples Club members that kept kashrut started hosting dinners on a rotating basis, thus, the origin of the “Dinner Club.”

Dinner format has remained relatively the same since it started. The host provides entrees and beverages, and the other guests are assigned appetizers, side dishes and desserts. When they gather for Shabbat dinners, though, the host prepares the entire meal.

Dinners are usually the third Saturday every other month, considering the Jewish holidays. Member Elaine Langer prepares and sends a spreadsheet to the club with proposed dinner dates for the year. She is the club’s organizer-in-chief and has assured their continuity.

“A number of years ago, one of our members was caring for a parent, but suggested we still have dinner at her home on New Year’s Eve. Since then, we have been celebrating New Year’s Eve together. We have truly become brothers and sisters,” Arthur said.

“Members of the group have also traveled the world together (Israel, Italy, Peru and Ecuador, for instance) and attended family events such as weddings and bar and bat mitzvahs,” Barbara and Arthur said.

“My husband, Ed, and I joined the dinner club 20 years ago,” Beth Posner, a newer member, said. They moved to the Lehigh Valley from New Jersey in the summer of 1970. “After our original dinner club disbanded, I called Jeanette Eichenwald, whom I was close with, asking if we could join them for New Year’s Eve. Jeanette graciously agreed, and the group invited us to be part of their dinner club.”

“We never run out of things to talk about,” Beth and Ed said. “We have a lot in common, including our love for Israel. We would not trade these friendships and experiences together for anything.”

Elaine and Paul Langer are from Brooklyn, New York, and have been in Allentown since 1964. Elaine got the idea of forming a kosher dinner club and proposed it to Carol, Jeanette and Susan. They were all enthusiastic about the idea, and Elaine started to draw up assignments.

“We always have great chemistry together,” Elaine said.  “The experience that stands out from all of our dinners is how much we laugh together. But there are two hysterical moments that I will never forget.”

“The first one occurred when we used to have a member bring a meal from a different country,” Elaine said. “The Eichenwalds brought a fruit dessert with some type of sauce. The fruit they brought looked okay, but when Jeanette poured the sauce, it looked like rubber cement. We could not stop laughing.”

“The second incident involved a lemon cake brought by the Weinrachs,” Elaine said. “Prior to dessert, Barbara expressed her concerns about the cake not tasting good. I asked her how bad could it be, then took a bite and it was awful. I spit it out and everyone started cracking up. Others then smelled the cake or took a tiny taste and agreed the cake was totally inedible. Barbara then told us that the lemon extracts she used did not smell right, and that she had used regular flour instead of cake flour. This cake has been the only food ever consigned to the garbage disposal.”

“Our lifestyles are extremely similar, and we are all connected to the rhythm of Jewish life,” Jeanette said. “The over-riding experience of sharing our lives together is what stands out. We are always there for each other, and have shared our joys and sorrows throughout these many years. Most of our dinner club evenings involve laughing, reminiscing, storytelling and definitely eating.”

Susan and Arthur Hochhauser say great friendships have come from the dinner club. “We are family. It is also nice that we are able to share kosher cooking choices with each other. We are fortunate to have met a group with similar interests.”

For those looking to create their own successful group, here are a few suggestions from the dinner club. “First and foremost, couples should not be setting out to create a tradition,” Elaine said. “They just have to really enjoy being with each other and want it to continue.”

"And set a schedule well in advance,” Barbara and Arthur Weinrach said. “Each member is sent a draft calendar for the year, and it is edited as necessary. And communication is key: if a member has another commitment, they circulate a message to the club requesting a date change. And if everyone else agrees, the date is changed, and, if not, the scheduled dinner is held anyway."