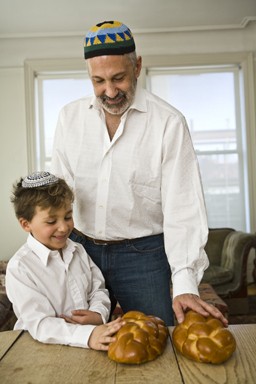 I recently attended a class regarding food and its influence on civilizations. The topic of the day was ancient Judaea, and as the lecturer was talking about the laws of kashrut, I was struck by how much we, Jews, are obsessed by food.

Think about it: Not only does the Torah give us the laws of kashrut and regulate what we as Jews are allowed to eat on a daily basis, but it is also full of food references. Adam and Eve are expelled from the Garden of Eden because of a forbidden fruit. Cain killed his brother Abel because G-d favored Abel’s food offering (fat from an animal) over his (fruits of the soil). Isaac favored Esau “because he did eat of his venison” (Genesis 25:28). Jacob offered to give Esau a bowl of lentil stew in exchange for his birthright and Esau agreed. Jacob and his sons travelled to Egypt to buy grains because of a great famine in Canaan. While in prison, Joseph explained the dreams of Pharaoh’s cup bearer and baker. Later he saved Egypt from famine by solving Pharaoh’s dream and having him store vast quantities of grain.  The story of Passover explains how the Hebrews had to leave Egypt in a hurry, and had to take with them bread that was still unleavened. In the desert, they were fed manna for 40 years. Even our promised land is referred as “the land of milk and honey.” I could go on and on because food is just everywhere in the Torah.

But it goes deeper than that. Have you noticed how every holiday has a food theme? Passover, of course, has its own food rules. On the seder plate, all our symbols regarding our sojourn in Egypt as slaves are food: bitter herbs, shank, eggs. Even the mortar Pharaoh made the Hebrews make has become charoset -- and delicious.

With Chanukah, there are fried foods, Shavuot features dairy products, and we eat sweet food for Rosh Hashanah. For Purim we offer food baskets to our friends and family. Even Yom Kippur is about food -- or should I say the lack of -- the focus of it being the fasting, preceded and followed by a very nice meal. And before anyone frowns and reminds me that Yom Kippur is about forgiveness, I would reply that although that’s true in theory, let’s face it: a lot of us during that day think mostly about … food.

What about Shabbat? Our blessings are on bread and wine. We bake challah, a kind of bread invented specifically for the occasion. After the weekly service at the synagogue, a nice kiddush is offered for all the congregants to share. On top of that, we have to have three nice meals before Shabbat is over. I think you get the idea.

That’s not all. We Jews are so obsessed by food that we managed to bring food to every occasion of our lives. All our joys and pains are accompanied with food. A birth, a bris, a bar mitzvah, a wedding – all are occasions for us to share food, and on a level that no other religion can match. Even a death: Not only do friends and family do bring food to people in mourning, some types of food, like hard boiled eggs, are symbolic to mourning.

There is a special relationship between all human beings and food. What makes the relationship special to the Jews is that no other religion or country makes it an obligation, a religious duty. While the Italians can stay Italian even without eating Italian food, there is no way people can practice Judaism religiously or culturally without food. You can’t celebrate Passover without eating matzah, nor can you observe Yom Kippur properly without fasting.  Every celebration of every Jewish holiday is through a meal. The famous joke -- “They tried to kill us, we won, now let’s eat” -- is really not far from the truth.

Are the Jewish people obsessed by food because it is central to Judaism or is Judaism obsessed with food because the Jews look for any occasion to share food? I think both. Contrary to many religions that associate spirituality as a state of mind that rises above the preoccupations of everyday life, Judaism seeks to raise the ordinary activities of everyday life to a higher level. And what could be more ordinary than food? So when we discover so many references to food in our sacred texts we learn that even so mundane a thing as eating can be made holy. Yet, Judaism never asked  us to make the food so delicious! It is our forefathers and mothers who made us appreciate those holiday meals and recipes, nurturing our love for food … and Judaism.

Alice Level writes about food and family. Her recipes and stories can be found at www.traditionsandrecipes.com.