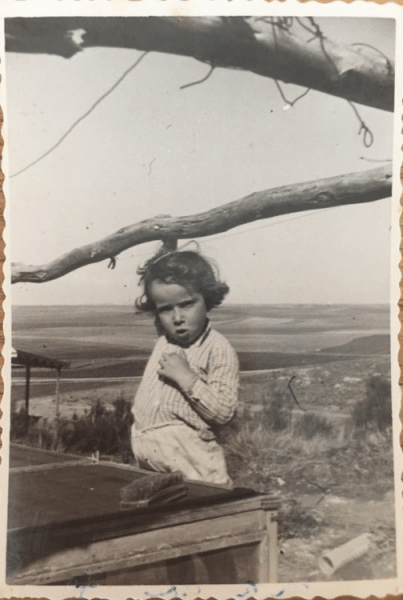 By Rina Keren
Special to HAKOL

Editor’s Note: The following is a story from grandmother Rina Keren from Kfar Menachem in the Yoav region of Israel, telling her story as a child during the War of Independence in 1948 to her grandson Ron. Keren told her story as part of a series where grandparents share their childhood experiences with their grandchildren in honor of Israel’s 70th birthday.

It was the time before the War of Independence broke. Kibbutz Kfar Menachem was under siege; no one came or left without military escort. Kfar Menachem was surrounded by seven Arab villages. Before the war, we had good relationships with the people of those villages, but when the war began, Kfar Menachem, like other communities in the area, began to protect the kibbutz, building trenches, bunkers and sand-bag barricades. The few weapons that we had were distributed among the kibbutz members.

As a child, I could feel the tension in the air. I had many concerns and fears. I didn’t completely understand what was happening and the real meaning of war.

When the war began to come closer to our kibbutz, there were talks with the army until in the end it was decided to evacuate all the children to the Hadar Moshava in the area of Hod Hasharon. We began to pack our belongings in boxes. Every child packed their own clothes. I remember the silence around, derived from the fear of the unknown.

The evacuation day was scheduled for May 19, 1948. At noon, three armed vehicles arrived, and when night fell, all the children, accompanied by our teachers, climbed on these vehicles. Of course most kids left without their parents, and older siblings took care of the little ones. I was lucky that my mother did come with us, along with my baby brother Yehuda. I remember that during the ride, we were asked to keep quiet. Everyone withdrew into oneself. One of my friends later told me that she was so scared during the ride, that she held her brother near the window, so if there was gunfire, he would be a human shield for her.

We arrived to the safe haven of the Hadar Moshava, surrounded by citrus orchids. The locals greeted us with open arms. We settled in a few houses in the community. From that time I remember that we were outside hiking and playing. Our preschool building was located in an old packing factory and jackals were roaming around the building. I remember our teacher shouting to try and scare them away. During the nights, the jackals were howling, and it was hard for me to sleep.

During our time in Hadar, my baby brother Yehuda was terribly sick with meningitis and my mother was with him in the hospital for the whole time, and I was left on my own with the rest of the children in Hadar. Gladly, he recovered and he and my mom came back to Hadar.

When the war ended, we returned to Kfar Menachen. I remember the date – it was October 29, 1948. We were very happy to return, and all the adults were overjoyed to see the children again. The kibbutz was still barricaded, but things began to go back to normal. We put all our clothes and games back to their place, and returned to our daily routines.