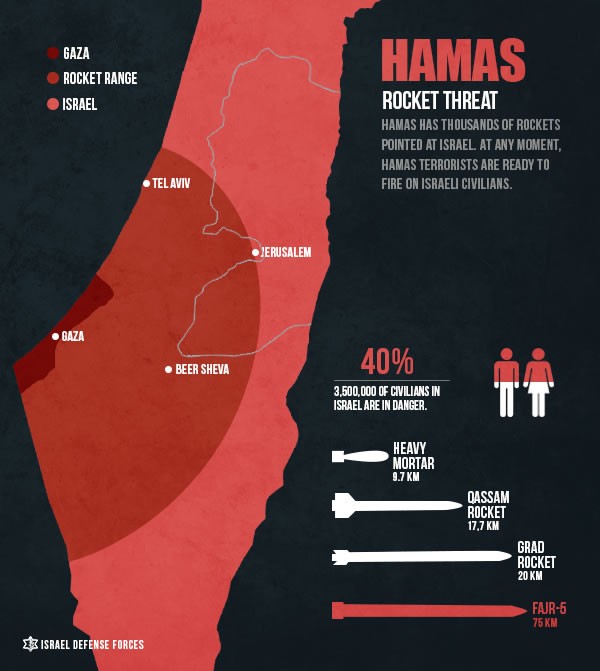 For over a month Israel has been barraged with rockets from the Hamas-controlled Gaza Strip. The rockets preceded the kidnappings of the three Israeli teens and continued throughout their captivity; even on the day of the funeral over 18 rockets were launched into Israel. In response to this terror, Israel launched targeted retaliatory strikes into the Gaza Strip. The Hamas rockets have continued, with greater intensity and range. Following the fourth Israeli Security Cabinet meeting in less than a week, Israel decided to intensify defensive efforts against Hamas and restore stability to the country's south. The Jewish Federation of the Lehigh Valley is working closely with its representatives in Israel and partners overseas to keep you informed of the situation as it unfolds.

Israel's response to the intense rocket fire from Gaza over the past month, which has been dubbed "Operation Protective Edge" ("Tzuk Eitan" in Hebrew), launched last night. Since Monday morning, over 160 rockets have been fired at Israel. Hamas terrorists in Gaza have claimed responsibility for most of the attacks which are activating "Code Red" sirens deep into central Israel.

More than 300 rockets have been fired into Israel from Gaza since June 12, the day on which the three Israeli teenagers were abducted and murdered. (Over 460 rockets have been fired on Israel since the beginning of the year.) A nursery school was hit (July 3), two factories in Sderot were razed (June 28) and a number of homes and cars have been damaged by other rockets striking open areas. In addition, a terrorist armed with a grenade tried to enter an Israeli village (June 22) and there have been several cross-border attacks. Earlier this morning, the IDF intercepted five armed Palestinians who entered Israel along the coast south of Ashkelon.

The projectiles being fired at Israel include a combination of military-grade Grad missiles, locally-made "Kassam" rockets and mortars. In the past few hours rockets have landed in the outskirts of Jerusalem and Tel Aviv.

Israel continues to deploy the Iron Dome defense system, which is reported to have an 85% success rate against incoming rockets.

In the past 24 hours, our sister region in Yoav was hit by a rocket that caused damage to a hen house at the outskirts of the Kibbutz in Gal'on. Yoav has been under several "Tzeva Adom" (Code Red) sirens. Camps and other activities in the Yoav region have been canceled until further notice and the kids are all home. Many kibbutzim have opened their public shelters and activities have been organized inside the shelters to keep the kids entertained. Most homes in the region are now equipped with a "safe room."

The preventative measures in place are helping mitigate the situation, and disconcerting as the sound of sirens wailing can be, Israelis have been following the instructions of the military and civilian authorities, rushing to protected rooms and safe areas whenever needed.

These measures, together with the deployment of the highly effective Iron Dome defense system, have kept physical injuries to a minimum (primarily shrapnel wounds and shock), even as psychological and social support services are seeing a big spike in calls to help lines and other requests for assistance. In future updates, we will provide more information as it becomes available.

School vacation started last week. Yet in some locations, children are returning to schools with protected space to which camp programs and other activities have been relocated. The situation for preschoolers is more complicated, as few daycare centers have sheltered space and facilities between 7 and 40 kilometers from Gaza have been closed under orders from the Home Front Command.

Needless to say, all citizens have been instructed to remain close to a shelter at all times. This means intercity traffic is very light and is having a significant impact on local business.

The Israel Air Force struck over 100 targets across the Gaza Strip, including rocket launchers, a weapon storage facility, training bases, terror tunnels and other key objectives. Some 1,500 IDF reservists were called up for duty yesterday, with breaking news of a further draft of some 40,000 now approved. Katie McCants, a Lehigh Valley native who recently spoke about her experiences as a "lone soldier" at a Women's Division Lunch & Learn, is among those who were called.

Many Israelis across the country, including those living outside the immediate range of the rockets, and Israel supporters abroad have downloaded the 'tzeva adom' phone app, which alerts users when a rocket is being fired at Israel. Supporters of Israel are being encouraged to download the app to raise awareness. Social media reports are trending under #israelunderfire and #protectiveedge.

In the past week as tensions have escalated, our partners at The Jewish Agency and the American Jewish Joint Distribution Committee have been mobilizing and are already swinging into action. Thanks to core unrestricted funding and hard-earned experience from past emergencies, early assistance efforts are now underway. Below is information detailing some of that vital work. We will be providing additional updates in the days ahead.

The Jewish Agency is working with the National Insurance Authority and local municipalities via the SOS Fund to help meet urgent needs of three families from Sderot whose houses took direct hits. They have been evacuated to hotels and each family has been granted $1,000 to buy basic supplies, medicines, etc. Travel assistance is being provided to those who choose to temporarily relocate with family or friends in other parts of the country.

Staff from The Jewish Agency is working together with Amigour - Israel's leading sheltered housing company - to provide guidance and emotional support for elderly residents living in facilities in areas under fire. They are also assisting new immigrants living in absorption centers in dealing with the current crisis.

JDC approved a special grant yesterday to fund an emergency coordinator position at the Center for Independent Living in Beer Sheva. This facility serves a large population of young adults with significant disabilities living in the community. They face unique challenges in coping with emergency guidelines, in particular the need to move quickly to safe space.

The JDC Israel staff is working with Centers for Young Adults across southern Israel as they switch into emergency mode as they already have in Sderot. Where protected space is available, plans are being developed to welcome young adults as well as children and families, should the emergency situation continue.

The U.S. condemns the rocket fire toward Israel. "We strongly condemn the continuing rocket fire inside of Israel and the deliberate targeting of civilians by terrorist organizations in Gaza," White House spokesman Josh Earnest said at a news briefing today. "No country can accept rocket fire aimed at civilians and we support Israel's right to defend itself against these vicious attacks."