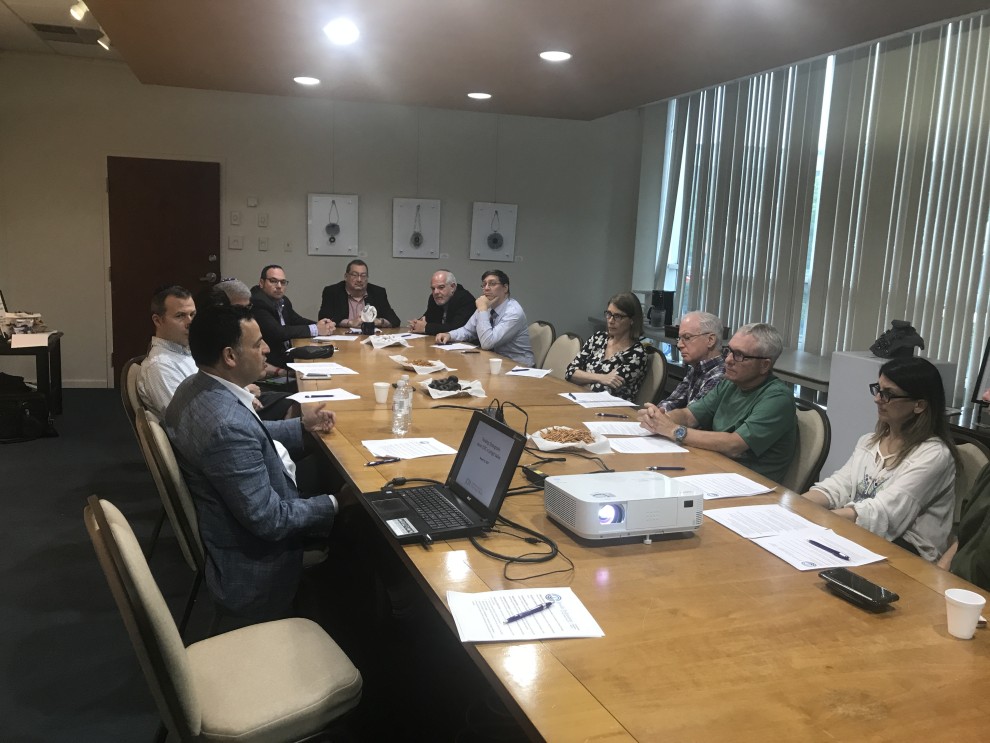 Editor’s Note: The following is an interview with David Bernstein, the president and CEO of the Jewish Council for Public Affairs. Bernstein met with the Jewish Federation of the Lehigh Valley’s Community Relations Council (CRC) on Aug. 14 to offer examples of advocacy from other CRCs nationwide and help our local CRC come up with advocacy goals and learn effective ways to take action.

Can you please give a brief overview of what you talked about at the event?

One of the things that the JCPA does is aids JCRCs [Jewish CRCs, a name used in some cities] to become the most effective advocates and spokespeople in their communities, and we look at what other JCRCs are doing around the country, and we try to identify the best practices and the like ... So, I [talked] a little bit about what other JCRCs are doing, the general directions of the community relations network and how a JCRC might grapple with some of the strategic challenges in the local community.

What are some of the challenges facing Jews today?

I think that there are a number of trends, or megatrends, if you will, that govern what kind of work we do.
One is that Jews are becoming a smaller and smaller percentage of a larger and diversifying American society. By 2040, America will be majority nonwhite, and we will be living in – if trends don’t change, and we have no reason to believe that they will – suburbs of cities, far removed from any of these ethnic communities. How are we going to navigate the complicated ideological, political and demographic waters in this changing America? That requires effective community relations.

Two, we’re facing a very polarized political reality. The right is becoming righter, the left is becoming lefter, you see the emergence of an alt-right which we saw in sickening display in Charlottesville, we also are seeing some disturbing trends in the left where people are too quick to conflate issues like Israel with oppressive regimes, and so forth. We are facing a more ideological, polarized reality that requires us to be more effective advocates.

Third is, we’re facing delegitimization of Israel. Around the country, we’re all trying to best advance a clear, thoughtful, realistic and nuanced understanding of Israel and make sure that the American left does not go in the direction of the European left on Israel, and that’s a tall order.

Fourth, America, like much of the western world, is going through a profoundly challenging moment in our history. Computers and robots are taking over what humans used to do, and that is rendering many people unemployable. Not just unemployed, but unemployable, because machines are able to do their work. That causes tremendous disaffection among large swaths of society, and that’s playing out in the political system. There’s a long-term fear that just as we faced when America and the rest of the western world went from an agricultural economy to an industrial economy, that we will also face that kind of excruciating transition that causes wars and political instability. I’m afraid that’s what we’re going through, and that’s going to cause all kinds of issues for us in the Jewish community.

With all these issues out there, how does the JCPA help determine the priorities for communities like the Lehigh Valley?

You start to look at the local demographics. Who are the power centers in the community? It’s not just ethnic or religious, it can be civic leaders or a powerful rotary club, and then you have to say: who do we get to know? Who are the most powerful forces in this community, how do we get to know them, and how do we integrate them into everything that we do as a community? That’s how we can take a strategic look at a particular community.

When you’ve determined priorities for a community, how do you go about helping that community figure out how to be an advocate with these issues?

The first thing you want to do is get clear on what you’re trying to do, and if you’re not clear, it becomes a sort of hodgepodge of different activities and programs that don’t add up to the kind of public profile you’re looking for.

One of the things that we ask people is: what are you not going to do? We saw this in Hillels. Hillels, for many years, did programs where they’d invite students, and whoever came came. Many Hillels started to change that paradigm. They started to ask themselves how to engage the most students, and the program might be one way, but there may be others. Maybe it’s a coffee outside the building, and so they began to rethink how they did their work. I think we need to do the same. It’s not necessarily about what programs we do to entertain members of our community, but how are we going to reach the people we’re trying to reach in the best, most effective way possible?

Do you have any examples of how the JPCA has helped communities dealing with some of the recent issues, like the Kotel conflict?

We’re providing talking points and positions and so forth. I will say, it can be very challenging, because in addition to representing the Jewish community relations movement, we are an umbrella of 16 national organizations, which includes the four religious denominations, including Orthodox, conservative, reform, and Reconstructionist. When we started to talk about the Kotel issue, part of the issue was our internal conversation with the various streams of Jewish life.

For us, it’s challenging. Some JCRCs and Federations don’t operate under that constraint, so they don’t need to reach an understanding with the Orthodox Union and the Union of Reform Judaism, whereas we do. But, we are constantly advising individual JCRCs in the way that they can best handle challenging issues in their community, be it an individual anti-Semitic act, to trying to get to know a community that they haven’t gotten to know, to what do they say about the elections? We’re trying to help them along just as we’re trying to figure these things out for ourselves.

But we do this from a unique vantage point, because I know what many others are doing, too. That’s the expertise I can bring – I know what’s happening in Boston, in York, Pennsylvania, in San Francisco, in Hartford, Connecticut. That doesn’t mean it’ll perfectly apply to the Lehigh Valley, but it may, and because I’m hearing it from all these different people, I’m getting a sense of the range of possibilities.

Why should we, as Jews, be working to advocate for these issues?

There are a couple of good reasons. One is because we’re citizens in addition to Jews, and we care about issues around us. We know that a society that’s tolerant and pluralistic is a society in which Jews are more likely to be secure and thrive.

Sometimes, the job of the umbrella is to find consensus. Consensus does not mean unanimity, it means that there’s a critical mass of people who we can represent a collective voice. That necessarily means, however, that not everybody will be happy with that consensus, because they didn’t fall in the area of consensus. So, we do our best, through a democratic process, to try to ascertain where that baseline is, and sometimes we’re not able to reach it. There are issues that are just too challenging, where we cannot honestly say that we’re representing a consensus, so we stay out of those issues.

At the end of the day, we can often say that we’ve had extensive consultations, we know where the various groups are coming from, and a critical mass of stakeholders believe that we should be saying X or doing X. But, you know, it’s a challenge. Sometimes, the wiser thing may be to say nothing, because we’re worried about profoundly alienating one segment of the community. There is a value in and of itself in unity, and sometimes, that means not fighting certain fights.

What do you think is the most critical issue affecting the majority of Jewish communities in the next election cycle?

I think we’re all being affected, in ways that we can’t even understand, by the polarized political culture. It’s a culture that’s amplified in social media, created in social media. It’s one that’s a product of a gerrymandered system of elections in which we draw in districts in order to maximize partisan feelings, and I think people can create their own realities, they can develop connections with their own tribe and ignore what everyone else is saying, and so the sense of the common good is diminished.

That is a security risk for the Jewish community. It brings out the extremes in society, and when you couple with that some of the economic transitions, I think we could be in for a very challenging time.

I contrast that with when I came into the field in the early 1990s, when things seemed pretty good for the Jews externally. We had our internal problems, we had a Jewish continuity crisis, but anti-Semitism was at an all-time low, Soviet Jewry had been successfully released from captivity, we thought we were on the throes of a Middle East peace, there were a lot of trend lines and we all thought that we didn’t have to worry about the external world. Lo and behold, 25 years later, we’re facing some very serious external challenges