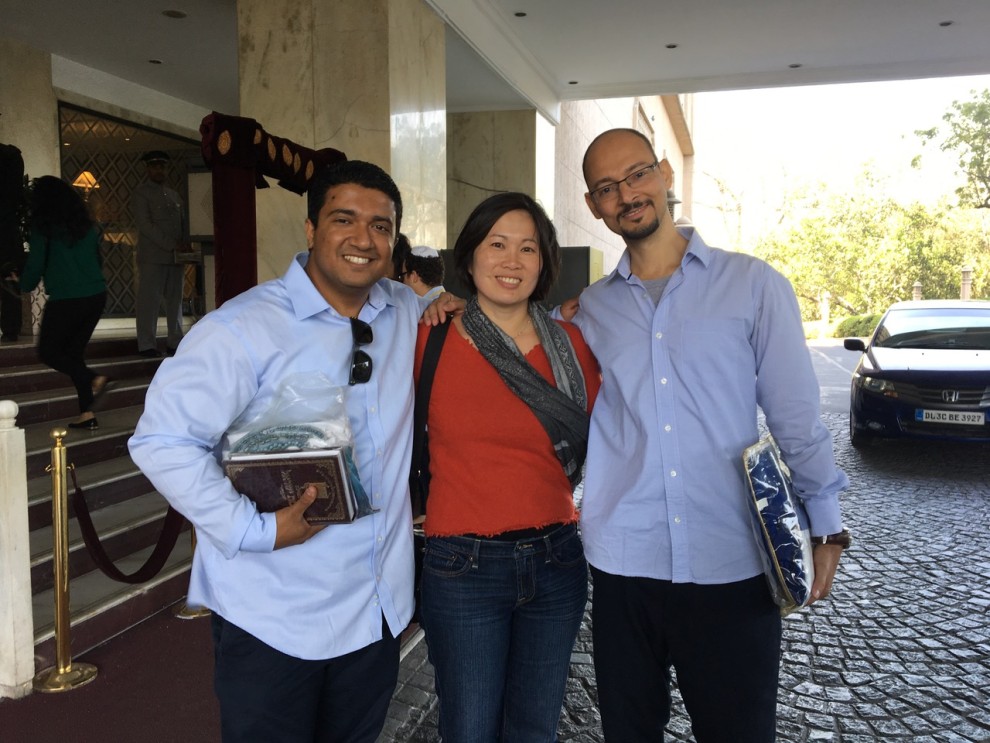 My recent study mission with the Jewish Federations of North America's National Young Leadership Cabinet to India was an opportunity to explore the strength and perseverance of a special group of people who fought hard to maintain their Judaism despite terrible odds. It was also an opportunity to explore the importance of tzedakah, not only toward our own, but also to the stranger, as a constituent part of belonging to the Jewish people.

When I told people that I would be going on a mission to India, the most common question asked was, “Are there even Jews in India?” After spending a very meaningful 10 days in the country filled with 1.34 billion people, I can answer yes, there are definitely Jews in India. A minuscule slice of the population at about 4,500 strong, they take nothing about their Judaism for granted and fight every day for Judaism to not only survive, but thrive.

The largest group is the Bene Israel Jews, a group believed to be descendants of one of the lost tribes of Israel. I had the privilege to board a catamaran and go on a pilgrimage from the Gateway to India in Mumbai, through the Arabian Sea and to the port of Mandawa where I took a tuk-tuk ride through the city to stand on Navagaon Beach, the site where this group shipwrecked over 2,000 years ago (between 175-165 BCE) while fleeing Roman rule in Judea. Only 14 people were believed to have survived. They lost their books in the shipwreck and over time, Hebrew. However, they continued to recite the Shema, performed circumcisions and observed Shabbat and Kashrut. In the 18th century, David Rahabi (some believe it might have been Maimonides’ brother David, which would date this phenomenon to the 12th century) came from Cochin to visit and after concluding that they were Jews, he taught them about normative Judaism. And in 1964, the Israeli Chief Rabbinate accepted the Bene Israel community as Jews and DNA testing in 2002 confirmed that they are indeed descendants of the Kohanim.

What is so amazing about this group is that despite being such a small minority and cut off from the rest of the Jewish world for nearly 2,000 years, the Bene Israel Jews were able to sustain their Jewish way of life simply through the ritual of reciting the Shema and their ongoing commitment to Jewish values. I was overwhelmed with such emotion while participating in a Bene Israel-led Shabbat service at Judah Hyam Hall, a synagogue in Delhi, when I saw the pure joy on the prayer leader’s face in knowing that there are Jews out there who care about him and his fellow Indian Jews, and that as we sang Hebrew songs both in familiar and unfamiliar melodies, we stood together as Jews, bound by our common heritage and strengthened by our disparate backgrounds.

In addition to spending time with the extraordinary Bene Israel Jews, I got to visit the Dharavi slums, one of the largest and most densely populated slums in the world and home to about one million people where in many cases families three generations deep live together and run their business in a space less than 1,000 square feet. Then, I got to see the impact that the dollars raised from Federation’s Annual Campaign have on helping to feed, educate and empower the children and women living in this and other slums in Mumbai and surrounding rural villages. We do this through our overseas partner, the Joint Distribution Committee in India, who allocate funds to programs that take care of the most vulnerable.

One such program is the Gabriel Project Mumbai. At a briefing, founding director Jacob Sztokman discussed with us the challenges of extreme urban poverty and the viscous cycles that occur when children are forced out of school to earn a living for their families. The Gabriel Project tries to break these cycles by providing intensive school programs coupled with hot meals.  These hot meals are prepared by women they employ and train thereby adding another way to help the disadvantaged. The Gabriel Project also partners with Sundara, an organization that helps reduce hygiene-related death and disease by repurposing used soap from hotels into new bars that are distributed during hygiene lessons in the slums. In addition, the Gabriel Project partners with Naya, a program that employs women from the slums to turn recycled waste paper into beautiful paper goods that are bought by businesses and local residents. Sundara and Naya provide low-tech employment to often illiterate women in the slums, which allows their children to remain in school.

These simple and low-cost programs are incredibly effective and the interconnectedness of these programs, supporting and feeding off of one another, is inspiring. In fact, NYLC members were so inspired that on the last day of the mission, we pledged to donate money to support the Gabriel Project Mumbai and various other JDC-supported youth initiatives including one that brings young adults or pioneers to India to work with slum children in schools as well as run Jewish programming and education at the local JCC. It is heartwarming knowing that our commitment in time, talent and treasure is able to provide for and help both Jews and, as the Torah instructs us, the stranger, halfway around the world.

In between meeting the Jews of India and doing my part in repairing the world, I got to experience the extraordinary landmarks that make India so culturally unique and a must-visit destination. Traveling on nine different modes of transportation (plane, bus, catamaran, tuk-tuk, elephant, jeep, rickshaw, train and electric van), I saw sights such as the surreal Taj Mahal, the magnificent Ambar Fort, the expansive Kanheri Caves, a colorful Bollywood set, the serene Gandhi Memorial and even dined at the City Palace as the Raj’s personal guest. These memorable experiences only highlighted all the important work that we do at Federation. I am honored that I was able to represent the Lehigh Valley on this year’s NYLC study mission. I return with many meaningful memories and stories to share and with renewed energy and dedication to close a successful campaign. Please answer the call and donate to JFLV’s annual campaign so that we can continue to build community and care for the most vulnerable locally, overseas and in Israel.