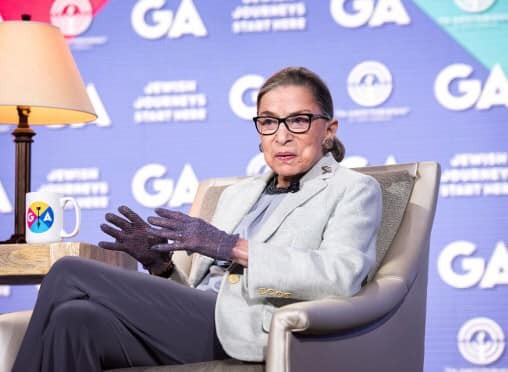 The Jewish Federation of the Lehigh Valley mourns the passing of Supreme Court Justice Ruth Bader Ginsburg, a champion of justice and equality in the United States, and a hero to the Jewish people around the world.

From humble beginnings as the child of an immigrant Jewish family in Flatbush, she became a lawyer and advocate who fought to change laws and policies that advanced the rights of men and women in our country. Her cases highlighted the inequality that still exists in our country, and made significant strides toward a more just society.

Justice Ginsburg became the second woman to serve on the Supreme Court, where her judicial decisions, and especially her dissents, made her a beloved figure and an icon to younger generations, who referred to her as Notorious RBG.

Through it all, Justice Ginsburg was a proud Jew. During her induction into the National Museum of American Jewish History, she said “The demand for justice runs through the entirety of Jewish tradition. I hope in all the years I have the good fortune to serve on the bench of the Supreme Court of the United States, I will have the strength and the courage to remain steadfast in the service of that demand.”

The day before she passed away, On Constitution Day, Justice Ginsburg received the 2020 Liberty Medal for her efforts to advance liberty and equality.

Justice Ginsburg's light shined hope to the nations. May her memory be a blessing and an inspiration for us all.