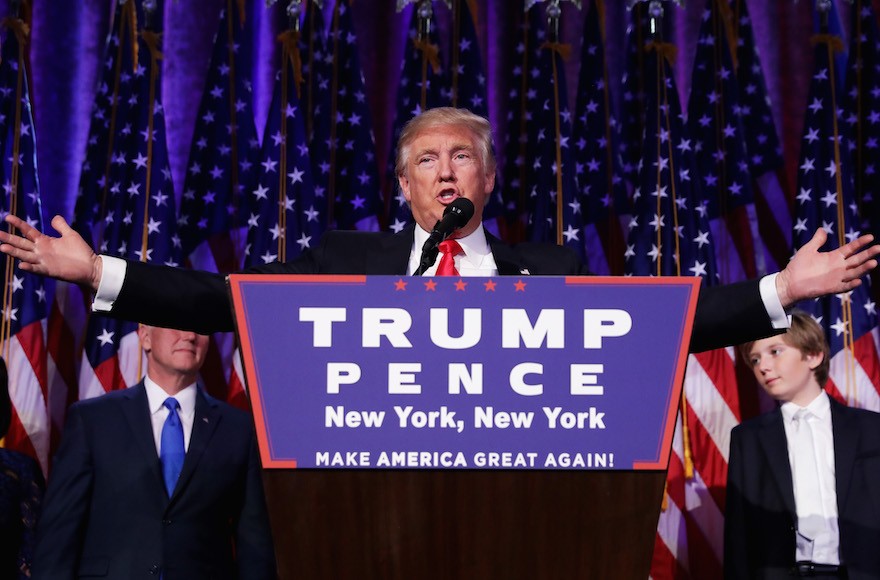 By Michelle Cohen
HAKOL Editor
On the afternoon following Election Day, the Jewish Council for Public Affairs and the Jewish Federations of North America hosted a conference call to discuss who Jewish voters supported, what the Jewish community can learn from this data and what can be expected from America’s 45th president.
The conference call began with brief remarks from Richard Sandler, the chair of JFNA, who stressed the election’s intensity over time, beginning with the primaries and leading all the way up to Election Day. He then passed the microphone to Andrew Silow-Carroll, editor-in-chief of the Jewish Telegraphic Agency, to discuss specifics.
Silow-Carroll began by describing the “major storylines” of the night, culminating in the fact that “the Democrats and the pollsters ignored the concerns of the white working class, and [Donald] Trump tapped into their concerns” by speaking what they were thinking. This includes Trump’s plan to be tough on immigration and break the established political patterns. He noted that in exit polls, the majority of voters who put economy as top priority voted for Hillary Clinton, while Trump voters put immigration at the top of their list. “This wasn’t an election about the economy, but about culture and values,” Silow-Carroll said.
As for why many of the pre-election polls predicted the result of the election incorrectly, Silow-Carroll speculated that they neglected to include the impact of white working class citizens. “The white working class voted as an ethnic group in traditional Democratic strongholds,” he said. “They saw common cause and a threat to their way of life, and Trump spoke in the way no Democrat would. The country is getting increasingly diverse and Democrats are getting behind that, but … even though they’ve gotten in touch with blacks, Hispanics, etc., the Democrats have lost touch with the white working class.”
And where was the Jewish vote among these other groups? According to exit polls, Hillary Clinton received 70 percent of the Jewish vote, 25 percent went to Trump, and the remaining votes went to third-party candidates Gary Johnson and Jill Stein. Previous Democratic candidates like Al Gore and John Kerry received more of the Jewish vote: 79 percent and 74 percent, respectively.
The call’s second speaker, Lynn Sweet, Washington, D.C., bureau chief at the Chicago Sun-Times, looked ahead to see what Jews and the country at large can expect in terms of bringing people together after a particularly polarizing election. “There is a path for him to do it,” she said of the president-elect. “Every important political figure … did the right thing and talked about how he won fair and square and we have a democratic constitutional orderly transition of power.” If he works on this transition, she said, he can work on bringing the country together.
Toward the end of the call, Silow-Carroll and Sweet took questions from callers, most of which were focused on what the Trump presidency will look like going forward. Silow-Carroll mentioned that an ideal step for Trump to take would be to “listen to some of the Jewish groups and anti-hate groups who need help [de-escalating] situations that have escalated over the last 18 months.”
Sweet added, “There’s a lot to unfold in the coming days, especially in the leadership that Trump might preside in trying to steer the conversation away from the incendiary topics that embolden the alt-right movement. The enormity of being president may influence the temper, tone and topics that Trump talks about, and we have a whole new set of voices to speak out about specific things not in a partisan context. A lot depends on Trump, and that means we just don’t know. We have a president-elect who’s one of the most unpredictable and improbable figures to win the presidency, so we will see, we just don’t know.”