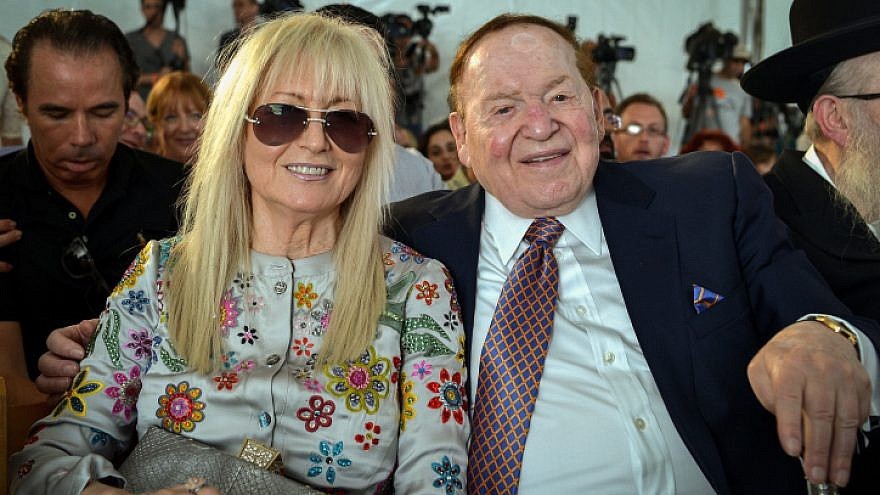 Following the news, the following Jewish and pro-Israel groups that have benefited from Adelson’s philanthropy expressed their condolences.

“We mourn the passing of Sheldon Adelson, who lived a remarkable life and was an extraordinary supporter of the U.S.-Israel relationship, and we extend our condolences to his wife Miriam and his entire family,” tweeted the American Israel Public Affairs Committee.

“We have lost one of the most consequential figures in American Jewish history: an American patriot, a dedicated defender of Israel, an extraordinary philanthropist, and a dear mentor and friend,” said Republican Jewish Coalition national chairman and former Sen. Norm Coleman (R-Minn.), and executive director Matt Brooks, in a statement.
In a statement, Isaac Herzog, chairman of the executive of the Jewish Agency for Israel, said, “I always told Sheldon that he’s the modern-day Moses Montefiore of our generation. Just as he who broke barriers and built Jerusalem, so did Adelson in Jewish education and connection to Israel.

“I had the honor of a close relationship with him for many years, and he was no doubt among the greatest leaders of the Jewish people throughout this generation. His generosity, openness, modesty and accessibility always stood out. Even when we had differences of opinion, I always loved him.”

In a tweet, the Zionist Organization of America and its national president Mort Klein said they “mourn the loss of a giant Zionist and humanitarian, Sheldon Adelson, Shalom Gedalia. He was a huge supporter of medical research, as well as pro-Israel efforts. He also fought anti-Semitism and promoted Holocaust remembrance.”

In a statement, Friends of the Israel Defense Forces said, “Today, we lost a beloved friend, dear partner and true Zionist. His generous and unending support for the soldiers of Israel, and his commitment to the strength of the Jewish State and its people, have touched the lives of people all around the world and will live on in our hearts forever.”

“Sheldon Adelson was one of the world’s leading entrepreneurs and business leaders,” said the Israeli-American Council in a statement. “Together with his wife, Dr. Miriam Adelson, he was the greatest Jewish-world philanthropist of our time. He touched countless lives with his generosity, devotion and passion for Jewish causes and connecting the younger generation to Israel.”

Taglit-Birthright, which received hundreds of millions of dollars from Adelson, called him “a man of vision, action, Zionism and inspiration.” Its employees had been “both honored and humbled to work alongside the Adelson family, which ultimately guarantees the future of the Jewish people,” noted the organization.

‘He will be missed’

“Sheldon lived the true American dream,” said former U.S. President Donald Trump in a statement released by the White House. “His ingenuity, genius and creativity earned him immense wealth, but his character and philanthropic generosity his great name. Sheldon was also a staunch supporter of our great ally the State of Israel.”

“He tirelessly advocated for the relocation of the United States embassy to Jerusalem, the recognition of Israeli sovereignty over the Golan Heights, and the pursuit of peace between Israel and its neighbors,” he continued. “Sheldon was true to his family, his country and all those that knew him. The world has lost a great man. He will be missed.”

Former U.S. Secretary of State Mike Pompeo said Adelson’s life “represents the best of the American dream,” and that “the world, Israel and the United States are safer because of his work.”

Former President George W. Bush called him an “American patriot, a generous benefactor of charitable causes and a strong supporter of Israel.”

In a statement, Israeli Prime Minister Benjamin Netanyahu said: “He was a wonderful friend to us personally and an incredible champion of the Jewish people, the Jewish state and the alliance between Israel and America.”

Israeli President Reuven Rivlin also expressed sorrow and condolences to the family, noting that Adelson was “a great American patriot who saw it as his mission and goal to strengthen the alliance between Israel and the U.S.”
Other leading Israeli officials also weighed in on the impact of Adelson.

Ambassador Danny Danon, Israel’s 17th Permanent Representative to the United Nations and chairman of the World Likud, said that Adelson was “a central figure in the Jewish world and helped strengthen Israel’s standing both in the U.S. and internationally. Adelson contributed greatly to many of Israel’s historic events, including the transfer of the U.S. embassy to Jerusalem.”

Naftali Bennett of the Yamina Party called him a “Jewish patriot,” while Opposition Leader Yair Lapid of Yesh Atid praised Adelson for his support for Israel that strengthened Jewish heritage” and that “will accompany us for many years to come.”