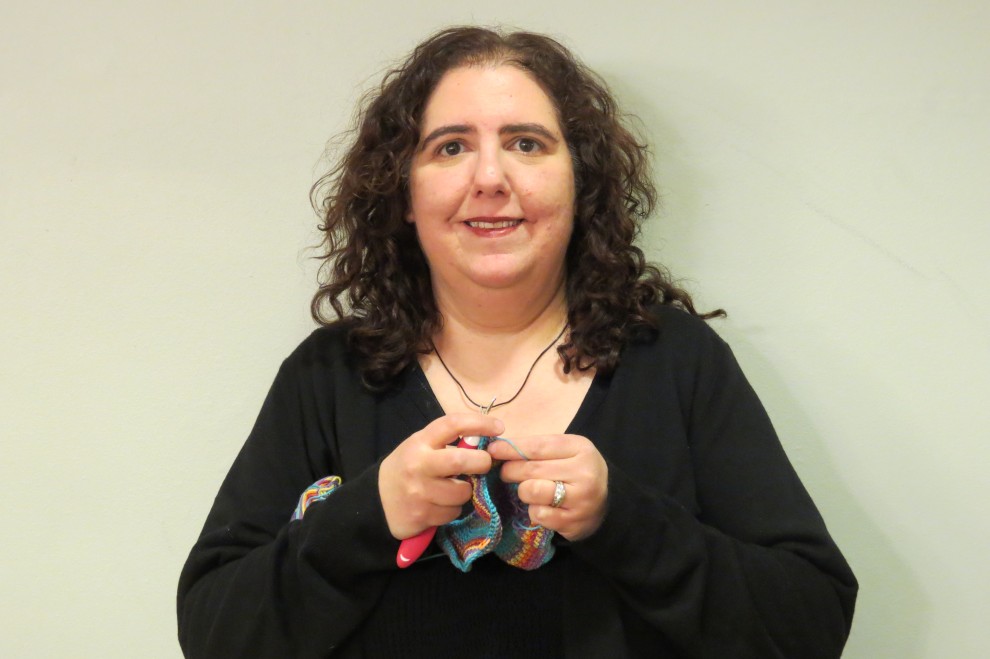 Jodi Eichler-Levine is an associate professor of religious studies and serves as the Berman Professor of Jewish Civilization at Lehigh University. She holds a Ph.D. in religion from Columbia University and a bachelor’s degree in Near Eastern and Judaic studies from Brandeis University. In the following interview, she speaks about her new research project, a book tentatively titled “Crafting Judaism: American Jewish Women and Creativity.”

Can you give me an overview of the research you’re doing?

The book is in progress, it’s a large project and I’m at the ‘gathering lots of research’ stage right now. The book is an exploration of how Jewish women sew, knit, crochet and also take part in other creative endeavors like creative writing or painting.

Why did you choose to write about this topic?

I want to write this because I feel like there’s a lot of material culture, a lot of stuff that women make that is a huge part of Jewish life that hasn’t really adequately been looked at by scholars. Jewish studies historically has privileged the study of Jewish texts, which is of course very important, but as we work on women’s history and sociology, there’s a lot to look at in terms of what women create.

Can you describe your research process?

I’m doing a lot of interviews, talking to people for hours about their work, and I’m also looking historically at the history of Jewish art and craft. I also take part in participant observation, which means learning how to do some of these activities myself. Mostly I’m trying to get a sense of what’s on the ground today in terms of how Jewish women are creating things and where that fits in their Jewish identity.

How did you first begin thinking of this idea?

There are two ways, and they both started when I was in graduate school. When I was at Columbia, I was writing my dissertation that would become my first book, about Jewish children’s literature and African-American children’s literature and their overlaps. At that same time, I became a knitter. I learned to knit in graduate school and it became sort of my form of therapy. I noticed two things at that point that gave me the idea. One was that there were a lot of books coming out about crafting and spirituality. I found a book on kabbalah and quilting, and there’s a book called “Zen and the Art of Knitting,” among others. There are a lot of crafters engaged in spiritual matters. I study all religions, although Judaism most of all. At the same time, in the books I was writing about, in children’s literature, I noticed that a lot of books that focused on memory also focused on textiles, on quilts, on shawls. I decided that rather than just looking at the representations of quilts, which I loved doing in one chapter of my dissertation research, I wanted to get out there and talk to people about their creations as well as look at the creations themselves.

How many people will you be speaking to?

I’m doing a national sample and I’m coming at it in many different ways. For example, I did one online survey that had a couple hundred respondents, I’m still analyzing that data. Then I’m doing face-to-face interviews. By the end of the book it’ll be several dozen, hopefully more. Right now I’ve talked to about six people in the northeast, and I’m going to California in the middle of April to interview people there. I’m studying the Pomegranate Guild of Judaic Needlework, which is one of the organizations that really focuses on this stuff, so I’m going to their convention in May. I’m trying to reach as many people as I can. I’ve also done some email and skype interviews.

What message are you hoping for readers to get from the book?

At this point, since I’m in the midst of the research, it’s a little soon to say that there’s a message to take away, but what I am hoping for is for people to really think deeply about the fact that religious practice, which I would understand very broadly, is embodied. It’s not just about theology or doing the right thing on a particular holiday, it’s also about all of that stuff that’s around us. Take the Passover seder, for example; you go to a seder and there might be a matzah cover that is handmade. In my family, it was embroidered by my great-aunt. You hold Kiddush cups, someone made that. Religious community isn’t just formed around formal ceremonies like bar and bat mitzvahs or Shabbat, although those are wonderful ceremonies, they’re also formed around informal communities. I’m just as interested in Jewish women who knit a hat for charity because for them that’s an act of tzedakah, or Jewish women who come together and knit pink hats to go to the Women’s March in Washington. To me, that can also be understood as a Jewish-inflected act. For some people it is, for some people it’s not. That’s part of what I’m asking my interviewees. In having these conversations about objects and creativity, we learn more fully what it means to be Jewish in America today.

What else would you like the community to know about your project?

It’s important to know that there’s a long history of Jewish women creating things. When you look back at Europe or earlier time periods in America, there were male artisans and also female artisans. The women artisans are less likely to have their names known but there’s been some good study of the fact that, for example, in early modern Europe, Torah binders were sometimes made from the swaddling cloths used at circumcisions; the cloths were cut into long strips, connected, and sometimes quite elaborately embroidered. You had all of these objects that were very intimately a part of Jewish life that women created.

I also think it’s important for people to think about what it means to be Jewish very broadly, because when we look at sociology and at surveys of what it means to be Jewish today, it means a lot of different things. So, when you look at something like the Pew Survey of American Jewry, you see that more and more Jews are not affiliated with a formal organization like a synagogue or a JCC; more and more, Jews are connecting with Judaism through other kinds of activities. It might be an environmental bike ride like the kind that HAZON runs, it might be through a stitching group, it might be through an urban farm like Urban Adamah on the west coast or the Jewish Farm School in Philly. For scholars, it’s really important to look at the very diverse ways people are being Jewish today, so that’s the context in which I’m thinking about what we call “lived religion,” religion and activity on the ground.

Finally, I am always looking for more people to interview; readers are welcome to reach out to me at jeichlerlevine@lehigh.edu.

Dr. Eichler-Levine will also be speaking about her book at Hadassah Shabbat on May 6 at Congregation Brith Sholom at 9 a.m. The event is free and open to the community.