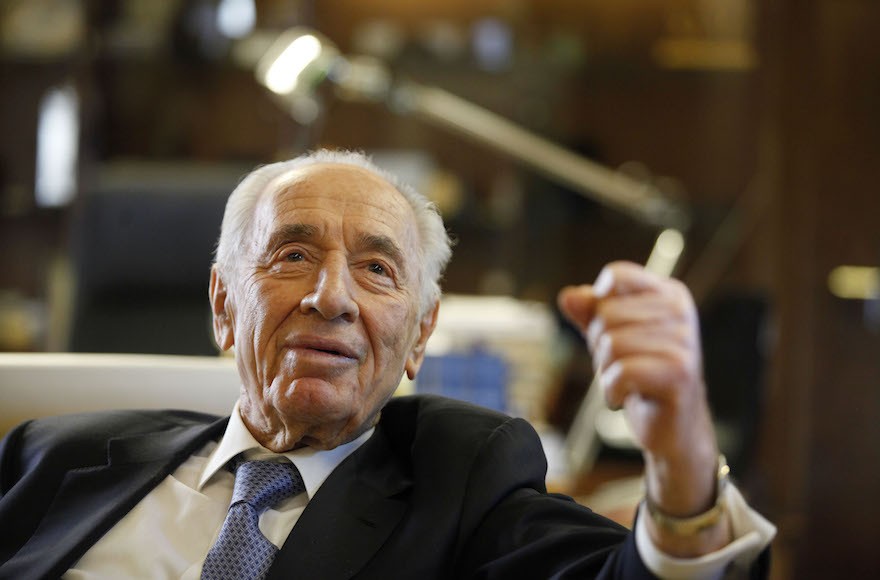 Although the loss of former Israeli President and Prime Minister Shimon Peres affects the entire Jewish community on some level, for some residents of the Lehigh Valley who had the opportunity to interact with Peres, the loss is coupled with a deep sense of respect and fond remembrance.

Mark L. Goldstein, executive director of the Jewish Federation of the Lehigh Valley, had the opportunity to hear Peres speak several times, in addition to traveling with Peres to his ancestral home in Belarus as part of a trip for Jewish leaders. "It was inspiring to spend time speaking with him over meals and learning his personal story in such a powerful way," said Goldstein. "He was so unassuming; he was so interested in connecting with people. He was always focused on the person, the future and really was the conscience to a certain extent for Israel and a lot of Jewish people around the world in terms of the kind of country Israel can become."

"He's the last of the old school that we have lost. He was a wonderful man," added Nate Braunstein, past president of the Jewish Federation of the Lehigh Valley and former UJA national vice chairman. "When I was active in UJA, we spent an evening at a bar just talking about Israel and the Jews and I'm just very saddened that we lost one of the giants of Israel."

Rabbi Moshe Re'em of Temple Beth El in South Whitehall Township also recalls Peres with a personal touch. Re'em was a 16 year-old in Buffalo, N.Y., when Peres, who was then Israel's minister of information, called his Hebrew school to do a Q&A with students. Re’em recalls feeling impressed and proud at the thought of Peres wanting to speak to high school students in America. As a political figure of note in Israel, it seemed incredible to Re’em that Peres would leave behind any distinctions of power and spend time educating young American Jews about Israel.

Michelle Cohen, editor of HAKOL, also heard Peres speak to students, at Colgate University in 2014. Although Cohen does not remember Peres’ exact words in response to a heckler in the crowd who pressed him for details about “illegal settlements,” one thing stuck with her: “The way he conducted himself was honorable. He said something along the lines of yelling not being the answer, and that he would be happy to discuss [the heckler’s] concerns later. It was a dignified way to diffuse the situation without shooting down the opposing views. To me, that’s a hallmark of a respectable person."

Peres, who was the last surviving political leader of Israel who helped found the state in 1948, held nearly every cabinet position during his storied career, including serving twice as prime minister and once as president. He began his career in the Defense Ministry and was the architect of Israel’s nuclear program, but in his later years Peres was more closely identified with the quest for peace with the Palestinians. He was instrumental in negotiating the Oslo Accords, the landmark Israeli-Palestinian peace agreement, and was present on the White House lawn for its signing in 1993.

But for those who have had the opportunity to hear him speak or meet him personally, the loss takes on a new meaning. "Peres once said that 'optimists and pessimists die the exact same death, but they live very different lives!' Thank you, Shimon Peres, for filling our lives with optimism and hope," Goldstein said.