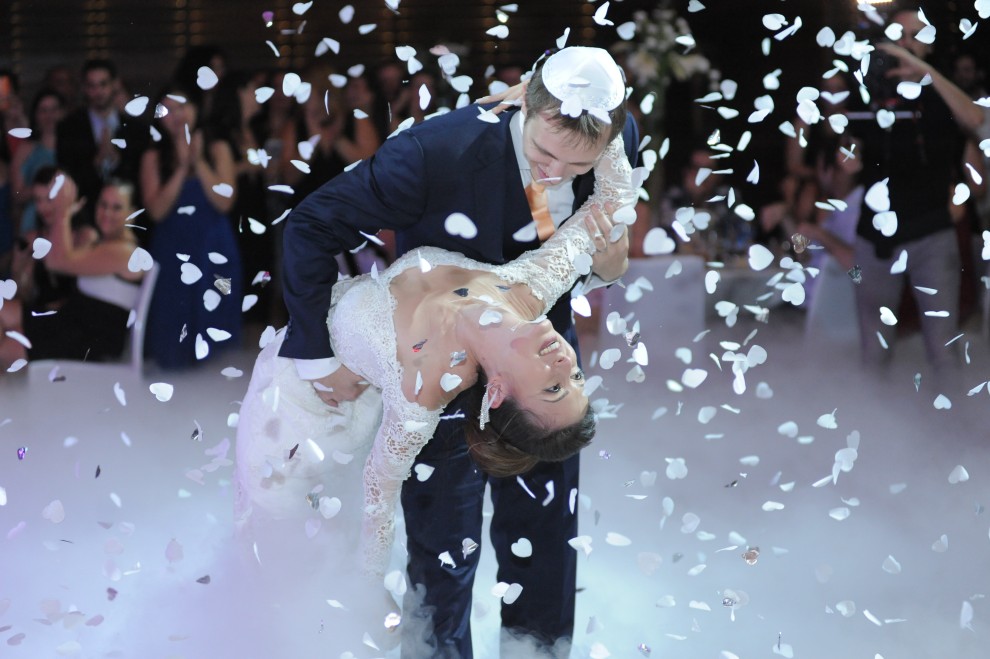 By Michelle Cohen
​HAKOL Editor
When Meidan Keidar first arrived in the Lehigh Valley as a shlicha in 2011, she knew she would be meeting teachers, rabbis and other influential members of the Jewish community – but she had no idea that she would be meeting her future husband and sparking an intercontinental romance.
Keidar’s role as a shlicha, or cultural emissary, meant that she worked extensively throughout the Lehigh Valley, including with the Jewish Day School, all the synagogues, the JCC, including the summer camp, several college Hillels and Federation. Through this role, she got to know many people, including Cantor Ellen Sussman of Temple Shirat Shalom. At a dessert party after Yom Kippur, she was introduced to Cantor Sussman’s son Jeremy Vaida, who she began dating and continued to date for the rest of her shlichut.
After a year in the Lehigh Valley, Keidar returned to Israel, where she went to college. During the following three years, she and Vaida were in a long-distance relationship, something she acknowledged was quite different from the long-distance relationships between different states in the U.S. The couple spoke every day on What’s App and coordinated their schedules to accommodate the large time difference. “When he would get up in the morning, that was when I would have a break between classes, and when I finished classes, that’s when he would have lunch. We would talk during his break, and when I would go to sleep around midnight, he would [have] just finish[ed] work so we would be able to talk on his way home and right before I go to bed,” Keidar said.
“You either grow from it or it breaks you apart, and we really grew from it,” Keidar concluded from her experience with long-distance dating. “We grew and we knew if we could pass this, we could pass everything else as a couple afterwards. We knew it was worth the wait.”
In addition to online communication, they met up in person every few months. Keidar would come to the Lehigh Valley on her school breaks, and Vaida would visit her in Haifa on his. After a year of long distance, Vaida got off a plane during his winter break and proposed to Keidar at Ben Gurion Airport. “He proposed right there because we knew, he’s American, I’m Israeli, we knew that it would mean so much to our relationship. Every time we go through the airport” is now a special moment, according to Keidar – which includes the procession of their 60 American wedding guests. “All the guests that came from the U.S., most of them are from Allentown, had to go through that same gate and the same area where he proposed,” Keidar said.
Since Keidar and Vaida were from different countries, they wanted to bring cultural practices of each country to their wedding. For the American side, Keidar remembers the joy and confusion of her friends when she asked them to be her bridesmaids, a practice not typical in Israeli weddings: “they felt like they were doing it in a movie!” For the Israeli side, the first dance at the 300-person wedding, which is considered small by Israeli standards, was done on a sheet of confetti and dry ice, creating an ethereal effect that dazzled the American guests. Israeli guests had their share of surprises, including the band, which is less common than a DJ at a typical Israeli wedding. Accommodations were made for all guests; the rabbi who officiated the ceremony spoke in both Hebrew and English, ensuring everyone could understand.
After the wedding, the couple moved to Washington, D.C., where Keidar is a shlicha at American University. She explained that being a shlicha on a campus is very different from her work in the Lehigh Valley: “In a community, I get to see and touch a lot of people a little bit, and on campus I see less people but a lot more.”
Although Keidar no longer lives in the Lehigh Valley, she and her husband visit his family here often. “The Lehigh Valley, to me, was and is home in the United States, so whenever we go back to his family, like we just went back this past Thanksgiving, I felt like I was going home because this was my community for a whole year. As much as I am also Israeli and from abroad, this is my community that I worked with and [have] been a part of for so long,” Keidar said.