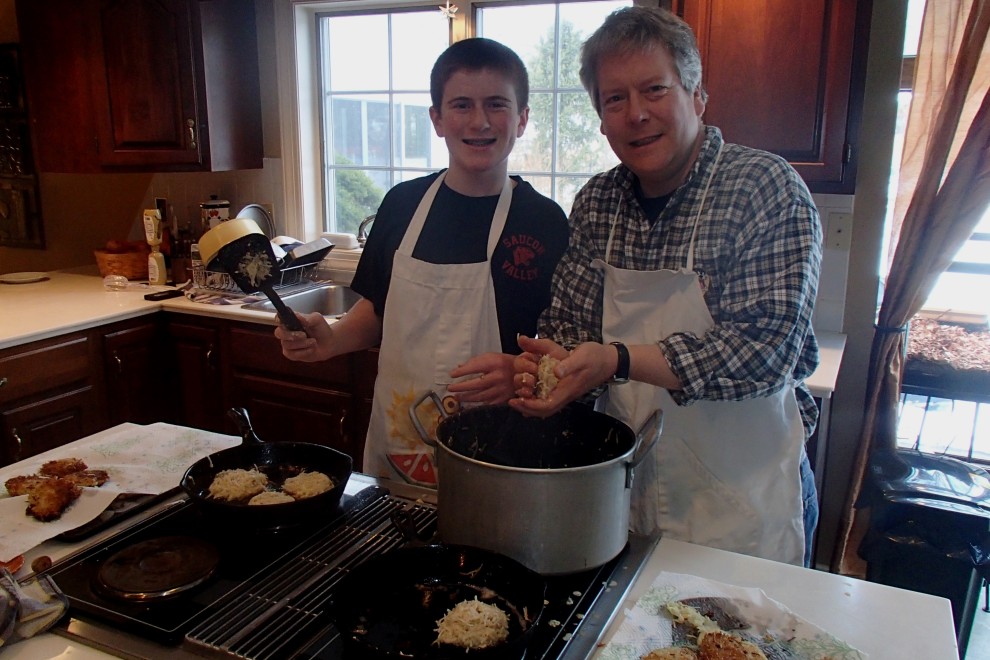 By Michelle Cohen
HAKOL Editor
The Szydlow family tries to make Chanukah a “special event” every year, father Ken Szydlow says. Along with his wife Lisa, Ken has created a series of traditions that the family follows every year that remind their three children of the importance of family, togetherness and a Jewish life at home.
Every year, in addition to traveling to Philadelphia to visit Ken’s sister’s family and getting a visit from his parents in Allentown, the Szydlows, who live in Bethlehem and are members of Temple Shirat Shalom, have their own traditions that they do every year. To start, they hang a large blue flag emblazoned with a menorah on their flagpole to symbolize Chanukah. In a neighborhood with little Jewish presence, the Szydlows want to proudly display their identity at a time when many people hang up Christmas lights. “We live in an area where there’s only one other Jewish family in the neighborhood,” he added, noting the importance of holding onto a Jewish identity in a secular world.
Once the flag is up, the Szydlows arrange some of their large collection of menorahs in the windows, wherever they will fit. Every year, each of the children – 16-year-old Ben, 14-year-old Nathan, and almost 13-year-old Emma – lights his or her own menorah, and together the family lights an array of menorahs that they proudly display. Each year, they go searching for more menorahs to add to their impressive collection.
On the first night of Chanukah, Ben makes latkes with his dad every year. Although many families use baking as a way to come together over the holidays, the Szydlows add a special ingredient to their latkes to add some pizzazz to a traditional ritual. “We put a lot of wasabi paste in them to fire them up,” Ken says, adding that the family then proceeds to a latke eating contest. With no established family champion, every year is a toss-up between all five members of the family. Usually, Ken says, “someone hits between 15 and 20 latkes, and these are big latkes.” He and Ben cook enough on the first night to last all eight nights of the holiday.
What motivates Ken and Lisa to continue these traditions every single year? “It helps the kids remember and enjoy” their Jewish heritage, Ken says. Although they do include traditional practices such as giving and receiving presents, their unique way of building memories as a family ensures that their celebrations will be memorable for years to come.