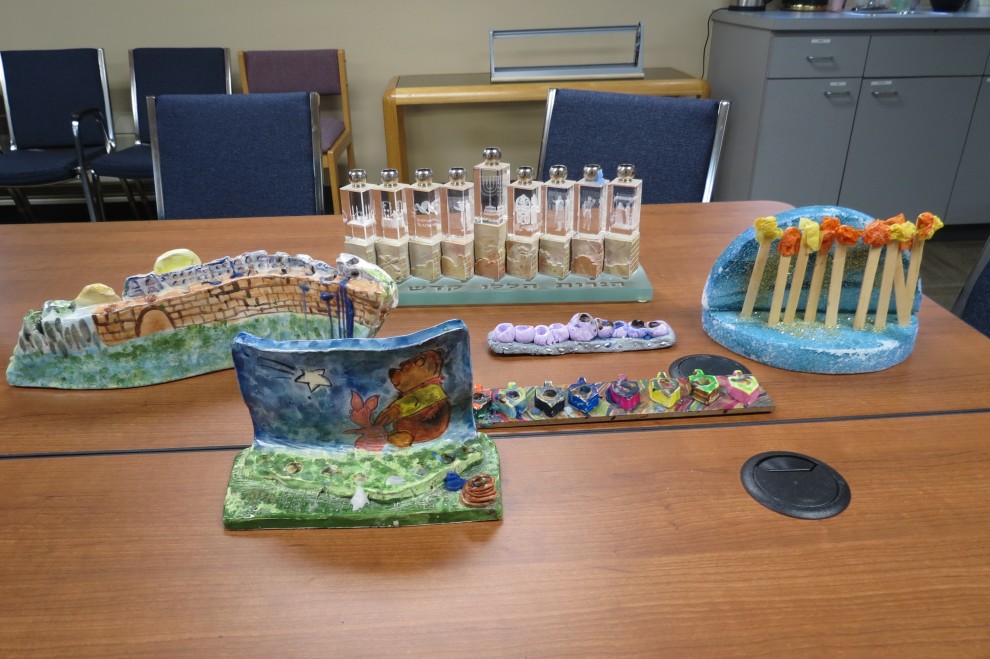 If you drive past the Wilson family’s house during Chanukah, the windows are filled with not one or two, but a plethora of menorahs shining their light through the neighborhood. These would be but a few examples of the family’s collection of approximately 35 menorahs.

“I’m very sentimental, and I have a hard time getting rid of things,” said Carol, who enjoys using her menorahs from other family members, including one that her Aunt Molly brought from Poland when she emigrated to the United States. Her husband, Bob, also has several menorahs from when he was growing up, and others that are heirlooms passed down through his family. The couple have purchased several more together in their travels, like one resembling the Kotel in Israel and a Murano glass menorah from Venice.

The majority of the collection comes from the couple’s two children, Rebecca and Ben. During their younger years, both children made menorahs at the JCC, Jewish Day School and Temple Beth El. Rebecca continued the craft in sixth grade at Barrack, when she chose to make a Rosenthal menorah as part of a craft project. “They have no monetary value, they have sentimental value,” Carol said.

She enjoys keeping a large number of menorahs in the house because “they remind me of different travels, different points in our family’s lives, and to get them out and unwrap them is like discovering treasure, year after year, and I love that,” Carol said.

Some of their menorahs come from the kids’ interests when they were growing up. These include an IDF-themed menorah, a sports menorah, as well as a large fireman menorah where the firemen hold the candles with their hands aloft.

Other menorahs come from family friends. When Rebecca and Ben were born, family friend Shari Sterman, a ceramicist, made a menorah for each child, as well as an etched glass menorah that looks like the Kotel. Each year, the kids light their own menorahs, in addition to the others that they choose.

Every year, the menorahs are taken out of storage and placed in the living room and dining room. Each night, each member of the family chooses a menorah to light, and picks candles from a variety of sizes, shapes, colors and materials.

For Carol, the holiday is about family and traditions, which she hopes to keep going for a long time. “I hope when they grow up and have families of their own, we can divide the collection if they’re interested and they can have the same traditions as us,” she said