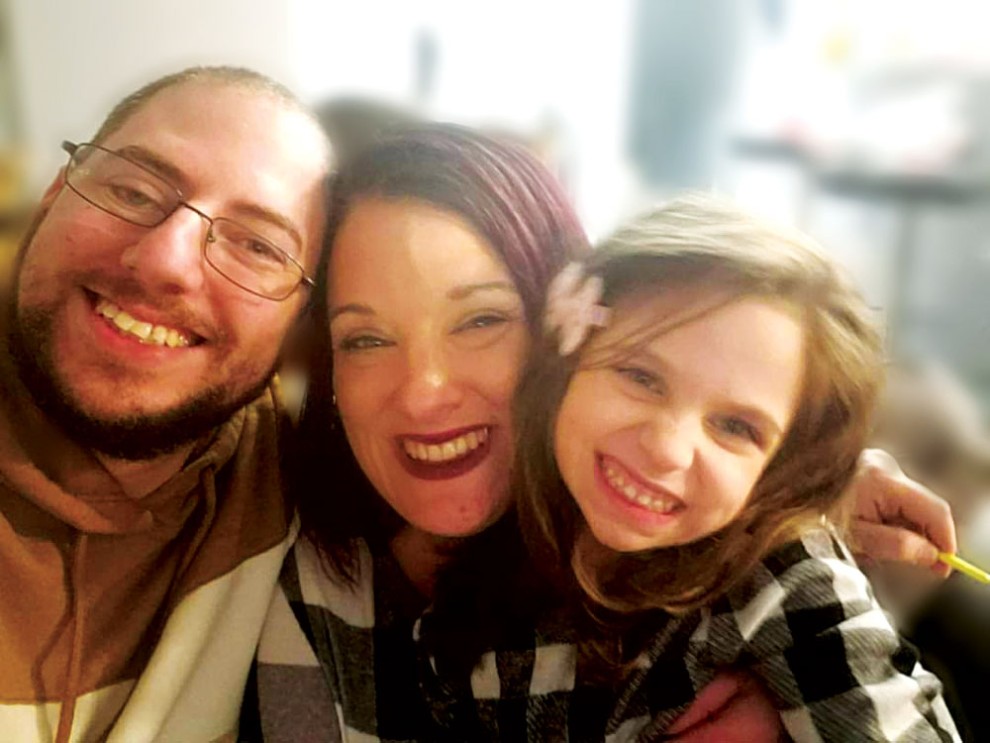 Jen and Zack Einstein fell in love 17 years ago during rehearsals of a play they were in together at Civic Theatre of Allentown. After getting married in 2010, they were eager to start a family. Soon, however, they would discover they were facing a long battle with infertility necessitating in vitro fertilization (IVF) treatments. The first round of IVF resulted in a miscarriage, the second round in the stillbirth of their son, Nachmiel, and the following six rounds were failures.

Then, the miracle came with round nine. Their daughter, Ellery, was born in 2015, and it seemed like happily ever after at last.

The first sign that Ellery might have a developmental delay came when she was two years old. She immediately started receiving speech therapy. Later, once she was a student at the Jewish Community Center of the Lehigh Valley’s Early Childhood Education program, she began receiving speech therapy, occupational therapy and specialized instruction services once a week. Life carried on fairly normally, however, for the next two years.

Last April, when Ellery was 4, Jen noticed her falling to the floor and shaking. Doctors initially wrote it off as clumsiness or bids for attention. Jen knew Ellery’s seizures were more than that and contacted the Children’s Hospital of Philadelphia (CHOP). On Nov. 16, 2020, after a battery of tests, she and Zack finally received the grim diagnosis – Batten disease.

As defined by the National Institute of Neurological Disorders and Stroke, Batten disease is the common name for a broad class of rare, fatal, inherited disorders of the nervous system. In these diseases, a defect in a specific gene triggers a cascade of problems that interferes with a cell’s ability to recycle certain molecules. The disease has several forms that share some of the same features and symptoms but vary in severity and age when symptoms first begin to appear. Each form is caused by a mutation in a different gene.

The variant Ellery has is known as CLN6, one of the rarer forms of Batten disease. Symptoms vary among children, but typically start after the first few years of life and include developmental delay, changes in behavior and seizures. Children eventually lose skills for walking, playing and speech. They also develop myoclonic jerks, problems sleeping and vision loss. Most children with CNL6 die during late childhood or in their early teenage years.

Since finding out about Ellery’s condition, Jen and Zack have been tireless advocates for their daughter. Jen not only sets up the CHOP appointments, but she continues to work on trying to find a cure, speaking with researchers both in the U.S. and abroad. The family drove to Columbus, Ohio, earlier this year to Nationwide Children’s Hospital, where there is a clinic specifically focused on Batten disease. Zack takes Ellery to her weekly speech, occupational and physical therapies.

“We love her whole team at CHOP. They encourage us to keep going with the services. We want to keep her skills and everything as strong as possible for as long as possible,” said Zack.

There is currently no cure for Batten disease. However, there is research being done, the most promising of which currently is using gene therapy to slow its progression. The Einsteins have been in close contact with the pharmaceutical company who recently completed the gene therapy clinical trial. They are hopeful that science may yet be able to save their daughter.

The clinical trial was done at Nationwide Children's Hospital. The goal of the aforementioned trip to Nationwide was to make sure that Ellery wasn't simply a name on a list when the next trial happens, but instead a patient who had an established connection with the Nationwide team. The Einsteins were told that it was likely that Ellery would qualify for the next trial.

Then, a setback:  blood results showed that Ellery has high antibody levels for the virus used to deliver the gene therapy, likely disqualifying her from the next trial.

“She was a miracle to begin with so another miracle could happen,” is Jen’s mantra these days.

When Zack found out that Feb. 28 is Rare Disease Day, he decided he wanted to share what the family is going through beyond just their inner circle. He posted on Facebook to let people know about Ellery’s diagnosis and asked for an e-mail campaign to petition the pharmaceutical company to allow children with high antibodies in their next trial. The campaign got their attention, and they have now been in touch with them more than once. Asking friends and family to stop sending e-mails for now, he shifted to a different way to try to help Ellery and other children like her.

On March 10, Zack celebrated his 40th birthday, and when Facebook prompted him to start a fundraiser for a charity of his choice, he decided to run one for The Charlotte and Gwenyth Gray Foundation to Cure Batten Disease. Started by the parents of two little girls with the same CLN6 variant as Ellery, the funds go to research to find a cure and to providing financial support to families for education, patient therapies and equipment critical to their well-being and rehabilitation.

Since it was his 40th, Zack set the goal at $4,000, never thinking he would actually reach it. Within nine hours, it had already been surpassed.

“I was floored,” Zack said.

The Lehigh Valley Jewish community showed their support not only by writing emails and checks, but also in a more tangible way. Dana Cohen has organized a meal train for the family, so that Jen and Zack can spend less time worrying about what’s for dinner and more time with Ellery.

“Because Jen worked at the front desk of the J for five years, we know a lot of people in the community,” said Zack.

The family has been touched by the overwhelming support they’ve received at this difficult time.

“I was totally shocked,” Jen said of the generosity of the meal train participants.

It has not been easy by any stretch of the imagination, but the Einsteins retain their sense of humor and their faith in God. When asked how the community can best help them, Jen’s immediate answer was, “Praying. All of the prayers.”

The Einsteins hope that sharing their story can raise awareness of this rare disease, help other parents get a diagnosis sooner rather than later, and, ultimately, save Ellery's life.

If you would like to support the Einstein family, you can do so in the following ways:  They appreciate prayers for Ellery (whose Hebrew name is Ester Malka Chana bat Batya Rut). You can sign up for the meal train at http://bit.ly/398JOad. Donations to their fundraiser for CLN6 can be made on Facebook at http://bit.ly/393ri32 or directly to The Charlotte and Gwenyth Gray Foundation to Cure Batten Disease at curebatten.org.