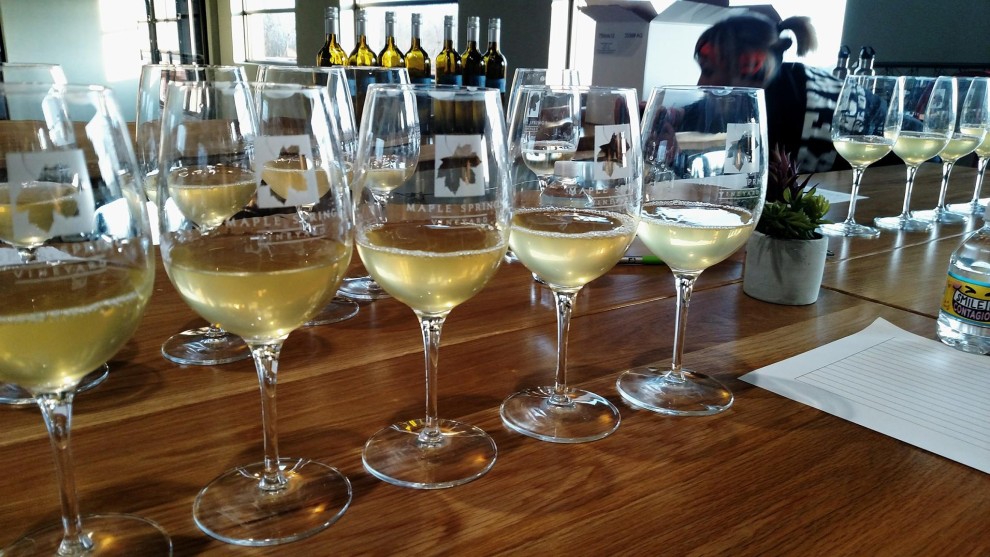 By Monica Friess
Special to HAKOL

“Remember the Sabbath day to sanctify it.” Every week Jews around the world perform this mitzvah with a kiddush (sanctification) over wine. It is fitting, then, that one of our region’s premier winemakers is Jewish.

Native Californian Jef Stebben has been the winemaker at Maple Springs Vineyard in Bechtelsville since 2010. So what prompted a nice Jewish boy from the Napa Valley to make wine in the Lehigh Valley?

While studying toward a career in engineering in 1991, Stebben enjoyed making wine at home. He soon realized that his true passion lay elsewhere and, thinking of a career in beer brewing, he transferred his engineering credits into a Fermentation Science major at UC Davis. His focus soon turned to wine, and he has achieved a successful career in this field.

An internship at the prestigious Opus One winery in California led to jobs at other vineyards and to his perfection of the winemaking process. In 2009 Stebben and his wife and daughter moved to Virginia after a lengthy run as a consulting winemaker in California, during which time he was making wine for up to 12 wineries concurrently. Soon after, the Virginia winery’s interests and holdings were sold, and by May of 2010 he had connected with Maple Springs Vineyard and its owner Marianne Lieberman. “On my third visit with Marianne we planted a vineyard, and I have been here ever since,” Stebben says.

“Winemaking has to be a passion,” says Stebben, whose first vintage at Maple Springs was a 2011 Chardonnay. It takes years to produce a vintage and constant adjustments to ensure the quality. The field is a true blend of art and science, and Stebben’s knowledge of bio- and organic chemistry as well as his extensive palate training enable him to turn an ordinary grape into a wonderful wine.

Creating an environmentally friendly facility was very important to Stebben. “The concept of tikkun olam guided me,” he says. “We are very close to being a net-zero building. All our heating and cooling is done geothermally. There is no waste from the grapes because the remains are composted, and the water used to clean the facility is cisterened and used for land irrigation.”

Maple Springs sells its wines to restaurants (Zahav in Philadelphia is a recent client) as well as to private members who buy by the case. Members are also invited to help at various steps in wine production, from harvesting the grapes to tasting during the aging process. Stebben says he loves “seeing families come together and tending their own row of vines.”

On Friday nights, Jef, SaDawna and Annikah Stebben light Shabbat candles and bless the Creator of the fruit of the vine. It’s nice to know that fruit will be delivered into such capable hands to become a delicious wine.

For more information on Maple Springs Vineyard, visit its website.