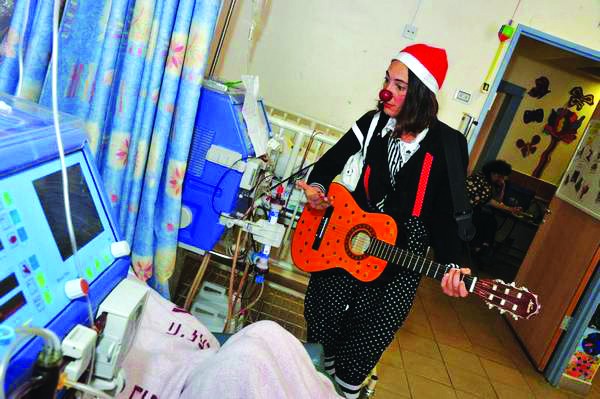 Editor’s Note: The following article takes place at Galilee Medical Center, an innovative Israeli hospital that has had a long-standing relationship with the Lehigh Valley medical community for over 20 years.

I'm a "dream doctor" – a medical clown. I skate around Galilee Medical Center with a red nose, a tambourine and a guitar and work as part of the multidisciplinary care teams in a variety of departments helping to improve patient well-being and care.

In the mornings I come to the Pediatric Surgery Department, which treats children with all types of injuries and wounds from all over the Galilee region.

Not long ago, I arrived at the department and found a wonderful 11-year-old boy who was one of the many casualties of Syrian violence that Galilee Medical Center has treated since March 2013 in accordance with the government of Israel's decision.

A rocket had struck the boy's home, causing serious injuries to both of his legs. His mother brought him across the hostile border to Israel, even though Israel and Syria are formally enemy countries, to try to save his life. He survived complicated and difficult treatments, but at the high cost of losing both of his legs.

Around the world, people talk about Syrian casualties, but here at the medical center, we see each one as a human being that underwent a tragedy.

Every one of them has a story that breaks our hearts, especially the children. When I first saw this boy I got a chill. He was very quiet and introverted, but was inspecting his surroundings with a wide-eyed curiosity.

From the moment he saw me, his eyes warmed with love. He sang out about the funny clown and smiled. Over time, and with a lot of energy and compassion, the boy, his mother and I really connected.

He loved to sing with me while I strummed a couple of chords on my guitar – “Shukran Allah, v’Allah Ho Akbar” (thanks to the Lord, the Lord is great).

His mother, a war widow with strong hope and faith, waited for me to visit. She was smart with a dark cynicism that occasionally overcame her and slipped out. I tried to play songs for her by the Lebanese singer Fairuz. Listening to these songs gave her fleeting moments of happiness that transcended time and place.

I was so moved by the boy's love for my guitar that I decided I wanted to get one for him. I sent text messages to some friends for help and one who had a guitar she wasn't using gave it to me with a music book for beginners.

On the eve of the holiday Yom Kippur I brought him the new guitar and froze when I saw him. He had just undergone another operation and he lay in bed in pain and distress. This was really the first time I had seen him truly sad. He was miserable from the pain and felt down and out about his terrible situation.

I sat on his bed and whispered into his ear, “I have a present for you.” He lifted his head and his dark curious eyes lit up because he could already guess what it was. He said “you brought me a guitar, right?”

I showed him the guitar and laid it in his hands. At first he screamed from pain, “You sing! You play for me, so it won’t hurt me.” Concerned, I turned to his mother for an explanation. She said, "Your voice calms him and helps him heal.” I took the guitar back, tuned the strings and began to sing his favorite song. He began to relax and closed his eyes.

He expressed such love for me and the other dream doctors, that we taught him magic tricks, juggling and even some drumming. During his long and difficult rehabilitation he learned many things and of course to strum his guitar. One day I said to his mother that he will be able to juggle and play for his friends from the neighborhood; his mother replied in a trembling voice, “Are there even any children left in Syria?”

When it was time to say goodbye, four medical clowns, the Pediatric Surgery Department staff and all the other hospitalized children and their families threw a going away party for him with music, magic tricks and activities. His guitar was wrapped, along with his music book and bundles of clothes that he and his mother received for the trip back home to Syria.

He said to me, "tomorrow, Michalita will come, and I won't be here.” I, the loud silly clown, cried inside silently.

He will stay with me always — in my thoughts, when I play guitar, when I sing and even when I pray. I will always keep the young boy from Syria who already passed through too much hardship and whose journey ahead will be even harder still, in my mind and heart.