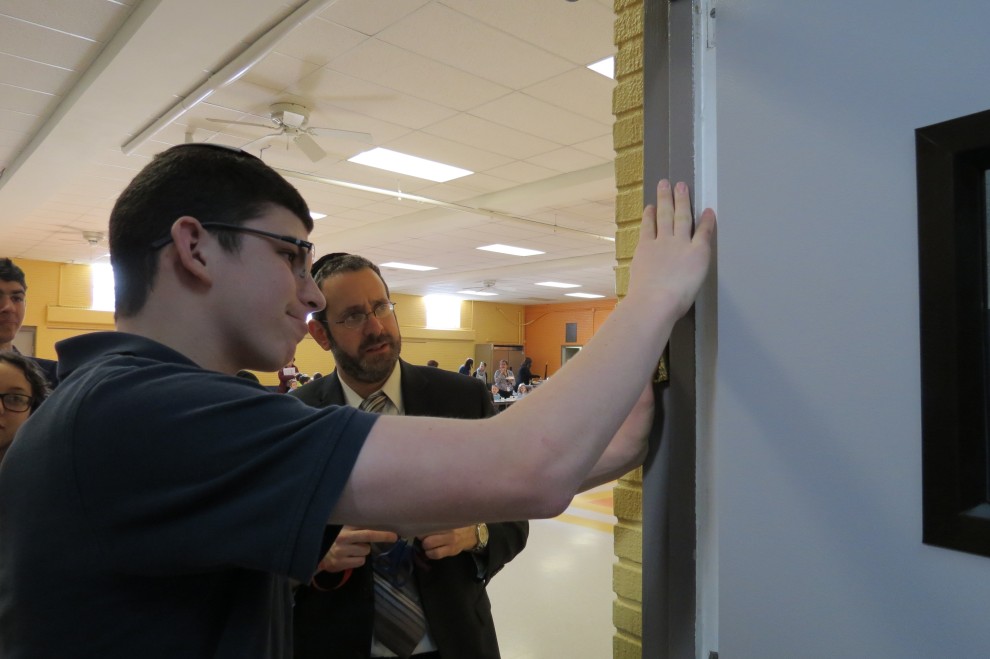 Students, faculty and administration of the Jewish Day School of the Lehigh Valley gathered together on Feb. 6 to hang newly donated mezuzot around the school and re-fasten others that had gotten loose.

The donated mezuzot came from Albert and Eva Derby, who had spare mezuzot after moving from St. Louis to the Lehigh Valley. “We moved from a house built in the 1930s with a lot of nooks and crannies” into an apartment with fewer doorways, leaving some mezuzot with no place to go, Eva said. “Since we know each parchment is kosher, we volunteered what we had.”

“Our children had the benefit of a day school education,” so supporting the JDS is important, she added. “We feel strongly that we support the institutions where we live.”

A total of 15 mezuzot were donated, including some with wooden cases, some painted in vibrant colors and others clear with a good view of the parchment inside. All of the cases come from Israel, and the Derbys know the scribe who wrote the parchments in St. Louis.

Rabbi David Wilensky of Congregation Sons of Israel oversaw the proceedings as students who had reached their bar or bat mitzvah affixed the mezuzot to the wall with tape. As the group traversed the hallways, finding their way to classrooms, staff areas and the kitchen and cafeteria, Wilensky stopped several times to explain the process to children of all ages. The experience helped deepen the kids’ knowledge of mezuzot; while many knew that the Shema is written in the scroll, few knew that the scroll is made out of parchment called klaf and the blessing to hang a mezuzah ends with likboah mezuzah.

Learning opportunities abounded for adults as well. Wilensky was full of knowledge about the proper way to hang a mezuzah as well as which rooms require them. For example, he explained that a closet needs a mezuzah if it is seven feet by seven feet or larger, and the parchments need to be checked for kashrut twice every seven years if they are in a home or twice every 50 years if they are in a public building, such as a school.

Amy Golding, head of school at JDS, said, “We are always trying to find ways to make our school become more beautiful and sacred. In doing so, I noticed some of our classrooms were missing mezuzot. I met with Rabbi Wilensky to review our institution and to find out where mezuzot were required.” After citing some of Wilensky’s teachings referenced above, she concluded, “It is these teachable moments that inspire students and adults alike and connect us from our past to our present.”

As for why Wilensky was involved, he first noted that “it has to be done, it’s a mitzvah.” He further clarified, “The mezuzah signifies the fact that Hashem is everywhere in our daily lives. It’s such an important idea,” he said, adding that kissing the mezuzah symbolizes embracing this idea. “Putting [a mezuzah] up is a Biblical mitzvah, one of the 613 commandments.