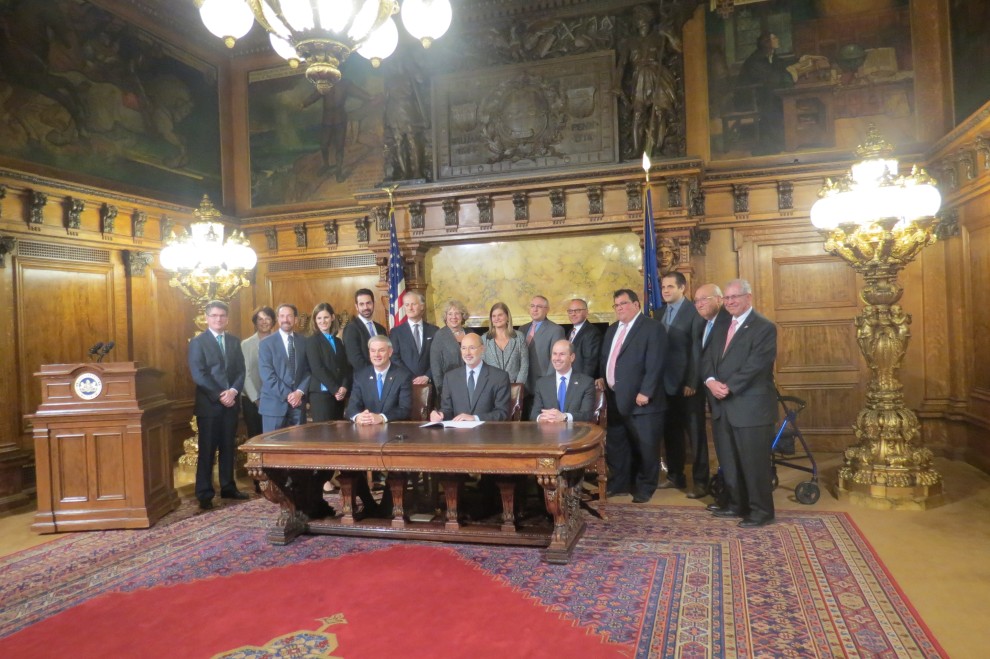 By Aaron Gorodzinsky
JFLV Director of Outreach and Community Relations
On Nov. 6, surrounded by other Jewish community professionals from across the state and the vice consul general in New York, I had the privilege of witnessing Gov. Tom Wolf sign House Bill 2107, the anti-BDS bill, into law. With Gov. Wolf’s signature, Pennsylvania became the 14th state to enact anti-BDS legislation.
HB 2107, introduced by Rep. Matthew Baker (R-Tioga), prohibits the state of Pennsylvania from signing into a procurement contract with any company that performs a boycott, divestment, or sanction (BDS) against Israel and recognizes the importance of the relationship between the United States and Israel.
Before signing the bill, both Wolf and Baker spoke about the deep-rooted friendship that exists between our commonwealth and the state of Israel and how important it is to seek solutions that build bridges for peace in the Israeli-Palestinian conflict instead of looking for economic sanctions that unfairly target Israel. Baker also made mention of the business opportunities taking place between our state and Israel, “where in 2015, over $212 million in exports activity to Israel transpired, which is a 21 percent increase from the previous year, and since 1996 total exports to Israel from Pennsylvania totaled $3.1 billion,” Baker said.
The bipartisan bill passed in the state House of Representatives by a vote of 181-9 and 47-1 in the Senate. The bill follows last year’s passage of House Resolution 370 Condemning Economic, Social, Cultural and Other Boycotts of Israel and Growing Incidents of Anti-Semitism. The resolution, passed unanimously in the house, was co-sponsored by Rep. Mike Schlossberg (D-Lehigh).
Senate Appropriations Committee Chairman Pat Browne (R-Lehigh) helped to move the bill quickly out of committee and onto the floor, making it possible for the governor to sign the bill before the end of the year.
“Israel is an important ally of the United States and it is imperative that Pennsylvania does its part in supporting this great nation,” Browne said. “This legislation prohibits the commonwealth from entering into contracts with businesses that support boycotts and other disruptive activities against Israel. I was pleased to help move this important bill quickly through the legislative process.”