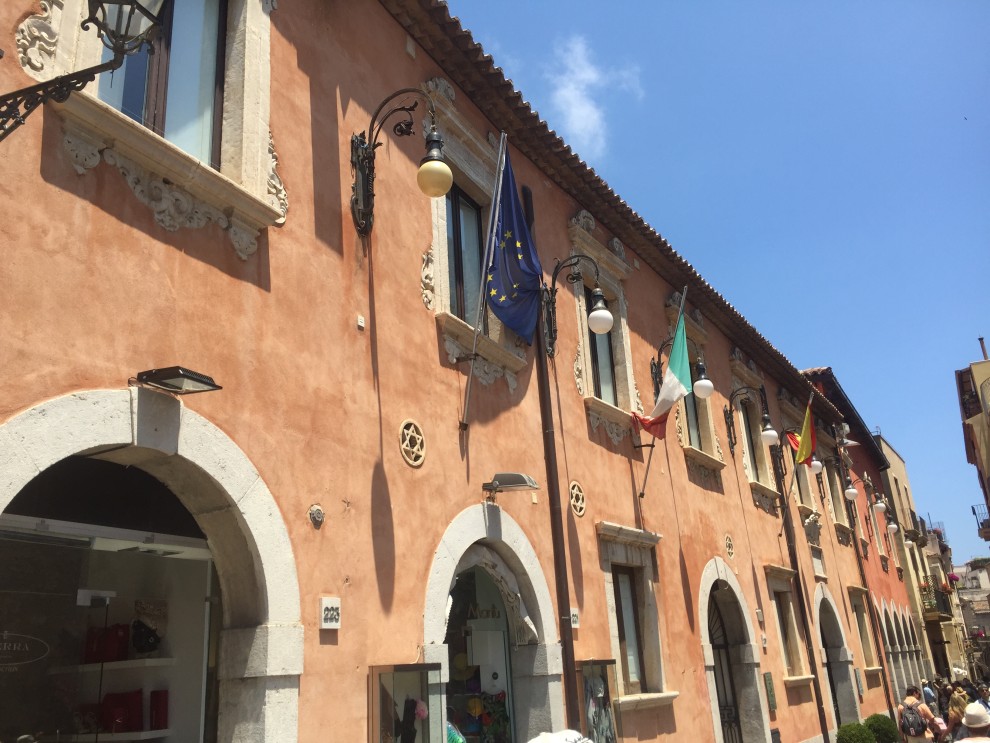 When I embarked on a nine-day Greek Isles cruise, I knew I would see a lot of religious diversity. From the giant cathedrals looming over Rome to the Acropolis in Athens, I encountered a great number of religious sites honoring a variety of deities. The one religion I didn’t expect to find was Judaism – and yet, I was pleasantly surprised by the Jewish history I found in Italy, Greece and Turkey.

The city of Taormina on the island of Sicily, Italy, is composed of winding, narrow streets filled with eager tourists. Atop the fountain in the main square, a two-legged female centaur serves as a mascot of sorts for the town. A large cathedral faces the fountain, and across the street, I was surprised to see three white Jewish stars embedded in the medieval building. I was surprised to see them, especially because there was no other indication on the building now serving as a high-end clothing store that there had ever been a Jewish presence in the city.

The tour guide explained that the Jewish stars were remnants of the past, when the area had served as a ghetto. Although the building was repurposed, the stars remained as part of the architectural design. This small mention of ancient Judaism in the midst of a commercialized, modern area prompted me to search for more. What other indications might ancient Jews have left that they once lived and prayed in cities I never associated with my own religion? To my profound happiness, I was able to find more concrete indications of Judaism elsewhere.

Delos, a small island off the shore of Mykonos, Greece, bears immense significance to Greek mythology. It was revered as the birthplace of Artemis and Apollo, two central gods of the Greek pantheon. According to legend, Apollo, the god of the sun, blessed the island with a good climate for growing crops and a penchant for sunshine that has remained to this day. Unfortunately, not much else has remained – the main city of Delos has been reduced to a shadow of its former self, an archaeological puzzle still being deciphered.

The center of the town is home to temples surrounding a large marketplace. The nearby map described several temples for most of the main Greek gods, but those were not the only places of worship on the island. Temples were also erected as sanctuaries for the Syrian and Egyptian gods. It was believed that when people traveled to the island, they brought their gods with them. Even so, I was shocked to see a map point labeled “Jewish Synagogue.” When I asked to see the synagogue, I was told that it has not yet been excavated. The building’s state was thus unknown, left to decay over centuries. However, as the tour guide explained, there was still a great deal of knowledge understood by modern archaeologists about the site.

Based on Delos’ dates of occupancy, this was the oldest synagogue in ancient Greece. Sitting near the stadium in the residential area of town, the synagogue was convenient for the Jewish inhabitants of the island. An even more astonishing fact is that Jews, among all non-Hellenistic worshippers, were given the freedom to practice their religion. While there is still a great deal unknown about the site, including a debate about the building’s true purpose, the tour guide on Delos was clear: this was a synagogue, and its presence out in the open displayed a degree of religious freedom unparalleled in the ancient world.

I next explored Ephesus, which is located by modern Kusadasi, Turkey. Much of this Roman city has been excavated, and some of it has been preserved nearly in its entirety. One impressive structure is the Celsus library, dedicated to a governor of Asia, and decorated with statues of Roman deities representing the governor’s virtues. Amidst this pagan environment, a carving of a menorah decorates the steps.

Labeled as “Menorah, seven branched candlestick Judaic symbol,” this is the only clue of a Jewish presence in this ancient Roman city. The carving led to more questions than answers – why was this carved there? Was it intended for a similar purpose as the menorah on the Arch of Titus in Rome, indicating pride in the conquest of Jerusalem and the sacking of the Temple? Or was it a positive place, a meeting point for the Jews in the community? Though debates remain, the truth has been left to dust.

The impression these three sites left upon me was made more profound by the incompleteness of the situation. I understood little about the lives of these ancient Jews who once called Italy, Greece and Turkey home, and I became determined to learn more. Upon my return home, I researched the sites, and the controversies that linger showed me that there is no solid answer to my question. Like the others who travel there, I am left to wonder and imagine the lives and stories of Jewish people of the past. And hopefully, one day, we will be able to piece together these clues from the past and gain a greater understanding.