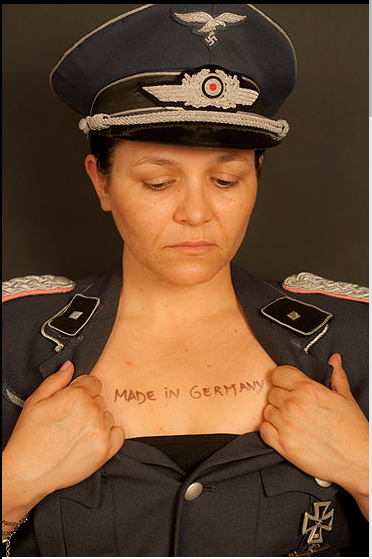 “We all have a family album we’d rather put on the top shelf,” says Sabine, a German character in the play “Between Two Worlds” by Sara von Schwarze. She describes her own family then, a grandfather who she remembers for his kindness but, she admits, could have been a Nazi.

“What’s in your album?” Sabine asks Ruth, the daughter of her lover Abraham. Ruth, who was born in Germany but brought up in Israel after her parents converted to Judaism, ponders her own past. Ruth is played by von Schwarze, who wrote the play based on her own life experiences.

Over the summer, von Schwarze will bring her play to Yoav, the Lehigh Valley’s sister community in Israel, as part of the Chevruta lecture series sponsored by Partnership2Gether. The series will feature several speakers discussing different aspects of Jewish identity.

Von Schwarze’s story begins in 1971, when she was three years old and her German Catholic parents converted to Judaism and moved to Israel. Brought up as an Israeli Orthodox Jew, but with some unique contradictions to her identity, von Schwarze wrote the play as a way of coming to terms with her split identity.

“When you grow up German in Israel you feel you were born guilty,” Ruth says in the play, speaking in Hebrew before transitioning to German. One of the play’s singular features is the intersection of languages between the characters, with Ruth speaking Hebrew as her mother tongue as well as some German, and both Abraham and Sabine speaking German as their first language. Abraham speaks some Hebrew, but Sabine speaks none, which gives Ruth the opportunity to exclude her from the conversation. The languages switch at a dizzying rate, mirroring Ruth’s – and von Schwarze’s – struggle to find an identity that fits both sides of their history.

For von Schwarze, the Herculean task of trying to reconcile her two identities began in childhood. Speaking to the curator of a traveling exhibition of the 50th anniversary of diplomatic relations between Israel and Germany, she said, “When I was eight or nine, I realized that I come from the bad side,” and describes the revelation as a shock and an “open wound.”

In the play, Ruth recalls when she was 10 years old and a teacher asked the class to tell the stories of how their grandparents survived the Holocaust. But her story was very different: she had photos of her grandfather in a Wehrmacht uniform, and stories of when her grandmother “danced at parties when Jews went up in smoke.” She stayed silent as the class told their stories, dealing with overwhelming feelings of guilt and shame.

“I felt like there is dirty, filthy blood running through my veins,” von Schwarze said of similar experiences hearing survivors and their families discussing the Holocaust.

The guilt became overwhelming for von Schwarze’s father, and the Abraham character in the play, who left his family after some time and moved back to Germany, eventually moving in with a non-Jewish woman. In the play, Sabine has no idea that Abraham the Israeli Jew was born as Ernst the German Christian, given his deep connection to the Jewish community in Munich and plethora of volunteer commitments. She even tells Ruth of a planned celebration of Abraham in the Jewish community, as thanks for his volunteer service.

The play’s plot takes place over the course of one night, which begins with Ruth breaking into Abraham and Sabine’s home after not seeing Abraham for years. She confronts him about the choices he made and how they affected her, grappling with the idea that he identifies with his Judaism that he chose rather than the German nationality he was born into.  But Ruth is also running from something in her past – a gunshot she fired while on the job as a military photographer. The play concludes with the resolution of that conflict – her gunshot did not kill anyone – but opens the doors to several others. Will Ruth reconcile with her estranged father? Will she accept Sabine, who is about her age, as his partner? And what will she tell the baby she is pregnant with about his or her past – will the identity crisis be transferred to another generation?

The play has received acclaim from Israeli critics, with News1’s Alis Blumenthal calling it “a juicy drama whose power is derived from reality,” and Haaretz’s Yasha Krieger praising the play for moving past cliché representations of the Holocaust in Israeli theater. Since its debut in 2014, the play has been produced in both Israel and Germany.
Von Schwarze grew up in Tel Aviv, in a neighborhood made up of survivors and their families, and served in the IDF for two years despite feeling conflict over holding a gun. She has three daughters and she still lives in Israel today. She is an actress, director and lecturer in addition to being a playwright.

For von Schwarze, the play helped her come to terms with her split identity, and how to live with the questions and guilt that still remain. “Just live,” she says in the play, a reminder of the self-acceptance and healing she has gained from the experience of writing and performing her family’s story.