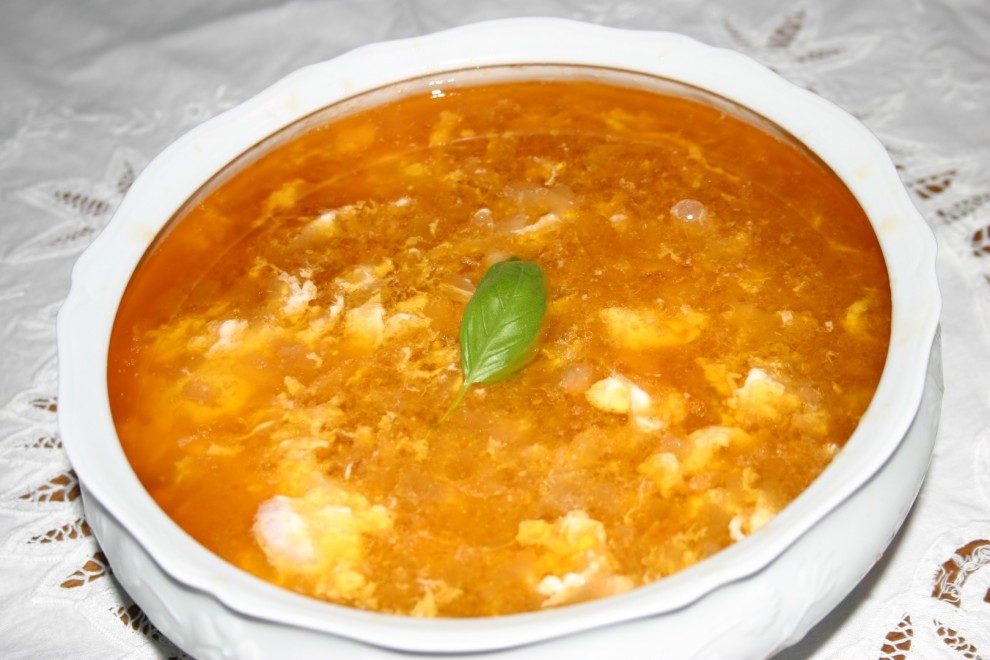 Last year, my sister, who lives in France with her family, came to visit me. After a few days of reminiscence and intensive shopping sprees (it seems that, compared to France, going shopping in Pennsylvania is like going to paradise), we began to talk about our projects and dreams. As I was telling her how I am now in the process of interviewing people for a series of articles for HAKOL about recipes and the story behind them, she got really excited and asked if I could interview her too.

“If you were interviewed, I said, what recipe would you want to talk about?”

“I know exactly what recipe I want to talk about, she said. I would talk about the ‘hen with golden egg’ recipe,” she said.

It seemed surprising that she would want to talk about this particular recipe amongst all the recipes we learned from our mother and grandmother. The recipe, which we prepare for Simchat Torah only, is in reality a chicken and chick pea soup with poached eggs. It is delicious, but it wouldn’t be the first recipe that would come to my mind if I had to tell a story about a family recipe.

“First of all,” my sister said, “I always loved the name. As a child, I used to really think that a special hen with golden eggs had been used to prepare the dish, and that made it special. Later, of course, I knew it wasn’t the case, but I still kept a fondness for the recipe.

“But I also love the dish because it always reminds me of my grandmother [and when] she used to live in the apartment condo above ours. She was the one who taught me the recipe, and because she knew of my special fondness for it, she sometimes prepared it especially for me, and invited me (and only me!) over to her apartment for the occasion,” my sister revealed. “We would eat it together and we had a great time together.

“It must have been at least 30 years ago,” she continued, “but I still remember how happy it both made us feel. We would talk about anything, we would laugh together and, later, we would both sit in her balcony, where we would secretly share an indecently sweet pastry. [Our grandmother suffered from diabetes and she knew that our Mom wouldn’t have let her have the pastry.] Even today, I always picture my grandmother smiling over some over-creamed pastry (her favorite) every time I prepare the ‘hen with golden eggs.’”

But there was more. My sister also loved the recipe because it revealed something about the family of Mami, which was what we called our grandmother in French.  She said the recipe was actually not a Simchat Torah recipe at all but a tradition in Algeria (where our grandmother was born) for all Jews of converted descent to celebrate their conversion. Once a year, these families would prepare the ‘hen with golden egg’ recipe with some kind of pancakes. Family and friends would gather together, for a nice evening filled with food and songs.

Neither my grandmother nor her Dad knew who had converted in his family, but because they knew they had the tradition, they just knew someone had. Later, after her parents passed away, and she had to leave Algeria for France, the tradition was lost and only years later did Mami remember it.

“Mami told me,” my sister said, “that one day Mom was complaining about having no clues about what to prepare for Simchat Torah and asked her for ideas. So my grandmother said: What about preparing ‘the hen with golden eggs?’ So she taught Mom to make it. The recipe was such a success that we decided to make it a Simchat Torah tradition, and that’s what it has been ever since!”

“You’re right,” I said, ready to write all about it.

“But wait!” my sister said. “I’m not done! What really makes the recipe special for me is something very personal that I never told anyone.” It’s true that each time I’m preparing the recipe, all these stories from the past I told you about come back to me.

“Each time I look at this delicious soup with chick peas and poached eggs,” she said, “I can’t help but thinking that life is like the soup: It is filled with small problems like chick peas, but from time to time you have the chance to find a golden egg that makes it worthwhile.”

In a big pot, sauté oil and paprika with chicken on medium heat until chicken is golden on all sides. Remove chicken from pot and set aside. Add chopped onions to the pot. Sauté with oil and paprika on medium low heat for at least 5 minutes. Add chicken, chick peas and 6 c. water to cover chicken. Cook, uncovered, for 50 minutes to 1 hour on medium low heat, then another 10 minutes on low heat. Gently remove chicken to a platter, covering it immediately with aluminum foil. Add salt to the soup.

Just before serving, increase heat until soup comes to a boil. Crack eggs one by one over soup, placing hands as close to the soup as possible. As soon as eggs turn white, ladle soup in soup bowls.

The chicken can be served with or after the soup.