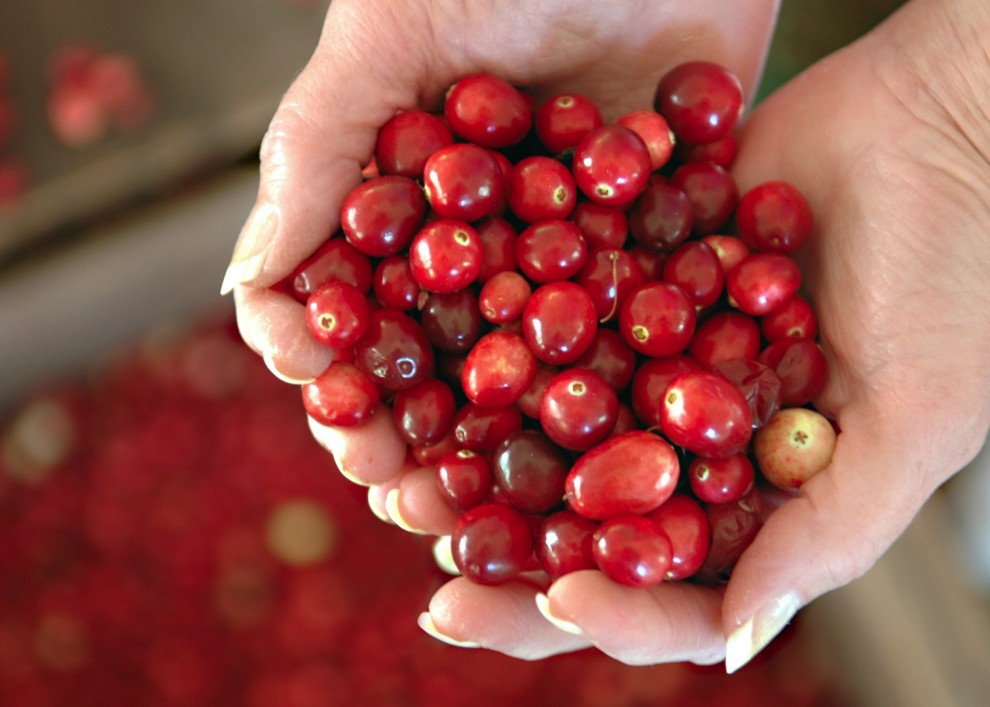 Cranberries are one of nature’s most mysterious fruits. Although they are native to New England and can be grown in many states, there is so much that is not commonly known since most commercial cranberries are grown in very out of the way locations before making it to our Thanksgiving Day tables and other meals. Let us travel to a typical growing field to see the mysterious berry, vaccinium macrocarpon, and its surprises.

We head out to find a coastal growing area and it is hard not to be distracted by the beautiful red, gold and flaming yellow amber leaves against a backdrop of a clear pristine blue sky. The weather in coastal New England is now quite brisk with an early morning crispy chill; the air is bracingly fresh. Suddenly, we see a huge lake that is crimson red because of the vast number of floating red cranberries. This, my friends, is a bog. Yet, there is much more here than we initially see.

What is a bog? A bog is a strange eco-system composed of sphagnum peat moss, sand, gravel and a highly acidic soil that creates an environment so harsh that it is almost sterile for just about any living plant. Nothing else is growing here in our bog, yet the beautiful cranberry, surprisingly, loves this environment and thrives in it.

What about the plant itself? Now the area is under water so we have to look closer to see the plant, which actually does not spend most of the growing season in this flooded environment but needs the floods occasionally, as we shall soon see.

The cranberry looks like a vine and from a Torah/kosher perspective is really a tree. Even here, mysteries abound, since the blessing (bracha) beforehand is often mistaken for “ha’adama,” similar to of strawberries, but really should be “ha’etz” which is that of grapes and apples.

The plant does not commercially produce fruit until it has about five years of growth. Once growing, the plant is so hardy that it just keeps on working almost indefinitely. Some plants in our Massachusetts bog are 150 years old and still fruitful.

The berry has many health benefits, many of which are derived from the acidic soil; here, it shares similarities with its local cousin , the wild blueberry.

Why the flood? Why is it grown in such hard-to-reach environments? The grower explains that the berries were initially so difficult to detach form the tree that the rakes that are commonly used for other berries just did not work. Every berry had to be singly pulled from the tree, in a backbreaking, labor intensive and very expensive operation.

In order to be financially solvent, the growers had to find another method. They discovered that if they flood the fields, then the berries will be easily removable in viable quantities. The bog is manually flooded and a special machine with paddles detaches the berries and lets them float on the water until they are vacuumed up by large harvest equipment.

The flood has another kosher benefit: Any berry that was compromised by the presence of insects will generally not float on the water due to the telltale holes and sinks to the bottom.

The fields are manually flooded for short periods in the summer to discourage the growth of predatory insect pests and in the spring to protect the plants from late frost. The cranberry has a very high acid content which is the source both of the tart taste and of its highly touted health benefits such as discouraging infection. Common bacteria do not like the high acidity and there are many startling discoveries regarding this berry.

In Eastern Canada, the berry is even more acidic and perhaps even healthier for you, as long as you manage the taste without piles of sugar. This writer has conducted a summertime experiment which involved taking a bag of organic (no chemicals used) raw, washed wet Canadian cranberries and leaving it in a hot area for three weeks. The surprising result : They did not spoil and were totally edible! No mold, no fungus, no bacteria. In one pH test, they were about 1.1 – a level too harsh for common mold.

Our visit to the cranberry bogs complete, we turn to leave, but not before we enjoy some tart, red berries that make us pucker our lips from the acidity.