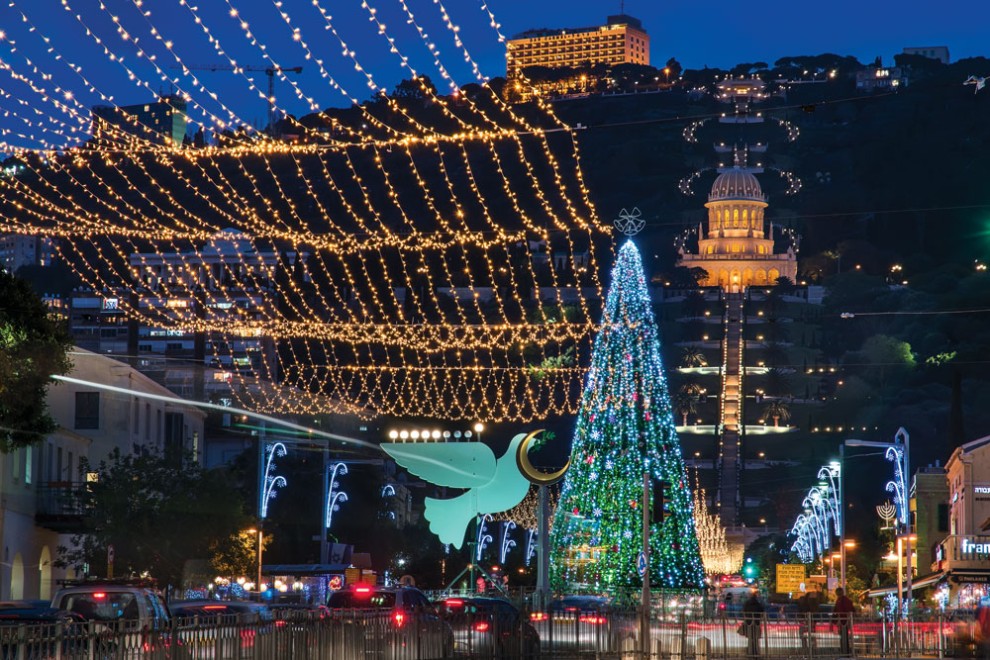 The Northern city of Haifa is a center of co-existence between religions, cultures and people. Haifa is a beautiful northern port city that extends from the Mediterranean Sea to the north slope of Mount Carmel. It is also the third largest city in Israel and is often called “the capital of the North.” Haifa is an important industrial and cultural center and holds one of Israel’s main maritime trade centers. Its residents are both Jewish and Arab who live side by side and make this city very special. The city is also home to the special Baha’i gardens, rich of history and culture, and every year during the month of December, those things that make her so special are in the spotlight.

When people say Haifa and December in the same sentence, the immediate association I get is to lights on the streets, illuminated menorahs next to fir trees, colorful lights dangling from the windows of houses and lit decorations of snowmen and moose and the smell of warm chestnuts alongside Chanukah donuts and traditional Knafeh. Some are things that might be common in other parts of the world, but not everywhere in Israel, and not mixed with different faiths’ holiday symbols. Haifa in December is so beautiful, romantic and mainly so different. There is something so calm about her, something that feels right, and something that makes people really smile to one another, instead of being suspicious or afraid.

Every year in December, the city of Haifa holds a festival called “The Holiday of the Holidays Festival.” It is intended to express the character of Haifa as a mixed-populated city, where all religions live in co-existence and tolerance. The name of the festival expresses its intention to mark the religious holidays that take place in December and around it:  Chanukah, Christmas, Ramadan and Eid al-Fitr, which fall at varying times throughout the civil year and may fall in December, according to the Muslim calendar.

In the beginning, the festival focused mainly on outdoor art, and on meetings between Jews and Arabs. Over the years, the festival slightly changed. Besides the fact that Ramadan fled for the summer period (once every 30 years the three holidays will meet again for another three years), the festival has evolved and expanded into a celebration of all cultures in the country in general and in Haifa in particular.

Festival activities take place on the weekends of December. They exist at various sites in the city, but most of them take place in the Wadi Nisnas neighborhood and in the German Colony neighborhood. During the festival days, the city's museums are free to all visitors. Activities include shows, parades, concerts, art exhibitions and street performances, tours and conferences, fairs and markets and special activities for children.

The Holiday of Holidays Festival will mark its 26th year in Haifa this month, and the city will once again show its unique beauty and good neighborliness. Tens of thousands of visitors will come to the city to attend the festival's events and enjoy the diversity, hear both Arabic and Hebrew, enjoy the scents of roasted black coffee, warm chestnuts, pastries straight from the oven, Arabian sweets with a winter sea breeze (which you actually wait to feel in such a hot climate country as Israel), and celebrate a colorful and joyous street celebration full of light. There is really no place like Haifa, I guarantee it!