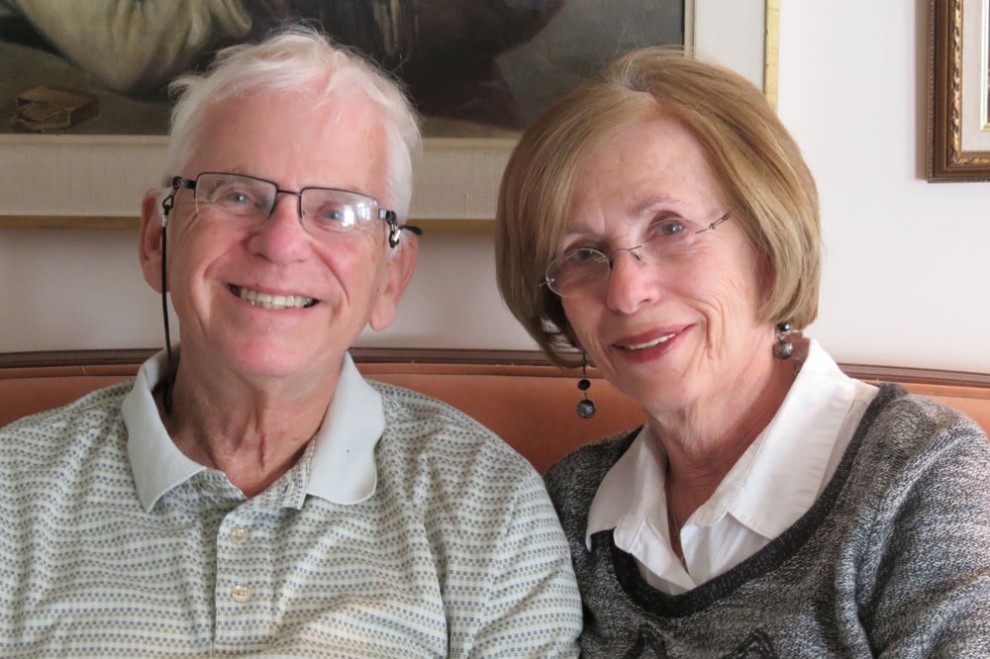 Editor's note: We continue our series on individuals who have laid the foundations for the future of the Lehigh Valley Jewish community through their generosity this month by featuring Dr. Larry and Eva Levitt.

Eva Levitt had never heard of the Lehigh Valley when she and her husband, Dr. Larry Levitt, first met the man who would lead them to create a life here. Having befriended Leonard Pool, the founder of Air Products and Chemicals, after Larry cared for his wife as a resident at Memorial Hospital-Sloan Kettering Institute in New York City, the Levitts did not immediately find themselves in Pennsylvania. First, they lived in Tampa, Florida, where Larry served in the U.S. Public Health Service, and then Boston, Massachusetts, where he trained in neurology. Eventually Larry was convinced by Pool to become the first full-time neurologist in Allentown. He spent his career building up the neurology division at Lehigh Valley Hospital, and there are now 25 neurologists in the medical group that he founded. He co-authored a neurology book, used by students and residents around the world.

Part of why they agreed to come to Allentown was because of the thriving Jewish community which awaited them here. Coming from a big city, Eva was a bit skeptical, at first, that she could be happy in a smaller community. But they had been told that it was a great place to raise a family, and “it turned out to be true,” she said.

Their children attended the Jewish Day School of the Lehigh Valley, which the Levitts described as “an inviting kind of place,” and getting to know other families there led them to more involvement in the community.

However, it was already their disposition to get involved, based on their upbringing.

“I have to credit my father for the fact that we got as involved as we did,” said Eva of her father, who survived Auschwitz and went on to lead his family to the United States. “I grew up with what I learned from him. You always have to give back, and you'll get more in return than you actually give.”

This philosophy led Eva to eventually serve on the JDS board of directors and spend a term leading the Jewish Federation of the Lehigh Valley as president. Larry has also served on the board of Federation and various committees. In addition to their family influences, he credits mentors such as Pool and his successor at Air Products, Edward Donley, as well as Bob Cathcart of Pennsylvania Hospital, for being examples to him of concentrating on giving back.

When the Levitts moved here decades ago, they were very impressed with the active JDS and Jewish Community Center and synagogues in every denomination. They have continued to be impressed ever since and are “so happy that we moved here.” Their hopes for the future are for that vibrancy to be sustained and only grow.

“My hope is for the JDS to grow… because I believe that in order to have future Jewish leaders, you need a good Jewish self-image, and I think that students who go to the JDS get that,” said Eva.

“Again, there are synagogues here which represent every denomination. We hope that they grow, too. These are challenging times for places of worship… and what Barry Halper is doing is very important,” said Larry, referring to an initiative led by Halper to attract more young Jewish families to the area.

As members of Congregation Sons of Israel, Rabbi Nisan Andrews recognizes the Levitts as “consummate givers. Our synagogue and community is infinitely richer due to their generosity in both time and effort. Yasher Koach!”

The Levitts have also been honored twice at JDS galas for their commitment to the community.

“Eva and Larry Levitt have served as role models and leaders for decades. They embody a life-long commitment to communal welfare, that we hope to instill in our JDS students, and that we know is crucial to building and sustaining a strong Jewish future. During their more than 40 years in the Lehigh Valley, they have worked to make our community more caring, resilient and forward thinking,” said JDS Head of School Amy Golding.

The Levitts, working with two other families, established Tikvah House, a Jewish residence for adults with special needs, at which their son is one of three current members. Jewish Family Service is now partnering with Tikvah House for its Jewish programming.

“JFS is a remarkable institution, with excellent leadership, that does so much good for so many people,” said Larry.

The Levitts believe that the Lehigh Valley Jewish community has benefitted from the work of those who came before them, and is in good hands with the new leaders of today. As for themselves, they believe their legacy is in the continued Jewish life of their family.

“What we really feel proudest of is that our kids have adopted this. Our grandchildren have attended a Jewish Day School, whether here in Allentown. or in Ohio, where our son Marc and family lived before moving to D.C.”

Federation Executive Director Jeri Zimmerman summed up the impact of the couple this way:  “Eva and Larry have been a dynamic duo who demonstrate love of community in so many ways.  Their actions speak louder than words!”