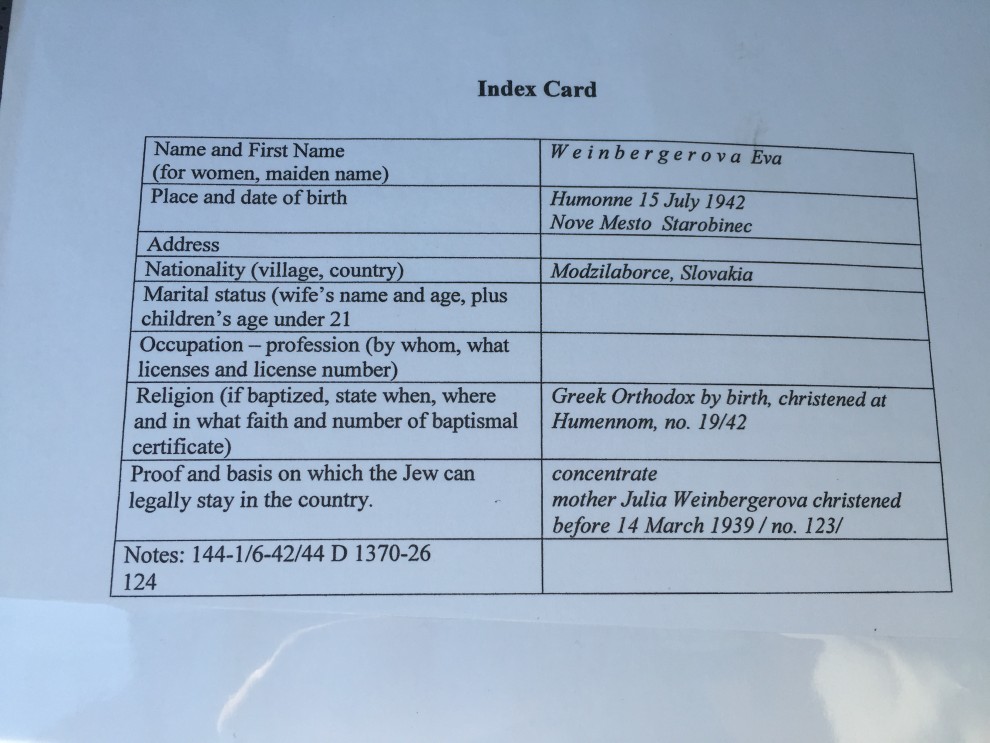 By Monica Friess
It’s estimated that the Jewish population of Humenne, a region in what is now Slovakia, was 2,300 in 1941. During the Holocaust over 90 percent of those Jews were killed. There were only six children among the survivors. Two of them live in the Lehigh Valley.
“Hello, Eva? This is the other Eva” began a conversation that would reveal a shared past and forge a solid friendship. Eva Derby and her husband Albert were living in Missouri and deciding whether to retire in Allentown, where Albert’s brother resides, or Israel, where one of their three children lives. She called Sons of Israel looking for information on the Jewish community and Rabbi Wilensky put her in touch with Eva Levitt, a longtime resident and active community member.
In that first conversation, they learned that they were born in the same hospital within months of each other. Each had survived with their mothers by posing as Christians, and they even have a family connection through marriage. In 1942, Derby’s mother was able to obtain false papers from a local priest certifying that she had converted to Christianity before the war and that her daughter Eva was baptized. A law deemed that pre-war converts could keep their family with them, so Derby and her mother lived with her maternal grandparents while her mother worked as a domestic. Derby’s father had been deported to Auschwitz a short time before she was born.
In 1944 the same priest who provided them with papers turned them in to the Germans, and Derby, her mother and grandparents were deported to Auschwitz. Upon arrival a German officer took her mom off the line of “converts” saying his wife needed a maid and his three-year-old daughter needed a playmate; thus they were able to survive the war. In 1945, after the officer fled his home, Derby and her mother made their way back to Humenne to search for and await any surviving family members. None returned. In time, it was arranged for Derby’s mother to marry an elderly widower known to the family who lived in the United States. In 1948 Derby and her mother came to live in New York.
Eva Levitt’s father, who owned and operated a lumber business, was deferred from deportation because his labor was needed for the war effort. During this time he asked a school friend of Eva’s mother – Geza Haytas – for help in acquiring false papers, which the Haytas family (with whom the Levitts maintained contact throughout the years) did. Geza also found a small room where they could live, telling people that Eva’s mother was his cousin and her husband was in the army. She, like Derby’s mom, worked as a domestic. Though Levitt’s father also had false papers, he knew they wouldn’t prove useful if he were forced to show he was not circumcised. Not wanting to risk revealing the identities of his wife and daughter, he did not carry them. When his service at the lumber yard was no longer needed he was deported to Auschwitz.
After the war, Levitt and her mother returned to Humenne to await, as Derby did, the return of any family members. One day her dad – hardly recognizable at 78 pounds and recently recovered from typhus – stepped off the train. On another day her maternal grandmother returned. In 1949 Levitt and her parents secured sponsorship from relatives living in New York. A year later they were able to bring over Levitt’s grandmother.
Levitt and Derby, who each have three children and six grandchildren, marvel over the similarities in their stories and their finding one another this way, but say there are no coincidences. Using the Yiddish word signifying fate, destiny or a fortuitous match, each say it was bashert that they are together. Again.