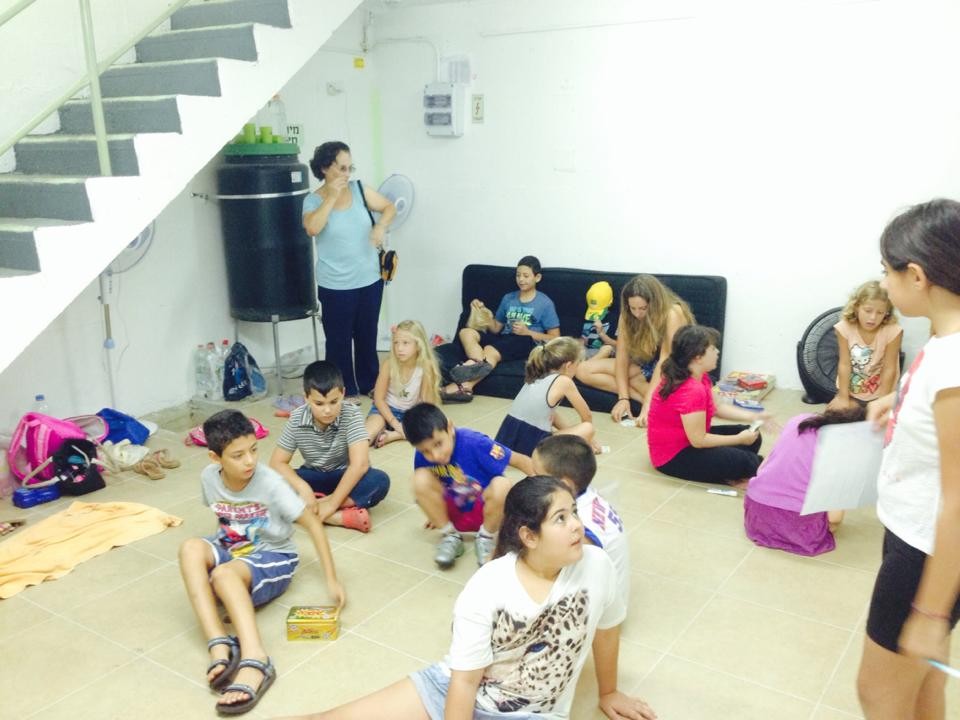 Our routine was turned upside down on July 8. The situation had been escalating for a few weeks, since the kidnapping of the three teens who were murdered, but it blew up in our face on the 8th. On the 9th, the rockets reached Yoav and for a while there we were running to the Shelters up to four times a day. Although I have to say - and I know it sounds strange - it has been relatively quiet. Ever since the troops entered Gaza on the ground it has been even quieter. Today, there was a siren at 6:45 a.m. I ran out of bed to the kids rooms to wake them up. We have 45 seconds to run downstairs to the shelter. My youngest one (8 years old) was wobbly from sleep and I tried to hold him up as we ran down the stairs into the concrete room, close the leaded door and wait. No explosions this time.

I am not going to tell you about the war - formerly known as Operation Protective Edge. It is awful. The number of Israeli soldiers who have died, the damage, the quiet of the usually noisy Israeli street and sullen faces, the devastation and death in the Gaza Strip, the cruelty of the Hamas - I don't have anything to add that hasn't yet been said. I can tell you that no adult smiles much these days.

On July 8 normal stopped. I had to explain to my kids what the sirens mean and that there will be no more camp or any other activity until further notice. I had to explain to my kids what to do if the siren goes off while they are outside (which did not happen often the first week) - lie on the ground face down and put your hands over your head. My 12 year old was playing basketball with his friends when the first siren went off. The one we weren't expecting. They ran to the far wall and took cover as four Iron Dome Missile interceptions exploded above their heads.

Our lives have a radius now and its length is 45 seconds from shelter.

It is difficult to explain what it feels like when you tell your 8-year-old that he can go invite his friend from across the street to come over and play and as he finishes crossing the street, a siren goes off and you watch him turn back to you, his face panicked, and start running and you run to him and you pray that a car won't kill us both because he is running without looking around and I have to get to him and I grab him and we run inside to the shelter.

And in all this you keep thinking - how do I help them grow up to be loving human beings? Not to hate because they are scared, not to generalize? In this reality how do we help them stay kind and humane and believe in the inherent good of people? How do I teach them to look at the destruction of Gaza and be sad?

But most days are just days. The community has organized respite activities for the kids for four hours a day in shelters and kids play and argue and get on each other’s’ nerves because they  are in each other’s faces most of the time. Most days when I come to pick them up around noon, they will be playing soccer with their friend in or near the communal shelter. They had fun on the respite days that the Jewish Agency provided with the help of JFNA and other organizations. They went to water parks in the north and museums and had fun. We even dared go to the pool one day after we noticed fewer rockets were being fired in our direction (you get there and look around and decide together the best strategy if the sirens go off - thankfully they didn't).

I work mostly from home because the kids are home and my husband can't be here. My parents help out when they can so that I can keep some of my meetings. Concentrating on work is not easy, but it is important because this is just temporary. We will get over this and it will get better and we will find a way to make it better both for us and for the Palestinians. I truly believe that and that is why working is important, because life doesn't stop and we need to look ahead and plan for the future and know that a better one is in our hands to build.