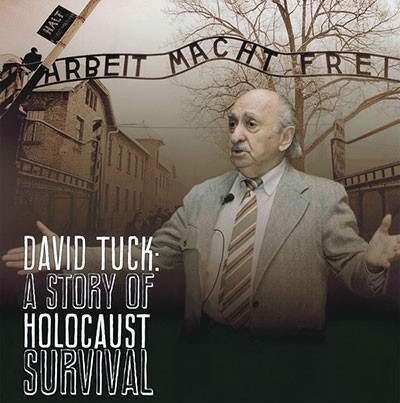 The community is invited to hear first-hand the stories of a Holocaust survivor as ArtsQuest welcomes David Tuck to speak at the Frank Banko Alehouse Cinemas at the ArtsQuest Center at SteelStacks. The presentation and Q&A will be followed by a screening of "Who Will Write Our History."

The Holocaust Resource Center of the Jewish Federation of the Lehigh Valley is proud to support this program. Reserved tickets are free, but must be requested in advance by contacting the Federation at 610-821-5500 or mailbox@jflv.org or the ArtsQuest Center Box Office at 610-332-3378.

Born in Poland, David Tuck’s life change drastically when as a 10-year-old boy his country was invaded by Germany during World War II. By December of that year, he was forced to wear an armband and then a yellow Star of David. Within a few weeks, Tuck’s family was deported to the Lodz ghetto, and in spring 1941 Tuck was deported to Posen, a Labor Camp in Poland.

Arriving in Auschwitz in August of 1943, Tuck was then taken to a sub-camp called Eintrachthütte, and in January 1945 he was transported by train to Mauthausen, Austria during a brutal 370-mile trip over four days. He ultimately ended up in Güsen II, an underground factory, where he helped build German aircrafts.

On May 5, 1945 Tuck and his fellow Güsen II prisoners were liberated by the Americans. At the time, he weighed 78 pounds and it took him several months to recuperate from the horrific ordeal. Tuck then immigrated to the United States in 1950.

Following Mr. Tuck’s presentation, ArtsQuest will screen “Who Will Write Our History,” based on Samuel D. Kassow’s book about historian Emanuel Ringelblum, who gathered a secret band of journalists, scholars and artists imprisoned in the Warsaw Ghetto to collect and record the story of the war from the Jewish point of view. Known by the code name Oyneg Shabes, their goal was to defy their murderous enemy with the ultimate weapon – the truth.

Sponsor: Holocaust Resource Center of the Jewish Federation of the Lehigh Valley