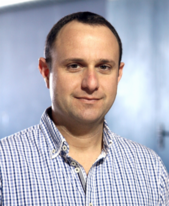 Eran Singer, a correspondent for the Israeli Public Radio station "Reshet Bet" who reports on issues about the Arab world, will offer an insider's perspective on the Palestinian mindset and the current situation in Israel.

In his high school years, Mr. Singer was attracted to the study of Arab affairs and concentrated his education in that area. Subsequently, during his military service, he was drafted into the Israeli intelligence unit, where his education, fluency in Arabic, and expertise in Arab religion, culture, and politics were put to use.

After his military service, Mr. Singer worked in Israeli broadcasting, reporting on domestic Arab affairs, later becoming a news editor for Kol Israel in Jerusalem. When the Second Lebanon War broke out, he returned to Haifa and began reporting on all issues related to the neighboring Arab world.

His understanding of the Arab mentality and culture makes him a desirable participant in think tanks and a valuable advisor to Israeli political and security authorities.

Sponsored by the Community Relations Council of the Jewish Federation of the Lehigh Valley and Congregation Sons of Israel. Brunch will be provided. Free and open to the community.