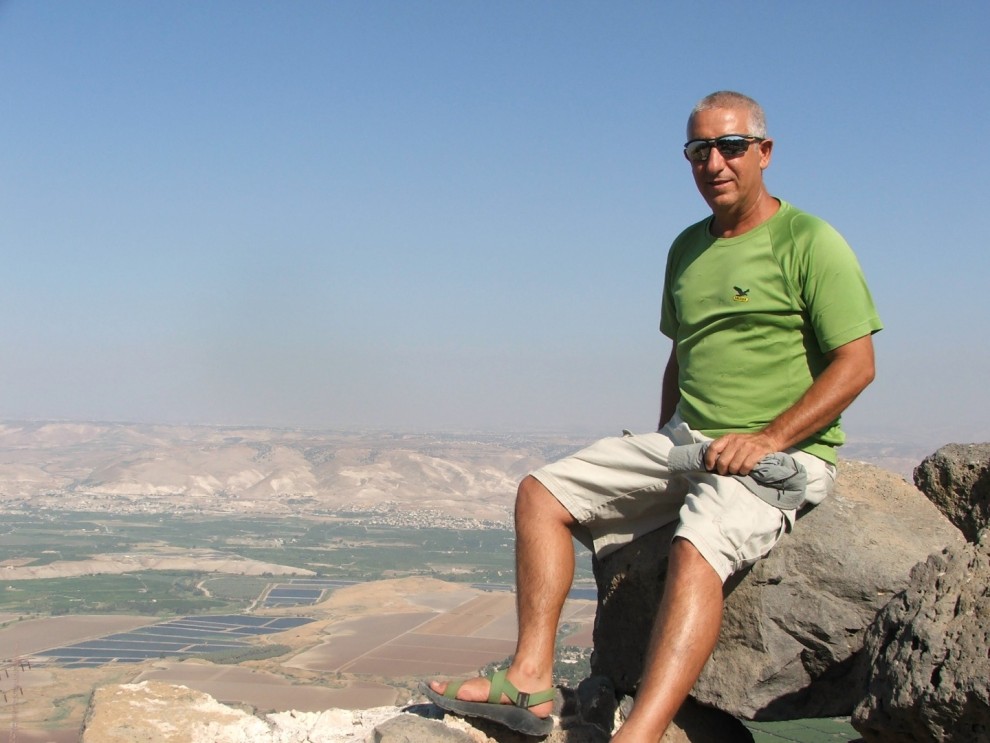 By Alan Salinger
Special to HAKOL

This summer we visited Israel to share in the wedding of Jeremy Vaida and Meidan Keidar. You may know Jeremy as David Vaida and Cantor Ellen Sussman’s son and Meidan as the former shlicha who spent time promoting Israel’s and Yoav’s relationship with the Lehigh Valley, visiting synagogues and Jewish youth groups. It was a joyful wedding celebrated in Haifa followed by a week’s tour with about 20 guests. The guide was terrific and the tour stops interesting.

For me personally and for my family, the trip was more than a trip abroad, since I have a long standing relationship with Israel, having resided there for two years. Our family were also early participants in the Yoav region’s partnership with the Jewish Federation of the Lehigh Valley. The trip was an opportunity to travel to Yoav and visit and spend time with young men who stayed with us and their families. Having housed two teens for the summer in 2003, visited Yoav as Volunteers in 2004, and housed summer supervisors several times, we had developed relationships, which have continued over the years with holiday calls, birthday cards and other celebrations.

We arrived in Yoav from Tel Aviv at the end of our tour in mid August. Liron Tamari, who stayed with us in 2003, met us in Tel Aviv and guided us to Yoav where we were hosted by his parents and dined with his brothers, sister and their families. The Tamaris, David and Ruthi, hosted our visit at Kibbutz Beit Guvrin, home of the Maresha caves, a World Heritage site. Beit Guvrin is one of the several kibbutzim and moshavim that make up the Yoav region located southwest of Tel Aviv and southeast of Jerusalem, and includes the site where David slew Goliath. The kibbutz offers a beautiful setting of nice homes on a well-groomed site, with well-maintained resident facilities such as a pool and a child care center. The kibbutz is engaged in agriculture as well as manufacturing.

My wife Mary and son Steven stayed for a very active five days. We were struck by how the area had grown and changed. With Yoav committee member (and licensed guide) Lior Levi we visited sites such as the Park Britannia, whose caves date back to the Bar Koch Bar revolt in the first century CE, and we shopped in Kiryat Gat, the area’s largest big city and Israel’s home to Intel, which has a sizable presence there. Steven went to the Dead Sea, Masada and on a camel ride, leaving Beit Guvrin early in the morning to avoid the heat. Before Steven and Mary left, we were hosted by Yiftach Parizada’s family with a wonderful dinner. Yiftach also stayed with us in the first Yoav group, and we had shared time with his family at the beach on our earlier visit.

Though Mary and Steven left, I was never alone. Our Yoav partners made sure I was comfortable and busy. David and Ruthi were so gracious in every way. Ruthi, a teacher, endured my less-than-perfect Hebrew, offering me opportunities to speak and gently correcting me. Lior Levi graciously accommodated my need to see interesting, but lesser-known sites by traveling with me on several trips to the south including Be’er Sheba, Ein Avdat, (a desert National Park) and the Mitzpah Rimon Crater. In the north we visited Bet Shaen, Nazareth and several other sites including Kibbutz Ramat David where I spent six months in 1972. We spent time in Jerusalem as well, visiting and finding viewpoints only a guide would know. Lior wanted to show and explain everything, and made great effort to do it. I would be remiss if I did not mention how giving Lior’s family had been to me, Mary and Steven.

Cynthia Wroclawski, the chair of the Yoav-Partnership2Gether committee, offered me two unique opportunities. First, was an evening bicycle ride around her kibbutz, Revadim. It was the first time that I had ever ridden a bike at night. A full moon, about 30 bicyclists with lights and blinkers and fellowship, provided ample vision through the fields of Revadim. It was an interesting ride, followed by beer and humus. It is something that I will never forget, and would look forward to doing again. I should note the good conversation and warm hospitality offered by Cynthia and her family.

The second opportunity was spending time with Cynthia at Yad Vashem where she works, finding the names of my grandparents’ brothers and sisters who died in the Holocaust. Additionally, it provided a view of the new Yad Vashem exhibit and its remarkable presentation.

I spent a nice afternoon with Nurit Grossman of Kibbutz Golan, who was one of the originators of the Partnership. We had lunch at her home with her husband Yudka, and then we traveled to Ashkelon the large seaside city not far away. It was interesting to see how this attractive city had grown. We visited the seaside park and nearby neighborhoods. Its is also the home of a wonderful seaside National Park with a beach and extensive ruins featuring a Canaan Gate dating to 1590 BCE. Nurit and I visited Etti Cohen and her family at her moshav home. Etti is known for her cooking and hospitality, and this visit was no exception. One of Etti’s daughters was in the first group of Yoavi’s to come to Allentown, and Etti visited several years ago.

The time spent in Yoav was a wonderful experience and a great way to start my retirement. Our Yoav partners were great hosts who wanted us to see and do everything. The conversations and experiences enhanced my understanding and thinking about Yoav and Israel. This trip is also a spring board to planning our next visit.