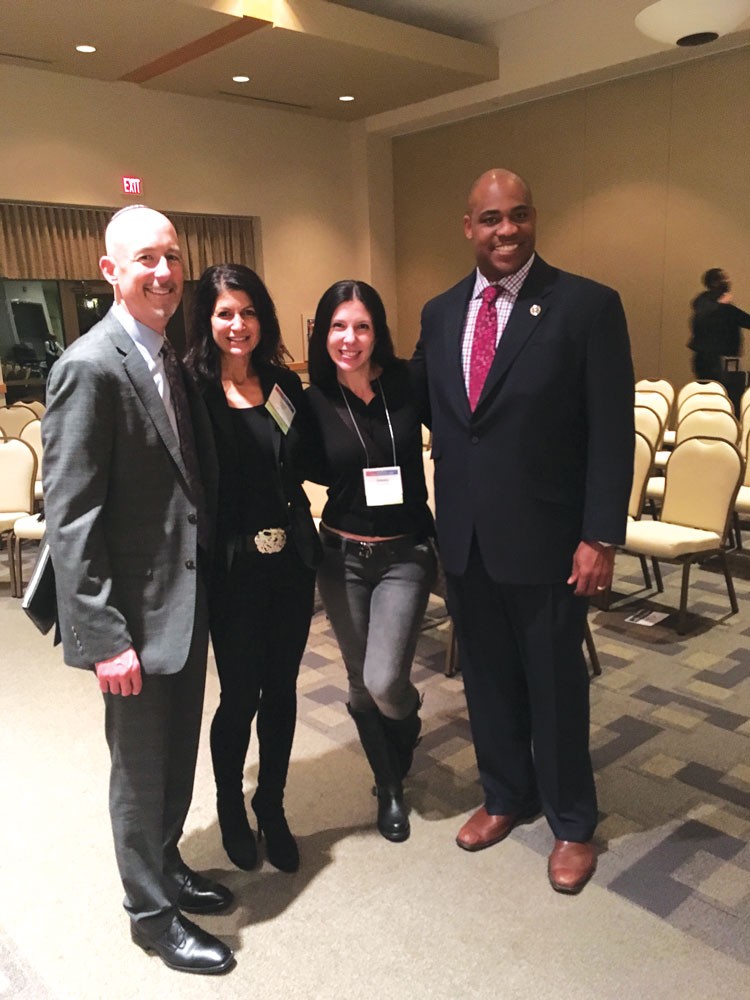 The American Israel Public Affairs Committee (AIPAC) held a special event at Temple Beth El in Allentown on Dec. 5, 2017. The gathering was organized as a means to promote pro-Israel activism in the Lehigh Valley and to encourage attendance at the upcoming AIPAC Policy Conference in Washington, D.C.  The Policy Conference is an annual assembly of close to 20,000 pro-Israel Americans from all 50 states, as well as lawmakers from both parties and foreign dignitaries from Israel and around the world, and it will take place this upcoming March 4-6.

Speaking at the Lehigh Valley event was Mark Dubowitz, CEO of the Foundation for Defense of Democracies (FDD), and Anton Gunn, former South Carolina state representative and advisor to President Obama. Dubowitz, who had just returned from a trip to Saudi Arabia, discussed Saudi efforts to counter terrorism and counteract the growing influence of Iran in the Middle East. Gunn followed Dubowitz and shared a personal account of the loss of his brother, who was killed in the U.S.S. Cole bombing in Yemen on October 12, 2000. Gunn chose to devote his life to public service and became the first African-American elected to the South Carolina House of Representatives from District 79. Gunn participated in an educational seminar in Israel last year and has since spent time touring the United States speaking in support of the U.S.-Israel relationship.

The event began with comments from Robby and Laurie Wax, who have attended the AIPAC Policy Conference for the last four years. Robby spoke about their efforts, together with assistance from other Wax Fellows and local AIPAC members, to promote the conference and to expand the pro-Israel community in the Lehigh Valley. Laurie added that there is a real sense of solidarity at the conference and remarked that the only time she had ever had the same warm feeling of belonging prior to the AIPAC conference was walking the historic streets of Jerusalem. She urged community members to join them at this year’s event, where thousands of people from all backgrounds will come together in common support for the U.S.-Israel alliance.

The Dec. 5 event reminded community delegates of an important fact: At a time when bipartisan cooperation appears impossible on any other issue, both parties routinely come together on the U.S.-Israel partnership. For AIPAC activists across the country, that enduring bipartisan support is of paramount importance. They feel strongly that Americans have a vital role to play in keeping Israel safe. They know that Israel, the one and only Jewish state, helps the United States in innumerable ways. And they are proud to devote their time and energy to ensuring Israel remains the vibrant beacon of democracy and stability in a region that sorely lacks both.

The AIPAC Policy Conference is the largest gathering of America's pro-Israel community. Through demonstrations of groundbreaking Israeli innovations, keynote speeches by American and Israeli leaders, inspiring moments on stage and intimate educational sessions, Policy Conference delegates experience the full scale of pro-Israel activism in three powerful days. The conference culminates with the opportunity for delegates to lobby their members of Congress in support of legislation that enhances the relationship between the United States and Israel. It is AIPAC's citizen activists who educate decision-makers about the bonds that unite the United States and Israel and how it is in America's best interest to help ensure that Israel is safe, strong and secure.

We need more people from the Lehigh Valley to join us. As Americans who care about Israel, it is our obligation to lead and make our voices heard in Washington. The Jewish Federation of Lehigh Valley is currently building a delegation and has discounted registrations available. Call 610-821-5500 or CLICK HERE for more information.