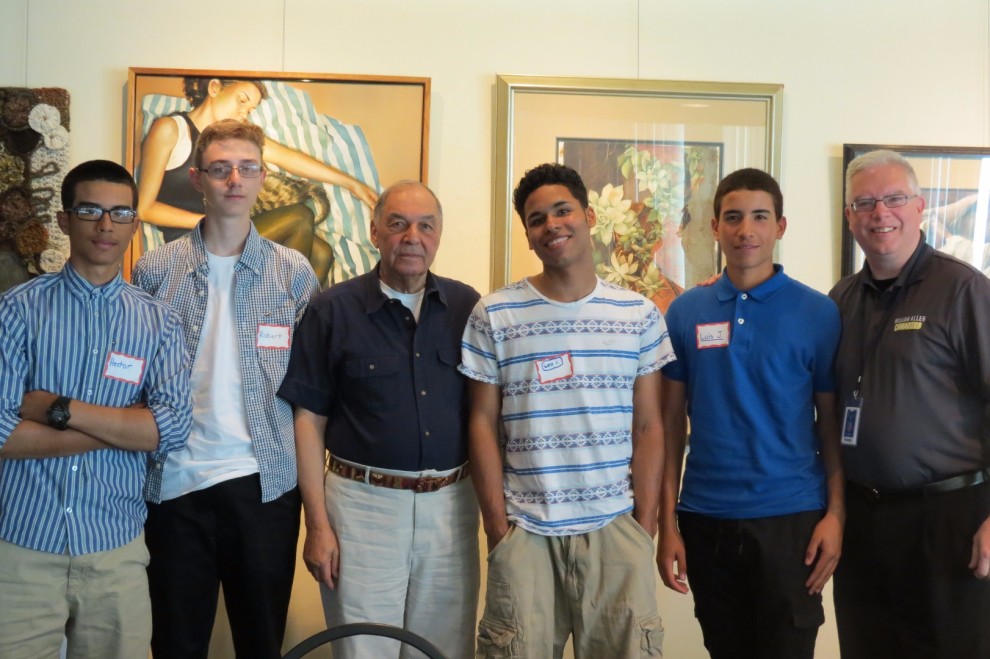 William Allen High School students Adalgeovany Caceres, Luis E. Justo, Hector Nunez and Robert Borowski listened intently as Edward Posner talked about his childhood. As the students took notes and recorded the conversation, Posner described what it was like in the ghetto of Shanghai during World War II, how he acclimated to life in the United States and his experience on a kibbutz in the 1970s.

This conversation was just one part of a project that has been years in the making. After receiving a grant from the Allentown School District Foundation, William Allen history teachers Jeff Dutt and Matt Rohrbach have been working with their students to compile an oral history of the Holocaust in the form of interviews with area survivors. They have been assisted in this effort by the Jewish Federation’s Holocaust Resource Center, and the recordings will be donated to the center upon completion, along with the Holocaust Museum in Washington, D.C.

Dutt and Rohrbach became inspired after working with Shari Spark, Holocaust Resource Center coordinator, to bring Holocaust education to their classroom in the form of speakers and artifacts.

In January, students began preparing for the interviews, learning about not only the history of the Holocaust, but also how to go about compiling an oral history.

The students had help in creating their questions from Ashley Sastak, who previously worked as a researcher in the Oral History Department at the Holocaust Museum in Washington. Sastak jumped on board when she was contacted by Spark, and she has been impressed by the students’ commitment to the project and the thoughtfulness of their questions.

Although they have been teaching the Holocaust for many years, Dutt and Rohrbach are still learning new things. Before interviewing survivors, “I felt like I knew a lot,” Dutt said. “I’d taught about the Holocaust for years and I’ve even been to concentration camps in Austria and Germany, but I haven’t even scratched the surface.”

Their students echoed this sentiment. “It was so much more widespread than I realized,” Borowski said. Fellow student Caceres agreed, saying he was surprised to learn that Jews in Shanghai like Posner were terrorized and discriminated against.

Their teachers are pleased with the direction of the project. “It’s amazing to me what questions they ask and what they want to know,” Dutt said. “They’ve really blossomed.”