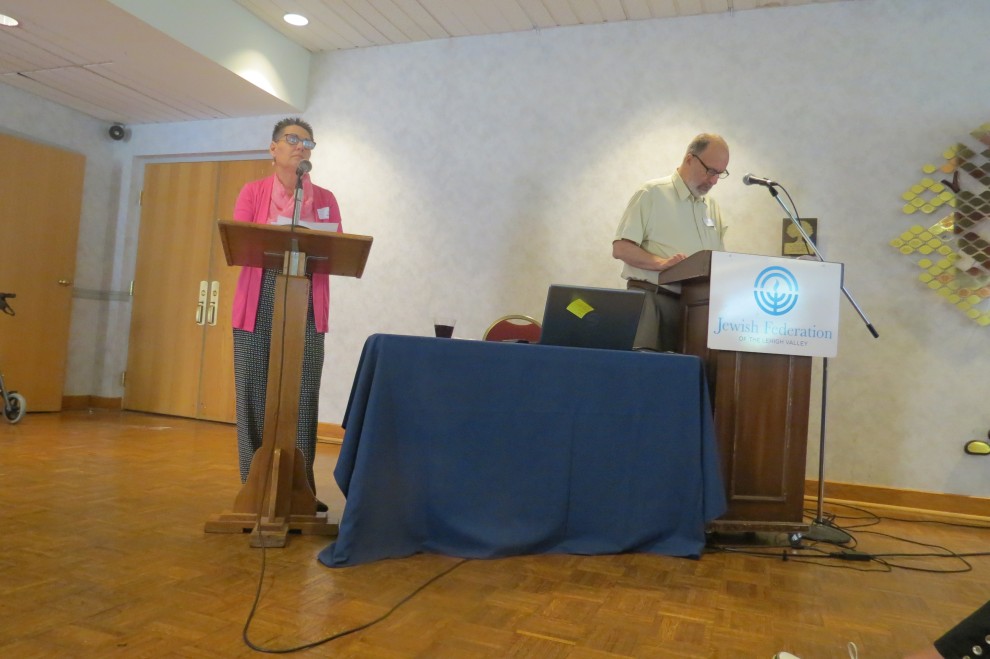 Editor’s Note: A recent trip to Germany to lay stones at the site of Ruth Hamburger’s childhood home led her son Henry Luftman and his wife Pat down a path of rediscovery. The Allentown couple shared what they found and what they experienced at a Jewish Federation Lunch & Learn on May 4.

Standing at side-by-side podiums, Henry and Pat took turns reading letter after letter. Letters from a “mutti” and a “papa” to their only child – Ruth. A child who they would never see again.

Ruth Hamburger and her parents and grandparents were deported from their home town of Malsch, Germany, on Oct. 22, 1940, and sent to Camp de Gurs in in southern France, close to the Spanish border. The camp was comprised of 380 cabins separated by fences with no windows, insulation or running water, sacks of straw for beds and typhoid fever and dysentery common.

With the help of an international group including American Quakers, Henry’s mother, with her parents’ approval, was moved in January 1941 at the age of 11 to a children’s home in nearby Osprey.

Over 17 months, Ruth’s parents sent her 68 letters, all of which she kept. The letters have been recently rediscovered by her children and translated from their native German by Henry’s brother.

March 1941: “My dear Ruth … I am very glad that you like it there and that you have such a nice little bed. I am almost jealous of how nice it is for you and that you don’t have to wade through the muck here anymore …”

September 1941: “Now dear Ruth, for the New Year, I wish you all the best as only a mother can wish her dear child. Stay well and good and then everything will be well and the good God will lead us all back together again …”

August 1942: “Dear Ruth, I was very glad to hear that you are well in your last letter. You need not worry if you don’t get any mail for a while. Stay healthy and good. Warmest greetings and countless kisses from your Mutti.”

After their last letter in August 1942, Flora and Heinrich Hamburger were sent from the internment camp to Auschwitz where they were murdered. Her grandparents, Justine and Isak Hilb, died earlier at Camp de Gurs.

With the help of an aunt after the war, Ruth made her way to America in 1947, at the age of 17, and continues to live in Massachusetts. She married her husband Alvin in 1951 and had three sons.

This winter, Ruth and her family were invited back to Malsch for a ceremony to install “stolpersteines” at the site of the family’s former home. These memorial stones – which literally translate to “stumbling blocks”– are part of a project that has spread throughout Germany and surrounding countries. There are currently 60,000 “stolpersteines” placed at the “last residence of choice” of those deported during the Holocaust.

While Ruth was unable to make the trip, her sons were in attendance. They were celebrated upon arrival and treated as honored guests by the townspeople, none of whom are Jewish.

As the stones were installed – one for each of the five household members – a local high school student read a biography of the family and local school children, all 10 years old – the same age as Ruth when her family was deported – quietly sang Jewish songs.

“My mother-in-law is among the happiest people that I’ve ever met in my life,” Pat said near the conclusion of her presentation. “She giggles a lot, she doesn’t talk about the past a lot and I rarely hear her say a bad word about anyone. What I realized on this trip was – particularly for me as I am a Jew by choice … our lives all take different paths depending on the turns we take.”

“If my mother-in-law had not chosen hope over despair because of what happened to her, I would not be standing with you today because this gentleman would not exist,” she said, gesturing to her husband. “My son, who is with us today, would not exist. My daughter, who we adopted from China, would be living with a different family, perhaps in a different country. So the ripples that come from one person’s experience go out in many, many, many different directions and touch many, many lives. I owe my mother-in-law the life that I have today and I salute her.”