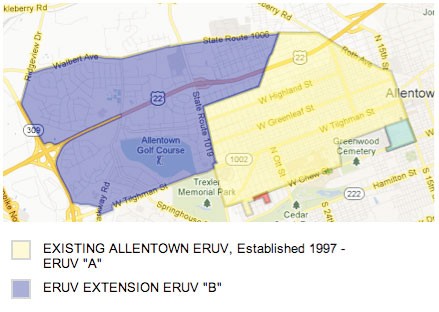 Often, as I stand quietly staring at random telephone poles alongside Tilghman Street, Cedar Crest Boulevard and Walbert Avenue, for no apparent reason and for lengthy periods of time, onlookers will stop to ask me what I’m doing.

“Allow me to explain,” I answer. “My name is David Wilensky, Rabbi at Congregation Sons of Israel on Tilghman Street here in Allentown. Our community has many Sabbath-observant members who do not perform acts of labor on the Sabbath. Included in these acts of labor is the carrying of items from inside one’s home to another location outside the home. In order for our Sabbath observant families to be able to push strollers or carry personal belongings outside of their homes, we need to turn Allentown into one large family. The way we do this is by constructing a string that surrounds the entirety of the city, uniting us as one family celebrating the Sabbath. Our community is growing and we need to expand the string westward to Route 309.”

I cannot begin to recount the number of times those words rolled off my lips over these last four years, and now I am pleased to say that with God’s help, the expansion is complete.

Over the years that the expansion took to finish, many congregants and members of our broader Jewish community would stop and say, “Rabbi, are you all right? Can I give you a lift?” There were onlookers who were unsatisfied with my brief explanation, and probed deeper into this peculiar religious phenomenon that seemed to tickle their interests.

“So, are you actually affixing your wire on these very telephone poles?”

By this point, most of the onlookers were either more than satisfied or overly confused, and went on their way either curious to learn more or just as confused as before they had asked.

However, even this more involved answer did not suffice for Allentown Mayor Ed Pawlowski.

“Doesn’t it seem like a loophole getting around a religious prohibition?” he asked.

“Now it’s getting serious! It’s time to reveal the fundamental Talmudic reasoning that truly explains the eruv,” I thought.

“Well, Mayor, the rationale is as follows. Biblically, a Jew is prohibited from carrying only from inside their home (a private domain) to an authentic ‘public domain’ (reshut harabim).  In order for any area to be considered an authentic public domain it must fit certain Talmudic criteria, among which is the need for 600,000 residents to be residing within the city. Since Allentown does not have that number of residents, our city is not a genuine ‘public domain,’ and thus carrying from one’s home to the street is Biblically permitted. However, our rabbis were concerned that if people who live in a place like Allentown would in fact be allowed to carry outside their homes on Shabbat, they would unwittingly do so in a bona fide ‘public domain’ as well, such as Manhattan. (The construction of the Eruv in places like Manhattan is beyond the scope of this article). Therefore, our rabbis prohibited us from carrying even in places such as Allentown. However, since the prohibition of carrying in Allentown is only Rabbinic in nature, the rabbis relaxed their stringency provided that a nominal edifice known as the eruv be constructed.”
With this more-detailed explanation, the mayor was satisfied.

There were a great number of individuals involved in this project, many of whom helped me get through the so-called “red tape,” and without whom this four-year project could never have taken place.  I would like to thank Mayor Ed Pawlowski, Allentown Solicitor Susan Wild, State Sen. Pat Browne, PP&L, Verizon Pole and Conduit Administration, Sunoco Logistics, GC Electric, Jewish Federation past president Barry Halper and our Allentown eruv halachik overseer Rabbi Chaim Jachter. I would also like to thank my esteemed colleague Rabbi Yaakov Halperin, whose advice and help greatly aided this cause. I would like most notably to thank the people who make the eruv a reality each and every Shabbat – our eruv checkers; Rabbi Yehoshua Mizrachi, Ira Robbins, Mark Notis and especially our eruv president Jonathan Powers. We look forward to welcoming our new checkers, David Bach and Kevin Danna, and wish them great success in joining the team.

As many know, eruvs can often lead to political struggles within the Jewish community. I am so proud to be part of a community where this endeavor was greatly supported and encouraged by all of the Lehigh Valley clergy – a true embodiment of Hinei mah tov u’ma naim shevet achim gam yachad; how beautiful and sweet it is when brothers dwell together.

May our Lehigh Valley Jewish community continue to grow and may our observance of the holiest day of the week – the Sabbath – continue to refresh and strengthen our ever-growing spiritual lives.