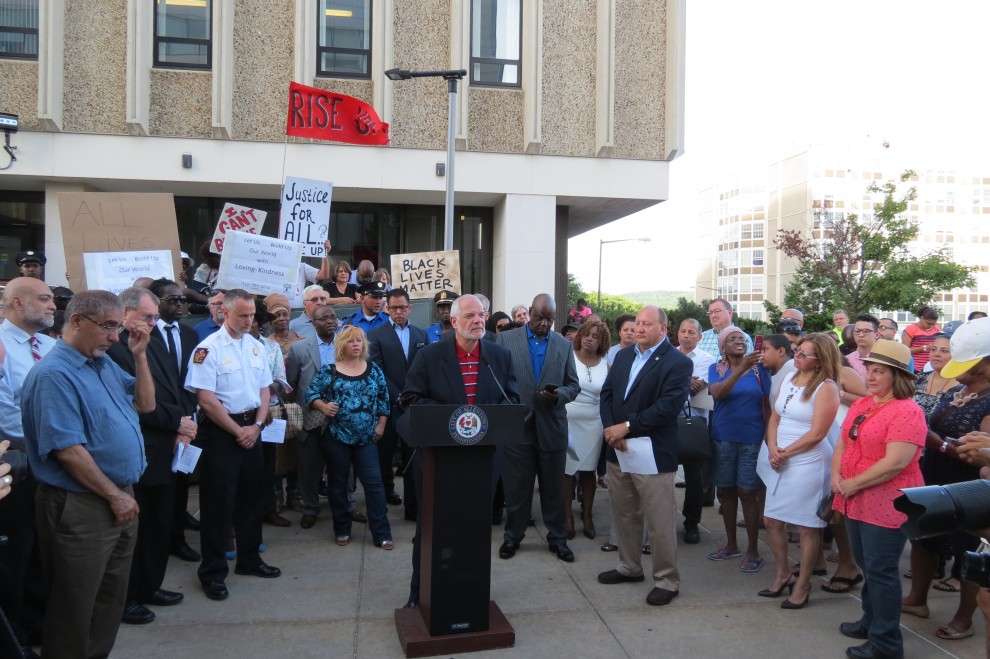 On the evening of Monday, July 11, the city of Allentown came together as part of a top-down effort organized by the city to show solidarity and support for the people affected by recent tragedies across the country.

Aaron Gorodzinsky, director of outreach and community relations for the Jewish Federation of the Lehigh Valley who attended the event, stressed that the “most important thing is that the city of Allentown, a number of civic and religious leaders and the police force recognized that people in the city were feeling a sense of despair for what happened.”

“They wanted to show that the city was prepared to make changes to ensure that the tragedies that happened across the country don’t take place here,” he said.

The Allentown United effort was unusual because it was “proactive rather than reactive,” according to Cantor Kevin Wartell of Temple Beth El. Wartell saw his involvement, which included singing “America the Beautiful” and Marvin Gaye’s “What’s Going On” at the event, as “an outgrowth of responsibility” for leaders in the city. To keep Allentown as the “special place built on tolerance and understanding” he sees, Wartell and other leaders organized this event from the top down, which differentiates it from the many community-led protests across the country.

Wartell was joined by Muslim and Christian leaders as well as Allentown’s mayor and police chief in addressing potential solutions to this country’s problems. The religious groups also banded together to write a statement entitled “Affirming the Sacredness of Life and Justice” that emphasized the importance of the city’s leadership in bringing the community together.

“As community leaders,” the statement reads, “we will use our platforms to heal and unite, talk and listen, see and hear each other during this moment in our country that requires profound introspection and dialogue. We will join together online, in our neighborhoods, in your houses of worship, around our kitchen tables and proclaim that violence has to stop, it is not who we are, we will not be pulled apart.”

To this effect, the event was organized not only to show solidarity but also to “announce a number of steps that the city and the police are about to undertake to prevent” future tragedies, Gorodzinsky said. Among the mentioned plans was the involvement of a council of lay leaders in the police hiring process as well as a sensitization and training process for police officers.

“We applaud the city for bringing together such a diverse group to work together and make the city a better place,” Gorodzinsky said.