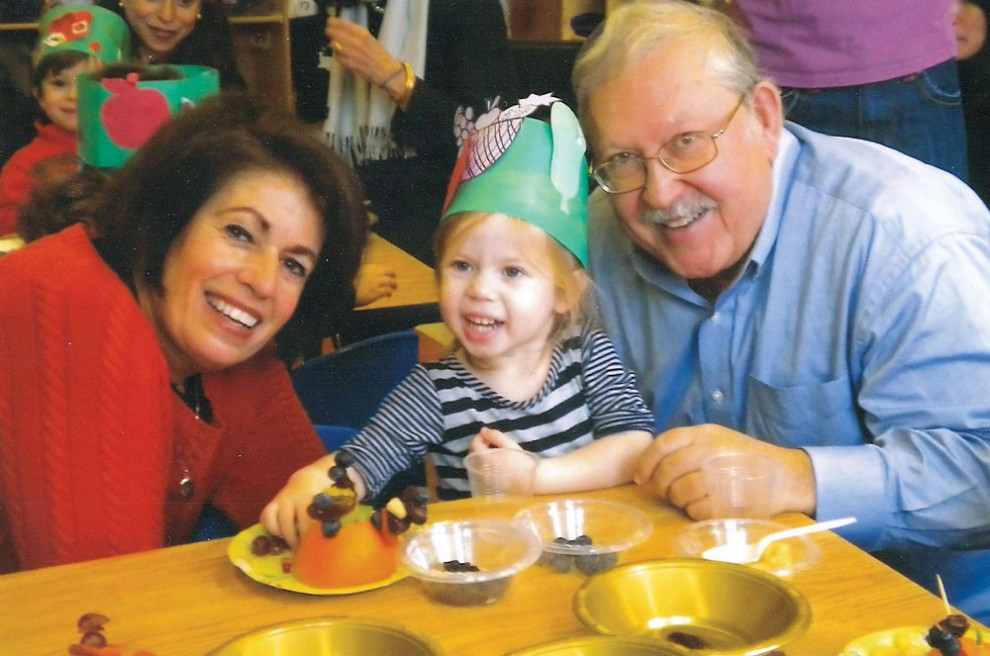 Editor's Note: Rabbi Juda will be honored with the Lifetime Achievement Award at the Jewish Federation's Annual Meeting on Thursday, June 12, at 6:30 p.m. at the JCC of Allentown. Free and open to the community.

The house in Fall River, Massachusetts, in which Rabbi Allen Juda grew up and which still belongs to the family may not be what it once was to him, but the life he had there and the synagogue in which he grew up exerted a profound influence on him. Juda and wife Toby made a home of their own, raised three children and built community in Bethlehem. Now, after nearly 39  years as rabbi of Congregation Brith Sholom, he is set to retire at the end of June.

One of the most influential events in Juda’s life happened years before he came into the world: “My father was born in Kirch Goens, Germany,” Juda said in a recent interview. “His parents were taken in September 1942 to Theresienstadt where they somehow survived the war. My mother was born in Vienna, Austria, and left in September 1939.” However, all the men on that ship, including Juda’s grandfather, were taken off by a French submarine looking for spies and it was some time before the family was reunited.

“A great many uncles and aunts and their children were murdered at Auschwitz,” Juda said. Yet his parents and grandparents were helped by others while still in Europe and at the mercy of the Nazis. He said that at the age of 19, his father on the night of Kristallnacht was taken by a neighbor to Frankfurt to save him from being murdered.

Growing up, Juda was close to all of these survivors; they all lived in or near that Fall River house. He processed the criticism that America did not bomb the rail lines to Auschwitz as a personal and community ethic that he explains this way: “We can’t condemn people for not doing more for Jews if we don’t do something.” But more than Jews, too; he expands the reach of this ethic to any population of the world, Jewish or non-Jewish, that is the target of genocide. He has long engaged in consciousness-raising on the subjects of Rwanda, Darfur and remote Jewish populations.

When the American Association for Ethiopian Jewry announced it would be possible to “buy out” the life of a Jew in Ethiopia for $3,000, Juda said to his congregation, “Let’s see if we can get 100 families to each put up 30 bucks;” they did. He admires people who are “do-ers” and found the Bethlehem community to have many such who were willing to be engaged, when it seemed in general so few were, in helping ”the stranger, the orphan, the widow, the poor.”

He looked beyond Bethlehem to Jewish Family Service and the Jewish Federation of the Lehigh Valley, as well as the group of Jewish clergy that meets monthly. Current chair of the group Cantor Kevin Wartell cites Juda’s love of Jewish life and seeing the world through the prism of Jewish values, but said, “Most of all, it is his friendship that I cherish.”

Asked about his own accomplishments, Juda consistently spoke not of himself individually but of his community. He sees as a major accomplishment what the community did to help three teenage Iranian Jewish girls who were “dropped off on our doorstep.” Brith Sholomers put together “a ton of help” to get the girls through high school and into college. The same was true for a young Russian Jewish man name Boris who somehow arrived in the area; the congregation “helped him get him into Lehigh and testified so he could get asylum; everyone helped him create a whole new life.”

Brith Sholom President Judith Rodwin gives Juda more credit than he gives himself: "In the 15 years I've been a member of Brith Sholom,” she said, “I've observed the subtle ways Rabbi Juda has shepherded our community.  He's well-known for his sometimes biting quips and rabid baseball fervor but all that just deflects attention from the generous and timely wisdom and aid he has brought to so many."

Juda compares the match between a rabbi and a synagogue to a marriage and in that sense something resonated between his upbringing and the people he found in Bethlehem. His highest praise is reserved for people who are “for community.” The community in which he grew up included Rabbi Samuel Ruderman and Rabbi George Pollock, both of whom he said showed him the best of what a rabbi could be. They also presented him with opportunities to gain knowledge and channeled him into Camp Ramah, where he started as a camper and eventually became an assistant division head as he was entering his senior year of college and, later, a division head and assistant to the director.

In 1971, Juda earned a bachelor’s degree in Hebrew literature at the Jewish Theological Seminary and, in a joint program, a bachelor of arts at Columbia University. Along the way, he spent one year at Hebrew University learning Hebrew language and Judaic subjects.

Even before Juda was ordained in 1975, he had his initial interview with Bruce Smackey and another representative of Brith Sholom while riding in the back seat of Smackey’s car as he drove to Long Island to visit a relative. Two weeks after Juda became rabbi at Brith Sholom, he married his wife Toby. They had a three-day honeymoon and came back for Rosh Hashanah, which that year coincided with Labor Day weekend.

“I was inexperienced in every respect,” Juda recalled. However, he was also much-needed in Bethlehem, where he had come to “a rather amazing building that was old; four stories, a Synagogue-Center in the Kaplanian model. It was a United Way agency, primarily of interest for the pool and gymnasium, with some integration with the general community” and close to the campus of Lehigh University. He claims only to have “provided what a community always needs: guidance, direction, an honest appraisal.”

The problem, Juda found, was mainly that the building was in the wrong place. It was also aging and expensive to run. Yet the people who grew up in Bethlehem were “super-attached” to the building, which had “not one parking space” at a time when Lehigh University was filling the streets with cars.

Bethlehem native Jerry Hausman recalled that the rabbi said, “Jerry, if we don’t do something, we could die here.” Instead, Jerry made a phone call to a connection at Lehigh and Juda got up and gave a Yom Kippur sermon that opened the eyes of many to the need to move to the north side of town.

There, in addition, to the new synagogue, Juda got involved with Beth Tikvah, working with a team of dedicated people to develop a Jewish wing there. He credits his grandmother’s involvement in the Golden Age Club with instilling in him the importance of a vibrant life for older adults. Under the influence of congregant Betty Lehrich, he and other members of the Brith Sholom community regularly visited Jewish residents of the state hospital.

Juda also finds it important to engage with non-Jews and participates in the Institute for Jewish-Christian Understanding. He became chair of the Day of Dialogue Committee and looks to continue this work during retirement.

Perhaps not unlike his Jewish and non-Jewish counterparts, Juda is troubled by what he sees as a deterioration of religious life; as seen in this case in fewer people attending services on the lesser known holidays, the struggle to make a daily minyan – “that we are down to two days a week is a loss,” he said – and many more discouraging indicators that he has described in sermons at Brith Sholom.

Yet there is continuity, too. “I started as a young man [and am] now becoming a senior,” he said. And he speaks admiringly of his wife, who has been at his side through these many years.

“I can still picture her on the High Holidays,” he said of Toby as she and the congregation sat listening to his final Yom Kippur sermon, “a young woman in her early 20s, sitting in the first row, the first seat in the east balcony on the south side. That was the so-called ‘Rebbetzin’s seat.’ Everyone had to know where to find her. Toby handled that and much, much more with grace and class. She filled the gaps of time and presence with our children -- Adam, Aaron and Tamar -- that this profession required of me.” In addition, she taught in the religious school, functioned as the “kiddush lady” for over a decade, “meaning everything,” and taught various programs.

The two plan to continue living in Bethlehem, which they like and find is in close proximity to their children – and grandchildren. “To hear Kayla doing part of the Ma Nishtana at [the age of] 2 ½ ,” Juda said, “it’s thrilling, really. To hear her doing the Sh’ma is extremely meaningful.”

And, thus, there is a future.