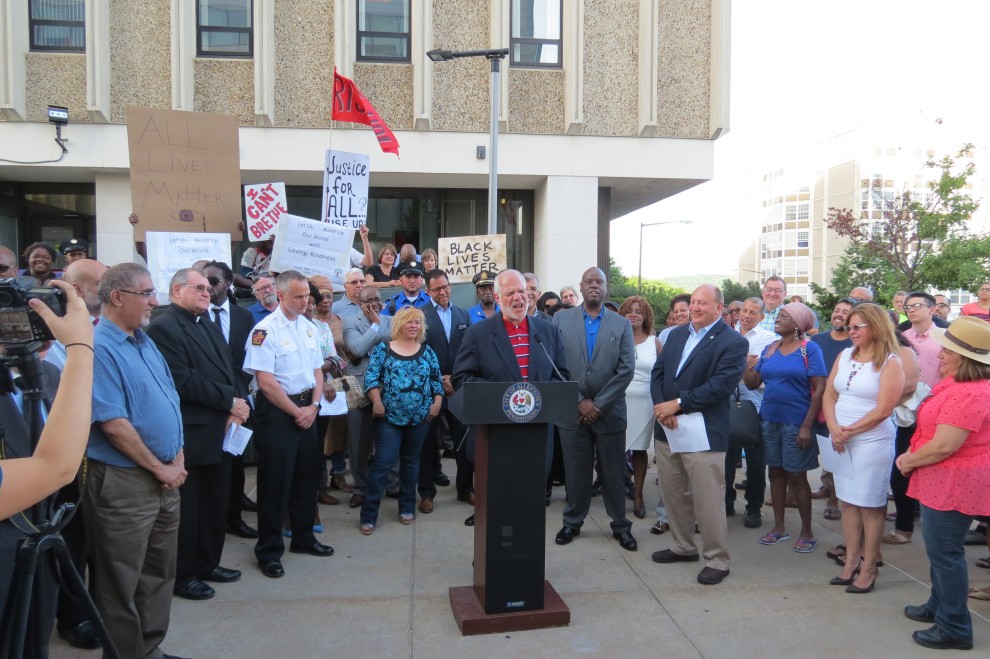 Growing up in Detroit, Cantor Kevin Wartell vividly remembers the time his parents left a private pool because the family’s black maid was not allowed in.

“My parents turned around and said if Fisher can’t go in, we’re not going in either,” said Wartell, who has made the mission of prejudice reduction and tolerance an important part of his life’s work. “That impacted me greatly.”

Wartell, who is closing out his 30-year tenure as cantor and educator at Allentown’s Temple Beth El, will be honored this June with the Schiff Award for Prejudice Reduction. The award will be presented at the Jewish Federation’s Community Celebration & Annual Meeting on June 14. Wartell will again be honored at the Mortimer S. Schiff Memorial Golf Tournament on June 18, which brings people together of all faiths and raises money to support the Federation’s prejudice reduction efforts.

Born in 1956, Wartell’s formative years in Detroit took place at the height of the Civil Rights Movement. As an 11-year-old, he remembers smelling the smoke from the city’s 1967 race riot.

“I have probably, in retrospect, lived my life since a child motivated by the concept of prejudice reduction,” said Wartell, who also enjoys a life-long relationship with The Four Tops, a Motown quartet from Detroit, since a chance meeting with lead singer Levi Stubbs at age 18. “Experiencing the ‘60s and watching people being treated intolerantly has always made my life uncomfortable and I’ve always wanted to change that.”

“As a Jew, I’ve always felt like an underdog as well,” he continued. “And now that I think the Jewish community has been accepted more in the mainstream, I think it’s our responsibly to help those who are not yet accepted and that’s really my passion – bringing groups together to dialogue and to respect each other’s differences.”

On Sept. 11, 2015 – his birthday – he did just that. It was the first time he had the opportunity to host his Friday morning radio show – Kol HaEmek – on an anniversary of the terrorist attacks.

“I decided that I wanted to do a radio show that exemplified how our faith communities do get along in the Lehigh Valley despite what happened in 2001 and I wanted to do that by having different faith leaders come on the air and share that experience with the listeners,” he said.

Instead of sending an email or making a phone call to ask the Muslim community to participate, “I literally went and knocked on their door and introduced myself,” he said.

Rabbi Moshe Re’em of Temple Beth El noted that radio show as just one of the many examples of the times Wartell has “raised his voice in a multicultural, interfaith chorus aimed at improving the society and the community in which we live.”

“Through his music, Kol HaEmek radio show, interfaith work both within the walls of our synagogue and in the broader community and youth work at Temple Beth El, prejudice reduction has been an essential part of his cantorate,” Re’em said.

Wartell has been involved in the work of the Institute for Jewish-Christian Understanding at Muhlenberg College since its inception in 1989, said the Rev. Dr. Peter Pettit, the institute’s director. Because of his extensive network, he has become a “go-to individual” to make connections and bring people together.

“Kevin has shown up more regularly and for longer than anyone on the interfaith scene in the Lehigh Valley,” Pettit said. “His personable style is disarming and wins him friends across religious lines long before the issues of religious difference ever begin to emerge.”

In 2016, Cantor Wartell had the opportunity to sing “America the Beautiful” at an interfaith rally in downtown Allentown. His rendition took place amid signs touting “Black Lives Matter” and “Justice for All.” In 2017, he performed with The Four Tops on the song “We All Gotta Stick Together,” and he introduced a speaker from the Muslim community with the traditional Shehecheyanu prayer at an interfaith Thanksgiving service.

“Cantor commits himself to community building. He reaches across boundaries of race, faith and socioeconomics in order to promote dialogue,” said the Rev. Dr. Larry Pickens, ecumenical director for the Lehigh Conference of Churches. “I have found him to be an ardent defender of the human dignity of persons who are often times overlooked and left out … He does not search for consensus, but is more concerned with doing what is right and then molding consensus. This is a rare attribute that only the most effective leaders have.”

In recent years, in addition to his cantorial duties, he has devoted himself to clinical pastoral education, becoming certified through Phoebe Ministries in Allentown. It’s something he plans to continue as he phases out of his full-time role – in addition to becoming cantor-educator emeritus of Temple Beth El – focusing on being a “sacred listener” of someone else’s life story.

Wartell is also looking forward to performing and lecturing on a program he’s calling “From Moses to Motown: What Makes a Soul Singer Move the Soul.”

“It’s the whole concept of how my relationship with The Four Tops, growing up in Detroit, and my life story has fueled this work of working together and can continue to fight the prejudices that people feel when they don’t know someone,” he said.

But he will of course miss his daily interactions with congregants – “this isn’t goodbye, it’s ‘I’ll see you on the street, maybe even in the synagogue or the church or the mosque, or at a Four Tops concert’” – and they will miss him.

“In business we seek out people and companies that, by their actions, say what they do and do what they say,” said Bruce Reich, Temple Beth El president. “When it comes to seeking racial equality, religious freedom and social justice, Cantor Wartell is one of these people. He openly does so in his words, in song and by his actions. Representing Temple Beth El, we can all be proud of his accomplishments in this field and that he will be recognized with this award.”

“Our Bible and our liturgy refers to God speaking through a ‘kol dimamah dakah,’ a ‘still small voice.’ For many, hearing that still small voice is a challenge,” said Mark L. Goldstein, executive director of the Jewish Federation and a Temple Beth El congregant and long-time friend of the cantor. “But Cantor Wartell helps us all hear the still small voice of God. And sometimes Cantor Wartell’s voice is not so small, especially when he calls attention to, and inspires action for, human rights, tolerance and prejudice reduction. He is a restless advocate for civil rights and bridging differences to promote that which unifies.”

The Jewish Federation’s Community Celebration & Annual Meeting on Thursday, June 14, at 6:30 p.m. at the JCC of the Lehigh Valley is free and open to the community. To join Cantor Wartell for dinner or participate in a tribute at the Mortimer S. Schiff Memorial Golf Tournament on Monday, June 18, at Lehigh Country Club, CLICK HERE.