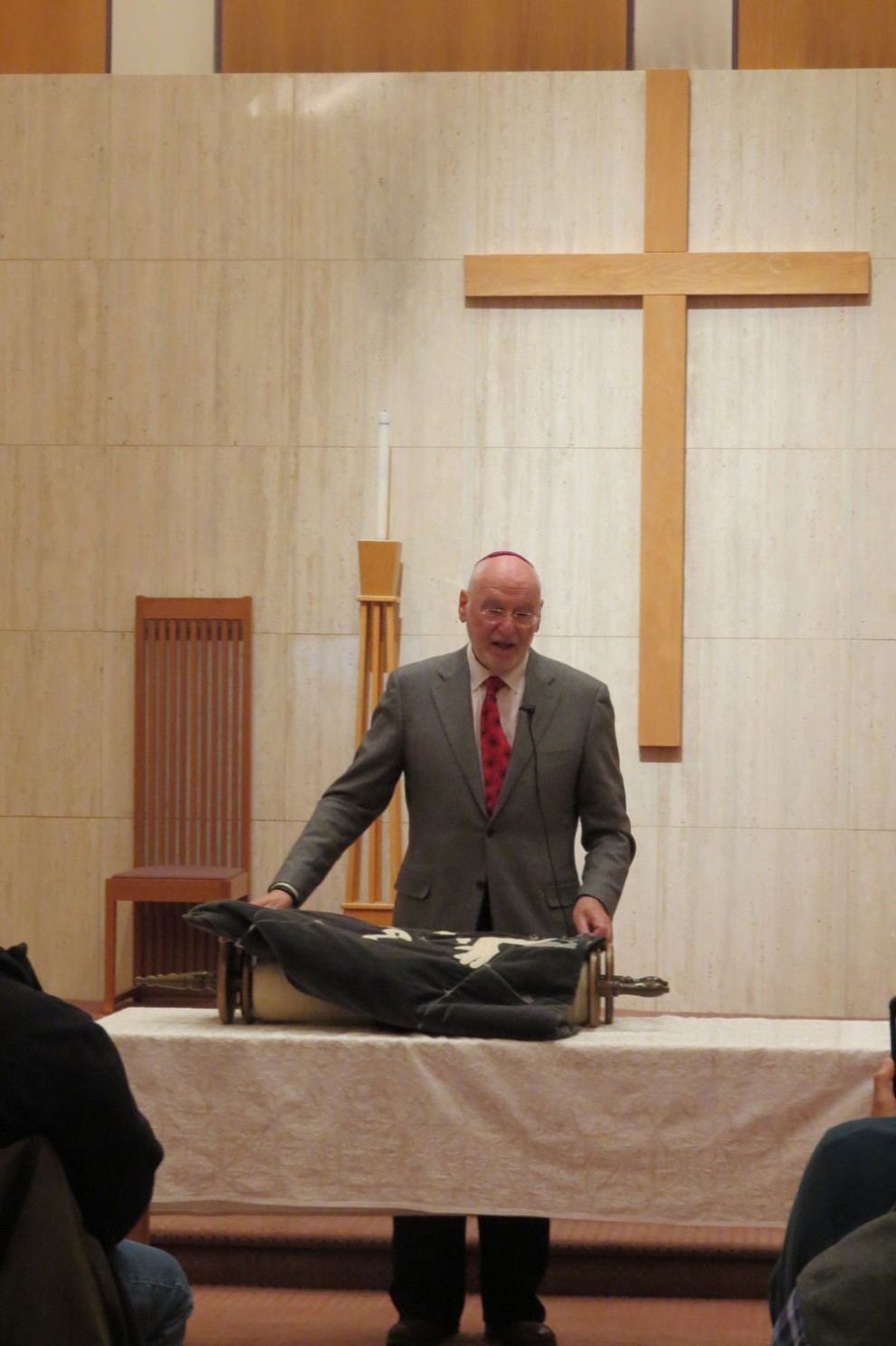 When members of the Lehigh Valley Jewish community learned that Jeffrey Ohrenstein, chair of the Memorial Scrolls Trust, was going to be in New York City, they knew they had to ask him to extend his visit to include Pennsylvania.

Many community members were not aware of the fact that the Lehigh Valley is home to five Torah scrolls rescued from the Holocaust and protected by the Trust, which Ohrenstein oversees in London. With Ohrenstein’s visit, however, not only the Jewish community, but also the entire Lehigh Valley was invited to learn the remarkable story of how these scrolls were saved and came to be housed here at Congregation Brith Sholom, Congregation Keneseth Israel, Congregation Sons of Israel, the Jewish Day School and Temple Beth El.

Ohrenstein had a jam-packed schedule in Allentown on Feb. 7, which, as he noted, was “a very auspicious day.” It was exactly 55 years to the day that the 1,564 Torah scrolls which had been moldering in a warehouse that had once been a synagogue in Prague were delivered in a truckload to London.

As Ohrenstein explained first at a presentation to the Jewish Day School, then at a Lunch & Learn put on by the Community Relations Council of the Jewish Federation of the Lehigh Valley at the Jewish Community Center, and finally at an interfaith program hosted in the chapel at First Presbyterian Church of Allentown, Jews had been thriving in the regions of Bohemia and Moravia for a thousand years before World War II.

“There’s always anti-Semitism everywhere,” said Ohrenstein, “but there was much less there, and they were on the whole protected.” That was leading up to and especially during the “Golden Age” in “our area”—as Ohrenstein refers to the regions from which the Torahs came—of the 18th and 19th centuries. Then came the Nazis, stationed in Prague, murdering tens of thousands and displacing more.

Soon, the Jewish leaders of the communities that were left saw an opportunity. The head of the Nazi government in Prague was interested in collecting books. The Jewish communities, many made up of as few as 30 people each, sent not only their Torahs, but also all of their Judaica in 1942 to the Jewish Museum in the capital city.

“It really is a miracle that it survived,” said Ohrenstein. He explained that though virtually everybody from the museum lost their lives, over 200,000 items from all these little communities were saved.

“Just imagine,” he told the crowd at the Lunch & Learn. “They filled some 30 buildings in the center of Prague. And virtually nothing in Prague was destroyed by bombings, which is another miracle. Our treasures survived the war.”

Unfortunately, three years later, there was a Communist coup. The beautiful Judaica items were kept on display, “but the Torahs were nothing to them,” said Ohrenstein. From 1958, they sat rotting until they were finally rescued once and for all and taken to a synagogue in London on Feb. 7, 1964.

From there, the Trust was set up so that these Torah scrolls could be used properly. Only about 10 percent were kosher, and those were given to Orthodox synagogues. The rest were in various degrees of decay. Some were able to be repaired and made kosher again, or at least restored to good enough condition for a more progressive synagogue to use them. Some are only able to be displayed as part of the exhibit at the Trust in London.

These Czech scrolls, as they are commonly known – though some have origins in other countries and are written in other languages – have made their way across the world. Synagogues and other groups can be entrusted with a Torah scroll on loan, to be used for special occasions and as educational tools for their communities. Scrolls are today found in Europe, Oceania, South America, Israel and especially in the U.S., which hosts over 1,000, the vast majority of the collection.

“These scrolls are survivors and silent witnesses of the Shoah,” said Ohrenstein. “They represent all the lost Jews. Use them to tell the story. Use them for interfaith work and for intrafaith work.”

Ohrenstein concluded his talk at the Lunch & Learn with high praise for the Lehigh Valley Jewish community gathered there. “I’m going to be talking about you,” he said, “because you are a community who stand together regardless of how you worship. I think it is wonderful. You’re the answer to my prayers.”

With one last reminder, he impressed upon the crowd, “The Torah is the one thing that binds all Jews together.”
As for interfaith efforts, he added, “We Jews must also respect the fact that the Torah is revered by Christians and Muslims,” going on to say that it is important to remind people of what they have in common rather than what divides them.

That is what Ohrenstein himself was working on that very night as he stood up one more time to speak, this time to a crowd of a few dozen of different faiths at First Presbyterian at an event which the Rev. Jack Haberer, their lead pastor, called “a no-brainer.”

“We sprang on the opportunity” to host, he said in his introduction of the evening program.

Ohrenstein graciously told the story once again of the precious cargo that had made its way to his homeland on this 55th anniversary, taking time to explain how the Torah is the most important part of Shabbat services and every synagogue needs a Torah.

After his presentation, the crowd was full of questions, reverently gathering round the scroll which normally resides at KI. Like all of the Czech scrolls, it was fulfilling Ohrenstein’s dream of being useful.

“In my opinion,” Ohrenstein said. “None of our Czech scrolls should ever be considered out of commission and buried, because a Czech scroll can always be used to educate.”