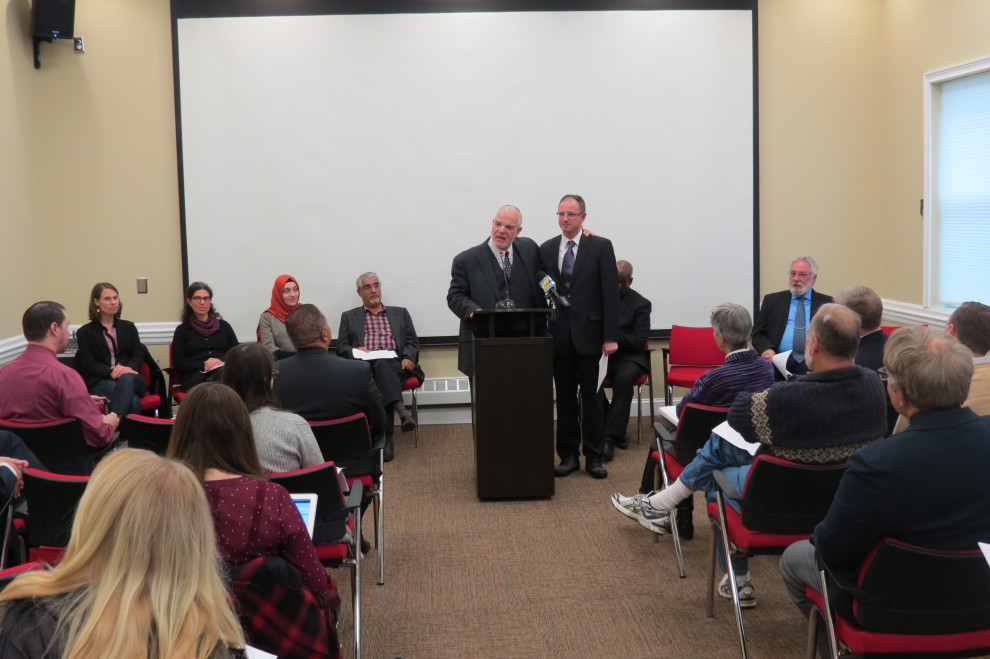 By Michelle Cohen
HAKOL Editor
On Dec. 12, the Lehigh Conference of Churches joined with Jewish and Muslim organizations from around the Lehigh Valley to assert their dedication to religious tolerance and release a statement condemning bigotry and division that have become more commonplace in today’s discourse.
The event was held at Respect Graduate School, the only Muslim college in the Lehigh Valley capable of granting a Master of Arts in Islamic Studies, as a way to offer solidarity with Muslims in the Lehigh Valley.
The statement itself was read during the program after an opening prayer from Yasemin Aksoy, director of communication and student recruitment at Respect. It begins by acknowledging the “climate of tension and anxiety in our community and nation,” immediately following that with an assertion that “we lift our voices together, as people of faith, to remind our brothers and sisters that we are all Americans united not only by the concord of our national policy but also by the call to build the ‘Beloved Community.’”
While each signee vowed to combat the “global state of division and discord, fueled by intolerance and xenophobia” by “challeng[ing] this dynamic and express[ing] our witness against it,” the statement also urged Lehigh Valley residents to join in this fight. The statement implored people in the Lehigh Valley to “act respectfully toward others, including those representing other faiths and ideological perspectives,” to “refrain from personal attacks on individuals or groups while maintaining the right to disagree vigorously” and to “set an example for our youth in finding ways to settle disputes peacefully and in refraining from acts of bigotry and bullying.”
The statement was signed by 89 people, including Allentown Mayor Ed Pawlowski, Jewish Federation Executive Director Mark L. Goldstein, Rabbi Seth Phillips of Congregation Keneseth Israel, Cantor Ellen Sussman of Temple Shirat Shalom, Cantor Kevin Wartell of Temple Beth El, Rabbi Danielle Stillman of Lehigh University and the Rev. Dr. Peter Pettit, director of the Institute for Jewish-Christian Understanding at Muhlenberg College.
“I think that we all need to lend our voice against any kind of hatred or bullying that might be happening, and as a clergyperson this was the natural form for me to do it in,” said Stillman, director of Jewish student life at Lehigh, one of four people who spoke briefly following the reading of the interfaith statement at the event.
“I talked about how a foundational commandment in Judaism is loving a stranger, and that means both people who are different from us – strange in the sense of different – and also strange in the sense of oppressed or marginalized in society, and this is a major orientation of Judaism that we have to do this,” Stillman said. “I also talked about how when we come together as a group like this, we have to be careful to maintain our own differences and celebrate them and try to not all be the same but try to reach out from within those differences.”
Stillman was joined by Rev. Janel Rice, vice president of the board of the Lehigh Conference of Churches, Mr. Mohammad Khaku, an Islamic community activist, and Shree Patel, youth director at the Shree Swaminarayan Spiritual & Cultural Center in making such statements.
At the end of the event, Pickens was joined by Wartell, who offered concluding remarks. “I used Emma Lazarus’s quote on the Statue of Liberty – give me your tired, your poor, your huddled masses yearning to be free,” Wartell said. “America is a welcoming land and Jews should never lose sight of that.”
Wartell stressed that the event was “just the beginning” of what he hopes will be a more interwoven community in the Lehigh Valley. He encouraged attendees to take steps like, “[supporting] immigration policy [and] watching out for people of color being persecuted because of their difference. It’s not so long ago we were being persecuted because of our difference, and we still are. We shouldn’t be too comfortable. We’re a minority and we’re the first ones to be reminded of that when [people] start talking about differences.”
One important distinction Wartell made was that “Jews need to care not just about when swastikas show up but when things happen in other communities. If we don’t care about other minorities, why should they care about us? It’s very selfish only to worry about ourselves.”
As for why this effort should come from the clergy, Wartell said, “I represent a community, and we’re all soldiers in this struggle toward protecting the minorities of our society. If the faith community doesn’t lead, then the message will be lost on the most important generation – young people. We need to implement youth groups meeting with each other, communities dialoguing and breaking bread with each other. Otherwise it’s all whipped cream with no cake.”
Wartell began this effort himself: on Friday, Dec. 16, he planned to be at the Islamic Center at 5:30 p.m. before Shabbat to "break bread with them to wish them a good Shabbat."