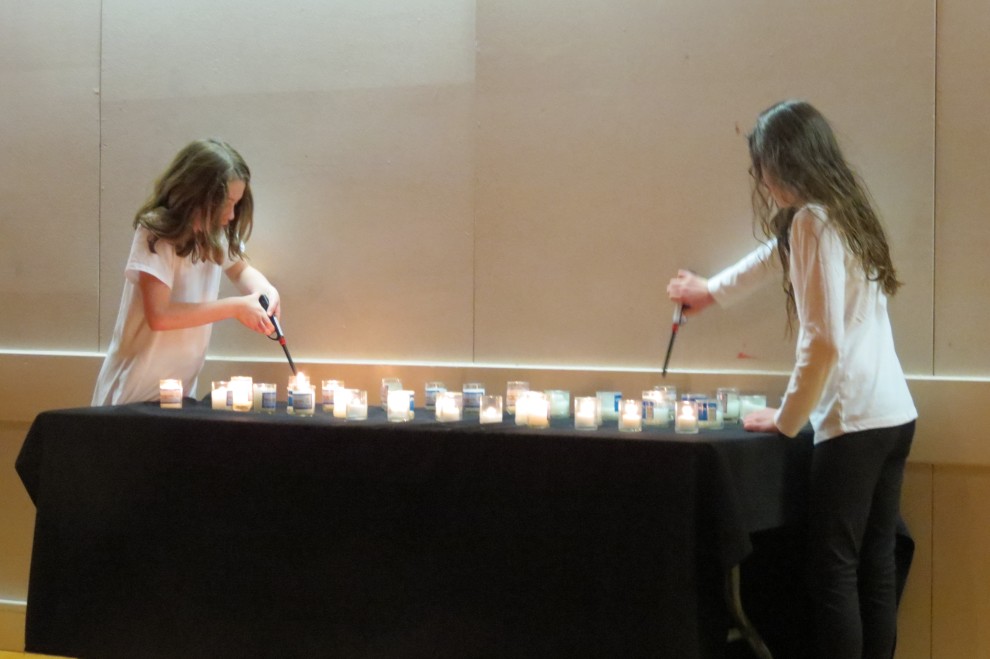 The program began with a solemn reading of names courtesy of local children and teenagers, including JDS students. They read aloud the names, birth and death years, and the way each victim died for an hour. This was followed by a reading from “Night” by Elie Wiesel, z”l, led by Federation President Mark H. Scoblionko, who posed the age-old Passover question of “why is this night different from other nights?” to explain why we choose this night to remember the Jews whose lives were taken away.

The main program focused on Cologne, Germany, the oldest Jewish community in the country with a presence recorded in 321 BCE. Out of 15,000 Jews who lived in Cologne in 1939, only about 600 survived the Holocaust. One of these 600 was Rudolf Romberg, z”l, who fled with his mother to the United States when he was 16. During the ceremony, Rudolf’s son Len shared his story, and Agnes Steffens, who grew up Roman Catholic in Cologne during the Holocaust, shared another perspective of the events.

Steffens, who recorded her interview ahead of time, is a 90-year-old Catholic woman living in Allentown whose father, Julius Scheuer, was a Righteous Gentile who helped Jews escape from Cologne during the Holocaust. Only six years old at the beginning of the war, Steffens recalled how her father lost his construction business because he wouldn’t join the Nazi Party, and taught his seven children that their religion meant to care for all people. “They feel like we do,” she recalled her father saying, adding that she learned of his heroic actions after the war.

After she spoke, Len Romberg, the son of Rudolf Romberg, shared his father’s story. He shared his father’s memories of hiding in a Christian neighbor’s house during Kristallnacht, when his family’s business and home were destroyed, and planning to leave for the United States after. Rudolf and his mother were scheduled to take the USS Manhattan from Hamburg in August 1939, but thanks to his foresight about the impending war, they went to France instead to take the boat a few days earlier. They found out in Paris that the USS Manhattan was no longer going to stop in Hamburg.

"Had [Rudolf] listened to his mom, they would have gotten to Hamburg and waited for a ship that did not come and I probably wouldn't be here today,” Len said. World War II broke out the day after the ship set sail, and six days later, Rudolf and his mother reunited with their family in the United States, where he eventually made a living as a furniture maker. Rudolf and his family lived in Allentown for 25 years.

The two speakers’ stories were followed with a community memorial candle lighting where Allentown residents honored their family and friends lost in the Holocaust. Six tall candles were lit in the presence of a Torah from a small town in Czechoslovakia with no Jewish survivors.

The ceremony concluded with the "El Maley Rachamim" prayer from Cantor Ellen Sussman of Temple Shirat Shalom, the Mourner’s Kaddish led by Rabbi Seth Phillips of Congregation Keneseth Israel and the singing of Hatikvah by the Temple Beth El junior choir.