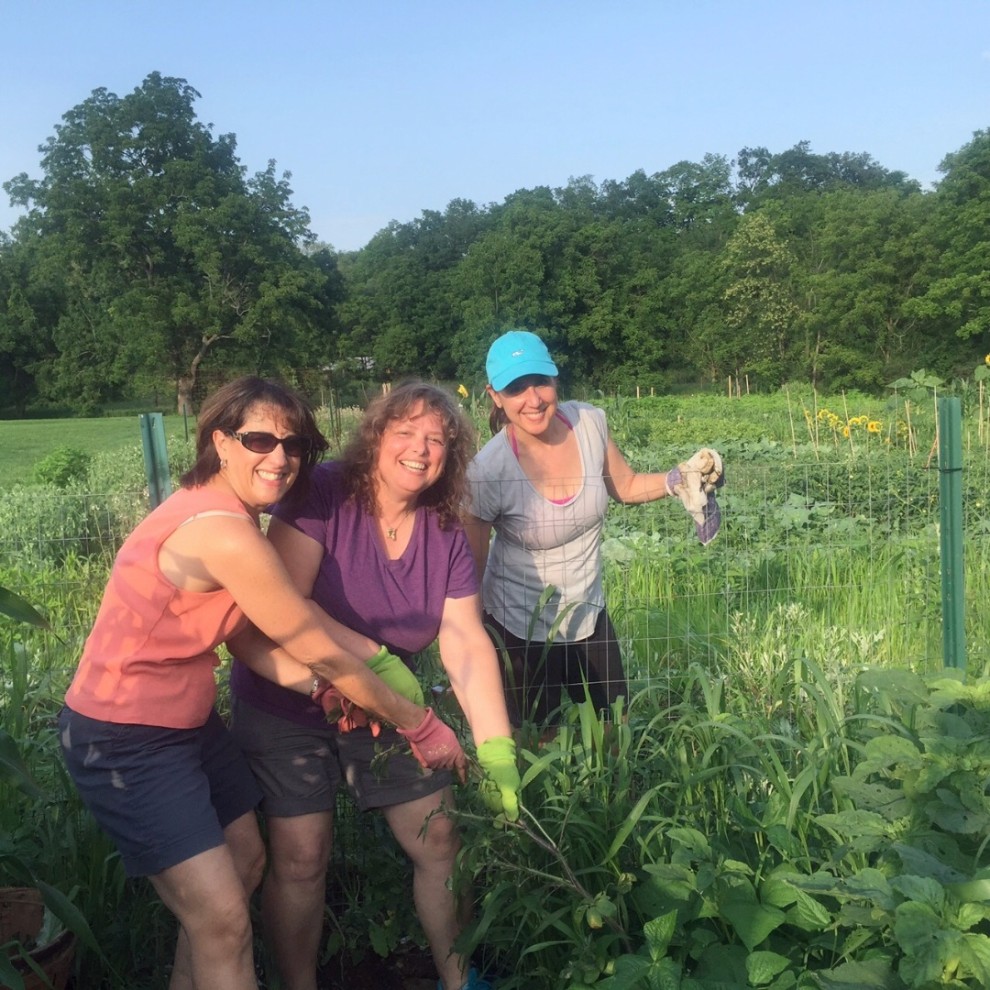 On July 8, volunteers from across the Jewish Lehigh Valley gathered at Camp Olympic in Emmaus to work their community garden plot together. “I can’t believe how big everything has grown,” said volunteer Alicia Zahn. “Last month, everything had barely sprouted.”

The volunteers were there as part of a larger effort coordinated by master gardener Bob Yoder of The Barn. When he started the interfaith gardening operation seven years ago, Yoder’s mission was twofold: to provide produce to the underserved populations of Lehigh Valley and to bring people of different classes, races and faith backgrounds together. “Our main goal is build unity in the community,” Yoder said.

Today the gardens are tended by over 40 volunteers at sites in Whitehall and Macungie as well as the site at Camp Olympic in Emmaus that the Jewish volunteers tend monthly.

At Camp Olympic, the volunteers from Temple Beth El, Congregation Keneseth Israel, Muhlenberg Hillel and BBYO are led in their gardening efforts by master gardener Joe Vincent, a Lutheran who was brought into the project by Yoder. Vincent was intrigued by the idea of “bringing together people of different religions to do something productive and informal.”

Besides the social impacts of the project, the crops them¬selves are thriving. The main crops Vincent has focused on are corn and string beans, but the garden also boasts neat rows of sweet potatoes, Swiss chard, and beets.

Vincent said while the growing season got off to a rough start with a late frost, the rain has helped produce a successful crop of vegetables. “We almost lost the sweet potatoes to the frost,” he said, pointing to the now flourishing rows of plants, “but they came back.”

“The fresh produce is truly appreciated by Allentown's underserved population,” said Amy Morse, one of the volunteers helping to weed the garden at Camp Olympic. Morse also noted that the project has given them “opportunities to work alongside our Allentown neighbors, forming friendships as well as growing veggies.”

If you are interested in volunteering at the community garden, the next scheduled session at Camp Olympic is Aug. 12 at 6:30 p.m. For more information, contact Bob Yoder at 610-762-5379 or e-mail him at drbob@ptd.net.