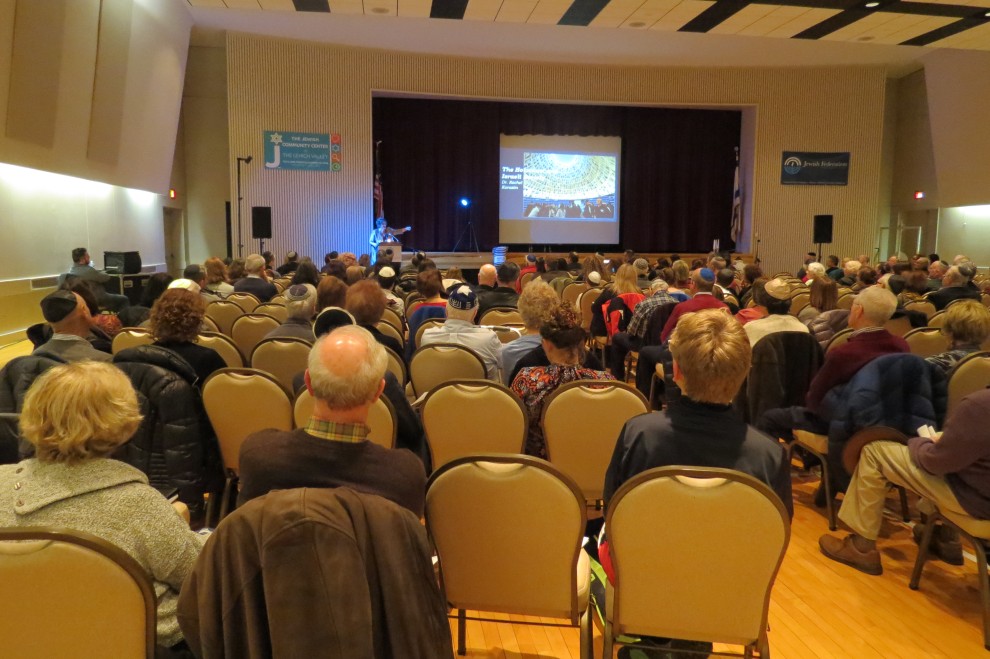 On April 11, a packed room of people gathered to commemorate the Holocaust in a variety of ways, including a feature presentation based on the Holocaust’s perception in Israeli society.

The ceremony opened with an hour-long recitation of names in which children and teenagers from the Jewish Day School and other local schools read aloud the names, years of life and place of death of many Holocaust victims. Some of the names were submitted by members of the community who are survivors or descendants of survivors.

The formal program began with an introduction from Tama Tamarkin, the granddaughter of a partisan, who spoke about the evolution of the Holocaust narrative in Israel. After the national anthem, which was led by Cantor Ellen Sussman, attendees watched a video of 600 Holocaust survivors and their children and grandchildren singing a song called “Chai,” the Hebrew word for life. The video was filmed at a program held in Israel by Koolulam, a social musical movement reaching across Israeli society.

The highlight of the evening was a lecture titled “The Holocaust and Israeli Society,” which was presented by Dr. Rachel Korazim, a Jewish education consultant specializing in curriculum development for Israel and Holocaust education.

“The story doesn’t end when the Holocaust ended,” Korazim began her talk, and she went on to tell a story beginning in 1946 with her Orthodox mother and Zionist father moving to Israel. This dichotomy played a large part in her talk, especially an exercise of imagination in which she asked audience members to imagine themselves in two roles on the opposite end of the religious spectrum: a Satmar Chasid, and an almost-assimilated Jew, both having survived the Holocaust.

The Satmar survivor, Korazim said, would have followed the Satmar rebbe to Williamsburg to find remnants of his old community, and when he asked the rebbe why the Holocaust happened, he would answer that it was a punishment for the sin of Zionism, based on three ancient oaths from the Babylonian Talmud. The imagined almost-assimilated survivor, on the other hand, went to a Zionist youth group as a teenager, then forgot much of his Judaism. He would reconnect with old friends in Israel and make aliyah, only to ask the new country’s leadership why the Holocaust occurred. The answer here, Korazim claimed, would be that Jews were not Zionist enough.

Israel, thus, was at the heart of the debate about the origins of the Holocaust from the beginning, and for survivors who made aliyah like Korazim’s mother, who arrived young, pregnant and on the verge of divorce, they found themselves in a strange position. Korazim recalled a story told to her in which her mother was asked, on her first day of living on the kibbutz, why she had been so stupid for listening to the Nazis and following their orders. By the time Korazim was 8 years old, this was the explanation she herself received from her mother, and she noted that the early Holocaust narrative came from taking responsibility for what happened based on the Israeli ideas of strength.

In Israel, she said, the message of the Holocaust was mainly about the partisans, ghetto resistance fighters and others who fought against the Nazis militarily, rather than the survivors of Nazi atrocities. In 1959, when the Knesset gathered to decide a day to commemorate the Holocaust, they chose the day of the Warsaw ghetto uprising to promote this message. The day was given the full name of Yom HaShoah v’haGvurah, or “The Day of Remembering the Holocaust and Heroism.”

Growing up in Israel, Korazim remembered, “The heroes for children were the partisans, rebels, parachutists, and ‘Holocaust’ referred to the victims who went like sheep to the slaughter.”

This began to change in 1961, with the Eichmann trial, where the state’s prosecutor made references in his speech that Korazim likens to him calling himself Aaron and the victims Moses (in reference to Aaron serving as Moses’ less-important mouthpiece for someone who had trouble speaking for himself). “It was time to hear [the victims],” Korazim said, “and Israel started listening.”

A convergence of events in the 1970s – the 1972 Munich Games, in which Israeli Jews were killed and presumably did not fight much against the hostage-takers, and the 1973 Yom Kippur War, in which Israelis were captured by the enemy and not questioned for not fighting back – led to a shift in perspective on Holocaust victims and a greater understanding of their situation. Israelis, at this time, began learning the value of survival and telling the Holocaust story – and it is the story of this cultural shift that Korazim tries to convey to students today in her career.

After Korazim spoke, survivors and their children and grandchildren lit memorial candles and held a moment of silence before the El Maley Rachamim prayer and Mourner’s Kaddish. The night ended with Hatikvah, Israel’s national anthem, reminding attendees of the country at the center of the night’s discussion.