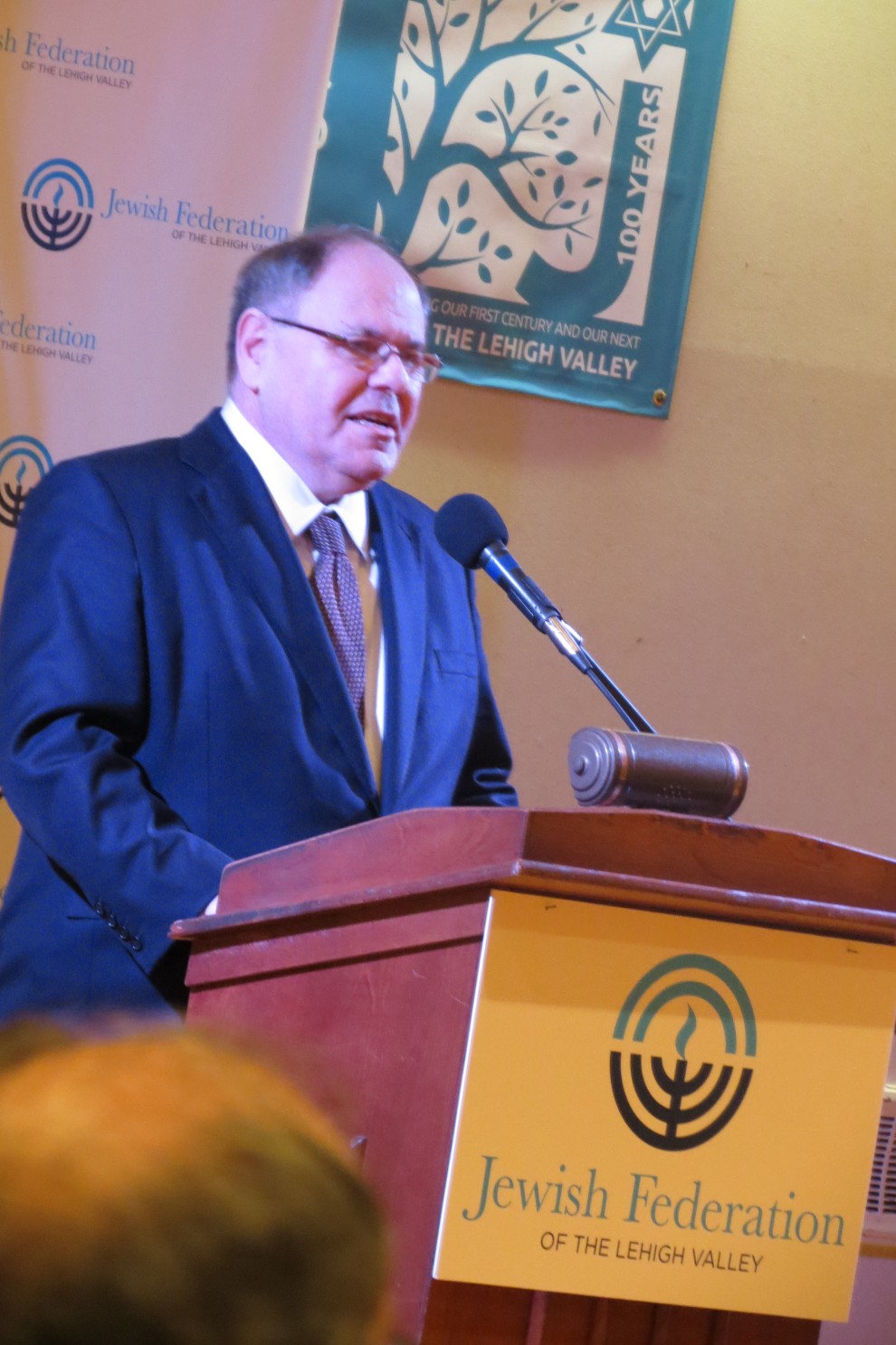 Over the past 70 years, Israel has transformed: economically, culturally and diplomatically, Consul General Dani Dayan said on his first visit to the Lehigh Valley on Feb. 6.

“We enter the year in which we celebrate our 70th anniversary not without problems, with a lot of problems, as every country in the world, but with a lot of optimism,” said Dayan, who is based in New York. “Not without challenges, but with the strong belief in our capability to meet those challenges.”

In the 1980s, for instance, Israel was experiencing a 400 percent annual rate of inflation. Today, the bank of Israel has foreign exchange reserve dollars in excess of $100 billion, Dayan said.

“If you had a shekel in your pocket, you virtually could feel the value slipping underground. Every minute that passed, the shekel lost value,” the ambassador said of the economy in the ‘80s. “Today the shekel – which is incredible, I still have to pinch myself to believe that it’s true – the shekel is the strongest currency in the world.”

While Israel has been targeted by the Boycott, Divestment and Sanctions movement spreading on some American college campuses, the ambassador urged the Lehigh Valley Jewish community members gathered at the JCC to see beyond the headlines.

“An economic boycott of Israel is ridiculous,” he said. “I don’t know of any serious company that does not do business with Israel.”

“The cultural boycott of Israel is even more ridiculous,” he continued.

“There is this guy Justin Bieber who came to Israel already three times. I would like him to start boycotting us,” he said to laughter from the audience.

Dayan then proposed a challenge to those gathered: He asked them to go home, take a globe, spin it and put their finger randomly on any place on the globe. “Most probably, it will be a country with which Israel improved dramatically its relations the last five to 10 years,” he said.

In India, which didn’t even recognize Israel 25 years ago, today the relationship between the two countries can only be described as “intimate,” he said.

“And then we go to China,” he continued. “With China, I’m not implying that we have the same kind of intimate political relationship, but yes we do have a very strong economic relationship.”

In the same day last year, the Israeli prime minister was on a visit to China while the Israeli president was visiting Vietnam, Dayan said. “Those were countries that didn’t even recognize Israel,” he said.

Israel has also greatly improved its relations in Africa, he said.

In the 1960s and ‘70s, Israel staunchly supported African nations like Kenya, Ghana and Rwanda, but after the Yom Kippur War, Arab oil-producing countries like Saudi Arabia and Libya exerted immense pressure on African nations to cut relations with Israel, and they did, he said.

That was the situation for a few decades, but recently, “an incredible change happened.”

Dayan also addressed Israel’s relations with America, and how he sees it as this generation’s “extra obligation” to make sure they continue to be strong.

“And I will tell you my friends, for me it would be a tragedy if each side of the ocean, we fulfill only one of those mitzvahs. If we Israelis guarantee our existence and you guarantee the continuity of Jewish life. I think that our obligation as Israelis is to help you, to keep the continuity of Jewish life, and your obligation as Jewish Americans is to help us keep Israel strong, safe and thriving. And even if there are problems and differences of opinion, and even differences of culture, let’s never forget, even if we are Jews, our marriage is Catholic … Divorce is not one of the options.”