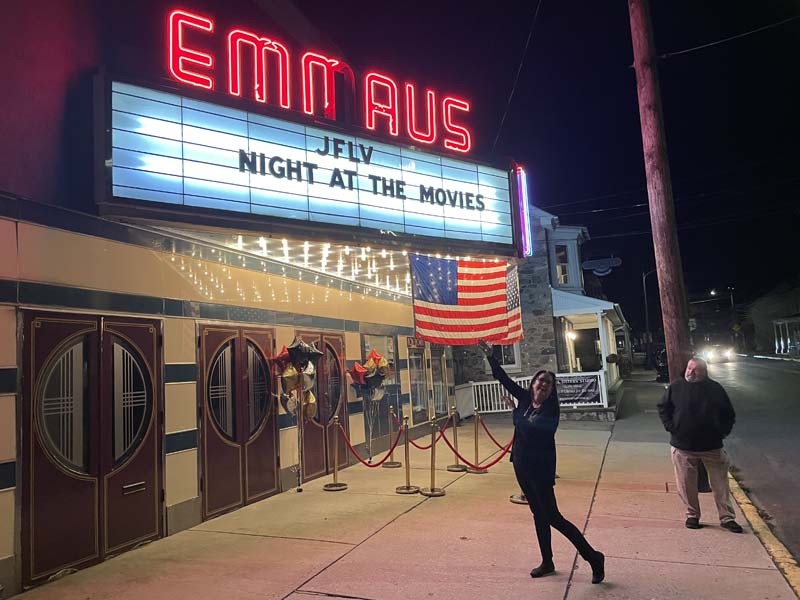 “Rock in the Red Zone” is a choppy film. That’s not a criticism. The choppiness is exactly right for a film representing life in the Israeli city of Sderot.

A regular day for one of the musicians at the heart of this documentary might begin with a drive to work being interrupted by a siren warning of an incoming missile from Gaza, a sprint to a bomb shelter, and an anxious wait for the threat to subside, and might end with a dinner date, and maybe another siren. The Lion of Judah and Pomegranate Society of the Jewish Federation of the Lehigh alley spread out inside Emmaus Theatre on November 14 to watch the documentary along with its writer, director and producer, Laura Bialis. The film is a oignant reminder, as the Federation’s 2023 Annual Campaign for Jewish Needs was beginning, of the mportance of the Federation’s continuing mission to help those in need.

“I haven’t watched the movie in years,” Bialis told the audience after the credits rolled. “It’s hard to believe I lived that.”

A native of Los Angeles, Bialis learned about Sderot from press clips a friend sent her in 2007, a time when Hamas and Islamic Jihad were firing rockets continually into the city from Gaza, a half mile away. When she found out that rock bands were using bomb shelters as clubs to perform their original music fusing Western and Eastern traditions, she headed there to start filming what would be released in 2014 as her fourth feature-length documentary.

“Coming from LA,” Bialis says on screen, “I felt like I had gone back in time.” In a way, she had. When missiles target a place hundreds of times a year, as had been happening to Sderot since 2001, visible signs of progress tend to fade.

The definitive moment of Sderot as a city under attack comes after Prime Minister Ariel Sharon pulls 10,000 Jewish settlers out of Gaza and the West Bank in 2008. The hope is that the concession will encourage peace.

It doesn’t work. Instead, the attacks get worse. One particular night, the scene turns especially surreal, with fires raging, people running and ambulance lights flashing. “It feels like it’s on TV,” says Avi Vaknin, the film’s featured musician. Bialis adds, “That night I became Sderoti.”

Protesters take to the streets the next day, some 10,000 of them, demanding change. There’s a resiliency captured in this public display that stands for the film’s theme of strength in the face of opposition – resiliency of the musicians, of other Sderotis and of Israelis in general.

This time of heightened chaos and tragedy is juxtaposed against a particularly uplifting moment of joy and hope for Vaknin and Bialis. “Avi proposed to me in a bomb shelter,” Bialis says. “I said yes.”

When Egypt brokers a cease-fire, Vaknin and Bialis take advantage of the ensuing quiet to hold an actual wedding. “Here in this traumatized town,” Avi says, “I felt love, and a sense of community I never knew was missing.”

But the cease-fire soon ends. Vaknin and Bialis decide to move father from Gaza, to Tel Aviv and Vaknin’s family there.

Over the years since then, things have changed. The incoming rockets have gotten larger and stronger and are able to fly farther. Cities that had been relatively safe back when the shorter-range missiles could reach only so far as Sderot have become targets.

That includes Tel Aviv. “Last May,” Bialis told the crowd after the film ended, “a rocket landed on a car right next to my in-laws’. Just like random. It’s just the reality now.”

Bialis stayed in Israel but did return to Los Angeles for a while. She offered a startling commentary to audience members who had just witnessed all those troubling filmed scenes of Israel.

“Actually I don’t feel safe sending my kids to Hebrew school” in the United States, she said. “Everyone has guns.”

“For me, it’s safer in Israel, as crazy as that sounds.”