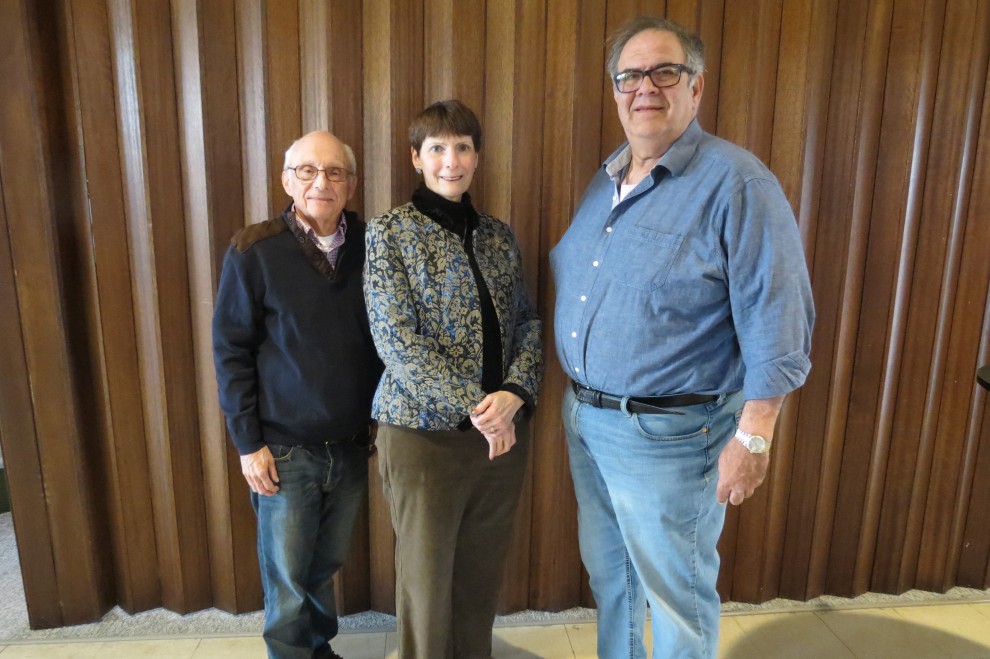 Ninety people from Easton came together to celebrate Passover this year. The community event, which was held at Bnai Abraham Synagogue, was a collaborative effort with Temple Covenant of Peace in which the sisterhood presidents put together a volunteer crew to manage the event. New and old friends joined together to make matzah balls and chicken soup, and to sing familiar songs. This is one of many recent events which will hopefully herald a formal partnership between the two synagogues.

“Easton is a wonderful community, and a growing community, but hasn’t grown quite as quickly in the Jewish area … this is a very good time for us to get together, utilize one building, services, educational and social activities, and turn them all into one,” said Jerry Weisberger, Bnai Abraham’s frequent board president of 15 years.

“Now is the right time more than ever,” said TCP board President Mark Gutman, who has been in this role for three-and-a-half years. “Our philosophies are more aligned. We have a lot more in common than not in common.”

The process of combining the synagogues began with this aspect. TCP, which is a Reform congregation, and Bnai Abraham, which is a Conservative shul, currently share Rabbi Melody Davis as well as services, events and a religious school.

Some problems that may have seemed large are turning out wonderfully well. “We find that our differences are minimal at best” in terms of denomination, Gutman said. “We have a lot more in common than not in common.”

The process of combining the synagogues began with this aspect. “In order to attempt to bring both synagogues together in working order, we first had to go to the rabbi, who has been very gracious and very willing to step in and fulfill the religious aspect of the situation, which is making both congregations – one Conservative, and one Reform – feel at home with the services over which she presides,” Weisberger said.

“We started out performing a Saturday morning service for Bnai Abraham, and continuing with Friday night services [at TCP], and the rabbi is doing the best to blend those so that the congregations feel a desire to attend as much as they possibly can,” Weisberger continued. “So, we built around that. Since we have both Shabbat services on the weekend, we were then able to expand to other holidays during the rest of the year.” As a result, “everybody starts to come together and feel as one, and hopefully, when we are able to turn this 100 percent into a synagogue that not only functions like we are now, as one, but in actuality, serves as one, then the job will be primarily complete, and all we’ll have to do is make little tweaks.”

In her role as the rabbi of both congregations, Davis has been attempting to create a service with rituals and melodies that fit both groups of people.

“Bringing together TCP and Bnai Abraham has been a very interesting journey for me,” said Davis, who trained as a pluralistic rabbi – meaning that she trained to serve “Am Yisrael (the people of Israel), not any particular denomination.”

“As any rabbi will tell you, every congregation does things their own way. They’ve all got their own customs, and it’s your job as the rabbi to learn what those customs are and to go with them,” Davis continued. “For me, stepping into Bnai Abraham was not alien territory in any way. I grew up Orthodox, raised my children conservative, I’m the kid who didn’t color in the lines, and I truly never understood denominationalism. To me, Jews are Jews, and that’s the bottom line. When people ask me what we're going to be, my response is Jewish!”

During her time at TCP, the synagogue has changed ideologically and moved toward the center, and Bnai Abraham has moved closer to Reform, which means that “bridging is not as complex as it might have been in the past,” Davis said. In terms of Saturday morning services, “the big difference at Bnai Abraham is that they do musaf. We’re talking 15, 20 minutes – big deal! If musaf makes the congregation comfortable, we do musaf, it’s not going to kill anybody.”

For any larger differences, the two ritual committees have been working together “actively and avidly,” Davis added. “Events have been happening at both temples, as have services, and people are coming, and what more can a rabbi ask?”

For issues like the building, which can be difficult considering congregants’ attachments to the building they remember attending for years, the solution is unorthodox. Both buildings will be placed on the market, and they plan to “let the real estate gods decide” whichever building would sell first, Gutman said. Other issues, like the cemeteries, remain to be decided; frequent meetings between both synagogues’ boards work together to smooth this process.

At the heart of the matter remains a great desire to serve the Jewish community of Easton in the best way possible. In addition to appealing to unaffiliated Jews who may be more comfortable with an interdenominational synagogue, Davis believes that the merger will enable the new synagogue to be “more able to serve this community."