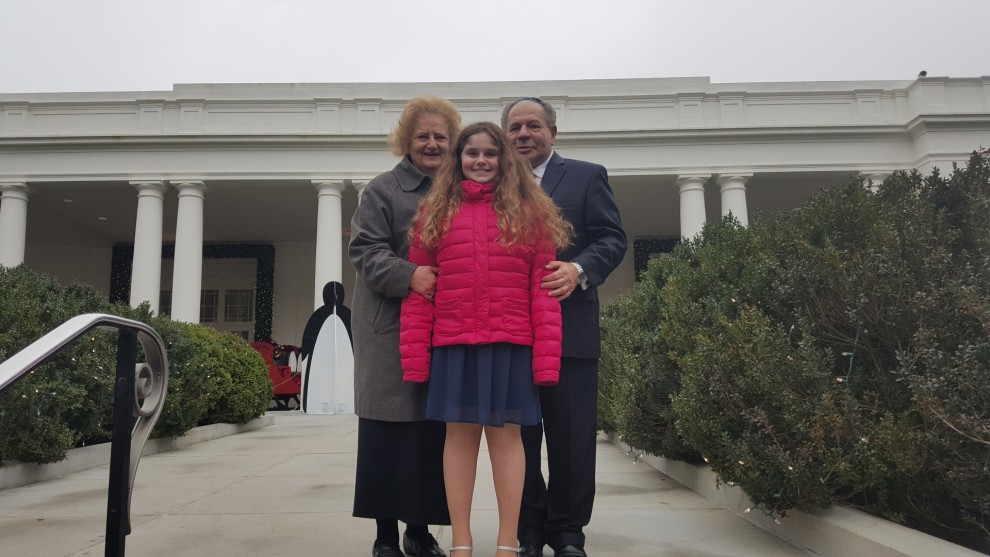 By Jeanette Eichenwald
Special to HAKOL

Once upon a time, a menorah was invited to the White House for a Chanukah celebration and to spend the night – sounds like the first line in a book, but in actuality it is quite true. The story of the Eichenwald family menorah is by now quite well known. It was brought to Dachau concentration camp and lit by the inmates of cell block 16. It was discovered by a Nazi guard and hurled into the fire, yet the menorah miraculously escaped and ultimately, through a series of miracles, found its way home to my family. This year, the menorah and my family were invited to attend the Chanukah celebration hosted by President and Mrs. Barack Obama and attended by President and Mrs. Reuven Rivlin of Israel.

The White house was beautiful, filled with festive decorations, beautiful music and kosher delicacies. We wandered from room to room marveling at the privilege of being in this place that holds so much history and majesty. Standing in the very front of the invited guests, Laura Rigge, editor of HAKOL, my husband Eduardo, our granddaughter and I witnessed the majestic lighting of the menorah by the President of Israel followed by the traditional blessings. I could feel the presence of my parents and in-laws and what they would have felt as survivors of the Holocaust seeing a Chanukah celebration in the White House, a symbol of freedom and democracy of this great nation. At the same time, Eduardo and I watched the awe in our granddaughter Alex’s face and in that moment realized that the menorah and its story would be safe in her hands as a symbol of Jewish tradition and heritage.

As we joined in the singing of the beautiful “Maoz Tzur” tears welled up in my eyes as I thought of how our menorah that had once been hurled into the flames of a fire for destruction was now in an honored place in the White House. The miracle of the Jewish people continues throughout the ages and the eternity of the Jewish People remains.