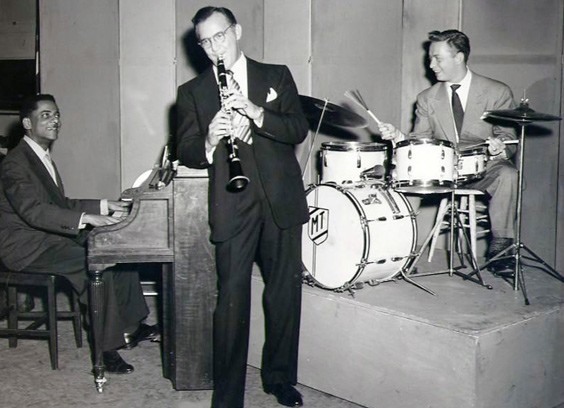 By Sara Vigneri
Special to HAKOL

Watching Fred Astaire sing Irving Berlin’s “Let's Face the Music and Dance” in the 1936 movie “Follow the Fleet,” it’s hard to imagine this song would become a jazz favorite. It’s a typical Hollywood number; the orchestra plays a long musical intro until Astaire finally pipes in with carefully worded vocals and then ends the song with a sweeping choreographed dance number. Twenty years later, Ella Fitzgerald recorded “Let's Face the Music and Dance” and the combination of her strong, deep voice with the jazzy horn section and toe-tapping drums creates an entirely different song – Astaire’s version is a wonderful Hollywood spectacle, Fitzgerald’s invites you to actually get up and dance.

The Hollywood and Broadway origins of jazz standards (or songs generally accepted into a jazz musician’s repertoire) will be the topic of both discussion and performance on Sunday, April 3, at the JCC. Ron Sunshine will lead his 10-piece orchestra, playing songs such as Irving Berlin’s “Cheek to Cheek,” originally sung by Astaire in the 1935 movie “Top Hat.” Jewish composers like Berlin, Richard Rodgers and Lorenz Hart ("The Lady is a Tramp") and George Gershwin wrote songs for the stage and screen that would eventually land themselves in the Great American Songbook to be performed by the jazz greats in the ‘50s and ‘60s.

“These Jewish songwriters lived in the musical melting pot of New York City,” said Sunshine, a band leader and recording artist living in Allentown. “Different influences melded together from the various Jewish immigrants living among African-Americans who came to New York from the south. There was a lot of cultural interplay.”
Between musical numbers, renowned musicologist Dr. Judah Cohen will discuss the men behind the music.

“That so many songwriters in this era identified as Jewish opens up really interesting conversations of what it meant to be Jewish during that time period,” said Cohen, the Lou and Sybil Mervis Professor of Jewish Culture at Indiana University. Dr. Cohen will examine why Jewish composers of the 1930s had such an impact on jazz in the 1950-60s.

“We will explore larger conversations about identity that stem from these composers, who happen to be Jewish,” Cohen said, “and ask ourselves the question, can we talk about Jewish identity through the notes?”
The Sunshine orchestra will include two vocalists, a five-piece horn section and original arrangements by trumpeter Brian Pareschi, who (like the entire band) has played on Broadway. After the intermission, the Sunshine orchestra will play a set for dancing.

"This event will be different from any other Berman Center program that we've ever done,” said Dr. Hartley Lachter, chair of the Berman Center at Lehigh University, which is co-sponsoring the event. “It interweaves a presentation by an internationally renowned scholar with a full scale performance by a gifted musician and I’m grateful for the partnership with other institutions in the Lehigh Valley that made this kind of public event possible."